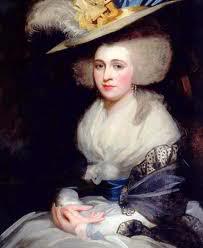 October is recognized as National Breast Cancer Awareness Month. The primary purpose is to promote regular mammograms as the most effective way to save lives by detecting breast cancer at its early stages. Nabby Adams Smith (1765-1813), daughter of John and Abigail Adams, was diagnosed with breast cancer at the age of 45. Of course, she had none of the advantages we now have to help her fight the disease.

Abigail Amelia Adams Smith
Nabby was shy and somewhat withdrawn, but a striking woman, with long red hair, a round face, deep-blue eyes and a porcelain complexion. She commanded respect simply because of the quality of her mind and her unfailing dignity.

Abigail Amelia Adams was born in Braintree, Massachusetts, on July 14, 1765, the firstborn of Abigail Adams, the most prominent woman in early American society, and John Adams, Founding Father and second President of the United States. They began calling her “Nabby” when she was still a baby. By age 10 Nabby was a mature girl and helped her mother with farm chores while her father and brother were away on diplomatic missions.

In 1785, while John Adams was the U.S. minister to Great Britain, he called for Abigail and Nabby to join him in London. Shortly afterward Nabby met William Stephens Smith, who was serving as her father’s secretary. Born on Long Island, New York, in 1755, Smith had graduated from Princeton University in 1774.

William Smith had served in the Revolutionary War as an aide-de-camp and fought in several battles in New York and New Jersey: the Battles of Long Island, Harlem Heights, White Plains, Trenton and Monmouth. He was on the staff of General Lafayette in 1780 and 1781, then transferred to the staff of .

Though he was 10 years her senior, Nabby married William Smith at the American minister’s residence in London on June 12, 1786. In the spring of 1787, Nabby’s first son, William Steuben, was born. Three more children followed, all born in New York: John Adams, Thomas (who died at age one), and Caroline Amelia.

The Smiths returned to America in 1788. After settling in Jamaica, Long Island, Nabby expressed her disenchantment with the formalities of social interactions in New York City and complained of the wasted time and energy society spent at parties and dinners. She generally stayed at home on Long Island, where, she told her mother, “I have as much society as I wish in our own family.”

Nabby did, however, become more involved in society after the arrival of her parents in New York City when John Adams became vice president to George Washington in 1789. That same year, President Washington appointed William Smith the first United States Marshal for the District of New York, which brought him into the company of high-ranking officials.

Accordingly, the Smiths dined with the Washingtons at least once a week, often sharing the company of Governor and Mrs. Clinton of New York and others. However, the socializing was short-lived; when the new government moved to Philadelphia in 1790, William and Nabby, with their three children, remained in New York.

While William Smith had seemed a suitable husband at first, he proved to be “wholly devoid of judgment,” in Abigail’s words. Abandoned on numerous occasions while her husband went “seeking his fortune”, Nabby showed herself to be a true child of her parents, strong-willed, uncomplaining and able to keep herself and her children together under one roof, earning the unstinting respect of John and Abigail and of her brother John Quincy.

Smith became involved in a series of speculative ventures that led to constant financial difficulties for his family. Nabby’s parents used their influence when possible to obtain government jobs for William, but this did not keep their daughter from poverty. Although William financial decisions were poor, to say the least, Nabby was devoted to him.

In 1800 President John Adams (1797-1801) appointed William Smith surveyor of the Port of New York. In 1806, Smith shipped men and supplies out of New York to support the Venezuelan Revolution led by Francisco de Miranda. Smith was found out, but claimed his orders came from President Thomas Jefferson and Secretary of States James Madison.

Smith was put on trial in New York for violating the Neutrality Act of 1794. Judge William Paterson ruled that the President “cannot authorize a person to do what the law forbids.” Smith was found not guilty, but was stripped of his position and any steady means of income.

The Smith family would continue to have financial difficulties due to poor investments and business ventures. Abigail Adams’ concern for her daughter’s welfare continued; mother and daughter even discussed divorce, almost unheard at that time. In 1807, the Smiths moved to a small farm in central New York State, and began to recover socially and politically.

In 1810, Nabby felt a lump in her breast and was diagnosed with breast cancer at the age of 45. The lump grew ominously, in spite of the efforts of local healers and their potions. Nabby wrote to her parents in February 1811 that her doctor had discovered “a cancer in my breast.” As soon as they received the letter, they wrote back urging her to come to Boston for medical advice.

In June 1811, with the lump visible to the naked eye, a desperate Nabby returned to Massachusetts, accompanied by her husband and daughter Caroline. John and Abigail took Nabby to see several physicians in Boston, who prescribed hemlock pills to “poison the disease.”

Soon after her arrival in Braintree, Nabby wrote to family friend (and Founding Father) Dr. Benjamin Rush, describing her condition and seeking his advice. She told Rush that the tumor was large and growing, but that it was “movable” – not attached to the chest wall. Rush found the news encouraging, because it was more likely that the surgeon could remove all of the diseased tissue.

Knowing that Nabby was already at the Adams home, Dr. Rush wrote his reply to John:

I shall begin my letter by replying to your daughter’s. I prefer giving my opinion and advice in her case in this way. You and Mrs. Adams may communicate it gradually and in such a manner as will be least apt to distress and alarm her.

After the experience of more than 50 years in cases similar to hers, I must protest against all local applications and internal medicines for relief. They now and then cure, but in 19 cases out of 20 in tumors in the breast they do harm or suspend the disease until it passes beyond that time in which the only radical remedy is ineffectual. This remedy is the knife.

From her account of the moving state of the tumor, it is now in a proper situation for the operation. Should she wait till it suppurates or even inflames much, it may be too late… I repeat again, let there be no delay in flying to the knife. Her time of life calls for expedition in this business…

I sincerely sympathize with her and with you and your dear Mrs. Adams in this family affliction, but it will be but for a few minutes if she submits to have it extirpated, and if not, it will probably be a source of distress and pain to you all for years to come. It shocks me to think of the consequences of procrastination.

On October 8, 1811, a mastectomy was performed on Nabby Adams by Boston’s most skilled surgeon, Dr. John Warren, without any anesthesia, in an upstairs bedroom of the Adams home. Her parents were holding her hands during the brutal surgery and, according to John, she never cried out once.

Exact details of the operation are not available, but it was certainly typical of early nineteenth surgery. Warren’s surgical instruments, lying in a wooden box on a table, were quite simple – a large fork with two, six-inch prongs sharpened to a needle point and a wooden-handled razor. In the corner of the room a small oven, full of red-hot coals, heated a flat, thick iron spatula.

Nabby entered into the room as if dressed for a Sunday service. Dr. Warren had her sit down in a reclining chair, belted her to the chair and had her unbutton the top of her dress and slip it off her left shoulder, exposing the diseased breast.

Warren raised her left arm above her head to raise the breast, while another physician held her raised arm and another stood behind her, pressing her shoulders and neck to the chair. Warren then straddled Nabby’s knees and thrust the two-pronged fork deep into her breast, then raised it up, lifting the breast from the chest wall. With the large razor he sliced into the base of the breast until it was completely severed.

But the tumor was larger and more widespread then Warren had anticipated. There were tumors in the lymph nodes under her arm; he cut there as well and pulled out nodes and tumors. To stop the bleeding, Warren applied the red-hot spatula to the wound, cauterizing the blood vessels, then sutured the wounds and told Nabby that it was over. The whole procedure had taken less than twenty-five minutes, but it took more than an hour to dress the wounds.

Nabby endured a long recovery. For months after the operation she was weak and feeble. She kept her limp left arm in a sling. Going back to the wilds of western New York was out of the question, so she stayed with her mother, hoping to regain strength.

What sustained all of them during the ordeal was the faith that the operation had cured the cancer. Within two weeks of the surgery, Dr. Rush wrote John Adams congratulating him “in the happy issue of the operation performed upon Mrs. Smith’s breast…her cure will be radical and durable. I consider her as rescued from a premature grave.”

By May 1812, seven months after the surgery, Nabby Smith felt well again. She returned home to the small farm in New York, but within a few weeks she began to suffer from headaches and pain in her spine and abdomen. A local physician mistakenly attributed the discomfort to rheumatism.

When Warren had removed her breast, tiny malignant cancers were left behind. By the spring of 1813 some of those had grown into tumors of their own – visible in the scar and on the skin as well. Her doctor in New York changed the diagnosis: the cancer was back – everywhere.

Nabby declined steadily, finally telling her husband that she “wanted to die in her father’s house.” William Smith wrote John and Abigail in May; they prepared Nabby’s room and waited for her arrival. The trip was unimaginably painful – more than three hundred miles in a carriage, over bumpy roads.

When they finally reached Braintree on July 26, Nabby was suffering from grinding, constant pain. Her appearance shocked John and Abigail – she was gaunt and thin and wracked by a deep cough. She groaned and sometimes screamed with every movement. Huge, dark circles shadowed her cheeks.

Nabby’s pain was so unbearable that Abigail slipped into a depression so deep she could not stand even to visit her daughter’s room. John Adams cared for their dying daughter, feeding her, cleaning her and seeing to her personal needs, combing her hair and holding her hand. He also administered pain killers, but nothing seemed to help.

The elderly John Adams grieved in a letter to his old friend Thomas Jefferson:

Your friend, my only daughter, expired, yesterday morning… in the 49th year of her age, 46 of which she was the healthiest and firmest of us all: since which, she has been a monument to suffering and to patience.

John and Abigail Adams never truly recovered from Nabby’s death. Abigail died on October 28, 1818, at the age of 73. John Adams lived eight more years, passing away on July 4, 1826, the 50th anniversary of the Declaration of Independence. Thomas Jefferson died the same day at Monticello.