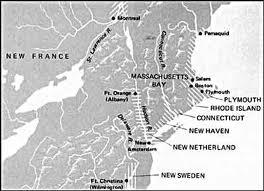 The Puritans were a religious group in England. They did not want to separate from the Anglican Church like the Pilgrims. They wanted to purify the church. In 1629, the Massachusetts Bay Company obtained a charter allowing it to trade and colonize in New England. Its Puritan stockholders envisioned the colony as a refuge from religious persecution.

The charter, which ceded lands from three miles south of the Charles River to three miles north of the Merrimack, allowed the company to establish its own government, subject only to the king. Its government was to be placed in the hands of a governor, deputy governor, and eighteen assistants, to be elected annually by the company.

With an increasingly corrupt Church and the jailing of prominent Puritans, settlement in America grew more and more attractive. The Massachusetts Bay Company decided to move its entire operation to the New World, out of range of the Crown’s watchful eye.

In October 1629, the General Court of the Company elected lawyer and devout Puritan John Winthrop as the colony’s first governor. Winthrop began raising money, locating and provisioning ships and attracting a wide range of passengers.

Not all of the people who signed up were devout Puritans. Winthrop and the other Company leaders were careful to include settlers with the skills necessary to insure the Colony’s success—craftsmen, doctors, servants, and laborers—regardless of their religious affiliation.

On April 8, 1630, the Arbella and three other ships set sail with some four hundred men, women, and children. The ships initially made land at the small settlement at Salem, another English colony where eighty people had died during the previous winter.

Winthrop and other Company officers encouraged the members of their group to settle on new land to the south. Some of Salem’s settlers had developed a friendship with the Separatists at Plymouth Colony, and the Puritans did not want to associate with them.

Winthrop found a clear spring of water on a peninsula called Shawmut. There he took up residence, and founded the town of Boston. Newtown was the first capital, but Boston was soon chosen as the seat of government. Roxbury, Charlestown, Watertown, Dorchester, and other towns were founded.

In the fall of 1630, the Company called the first General Court in the new colony. All male residents were designated as freemen, but they only had the right to choose the colony’s assistants. All legal and judicial powers were retained by the assistants themselves, who elected the governor and deputy governor. They later restricted the right to vote to only those freemen who were Puritans.

The Bay Colony government deeded title for townships to groups of male settlers, who then distributed the land among themselves. And though men of the highest rank received the largest plots, all men received enough land to support their families.

The first winter at Massachusetts Bay Colony was a harsh one. Starvation and disease took the lives of two hundred people, and another two hundred returned to England in the spring. But the core group of Puritans persevered.

At the center of each Puritan village was a meeting house, where the men of the village met to make the laws and settle the problems of the community. Winthrop and most of the original assistants were reelected in each of the first few years of the colony.

The Puritans wanted every child to read the Bible, so they passed a law requiring parents to teach their children to read. Another Puritan law required every village with 50 or more families to have a school. In villages with less than 50 families, children went to schools run by women in their homes. These were called Dame Schools.

Freedom of religion was not the law in Massachusetts Bay Colony. The Puritans came to America to practice their religion as they pleased, but they did not extend that right to others. Settlers who did not follow Puritan teachings were not allowed to own land, and some were banished from the colony.

Roger Williams, minister of the church in Salem, condemned the Colony legal establishment. He advocated the separation of church and state, as the Pilgrims had done at Plymouth Colony. He also objected to the Puritans’ practice of seizing rather than purchasing Native American lands. The magistrates banished Williams from the colony in 1635. He settled with his followers in Rhode Island and established the town of Providence.

The towns of Massachusetts Bay Colony thrived. Building their own vessels and sailing them to ports all over the world, the shipmasters laid the foundation for a trade that was to grow steadily. By the end of the colonial period, one third of all vessels under the British flag were built in New England.

Colony merchants and shippers discovered that rum and slaves were profitable commodities. One of their most enterprising trading practices of the time was the triangular trade. Traders purchased slaves off the coast of Africa with New England rum, sold the slaves in the West Indies, and bought molasses which they sold to the rum producers back home.