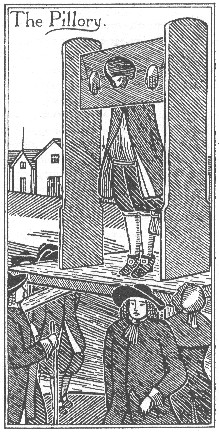 During the seventeenth century, the combined New England colonies formed a virtual Puritan commonwealth. They had separate governments, but their hopes, their laws and their past history were almost identical. The entire political and social system they established was built on the Puritan religion.

As a whole, they professed to love liberty, but the individual Puritan was restrained by strict laws that governed every area of his life – even his family relations. A man could not kiss his wife in public. A Captain Kimble, upon his return from a three-year voyage, kissed his wife on his own doorstep, and he spent two hours in the pillory for his lewd and unseemly behavior.

Beginning in 1630, as many as 20,000 Puritans emigrated to America to gain the liberty to worship God as they chose. Unlike the Pilgrims who came to Massachusetts in 1620, the Puritans believed that the Church of England was a true church, though in need of major reforms.

Life of the Puritans
The Puritans lived in villages that consisted of four city blocks. Within these villages, relatives were placed together. The Puritan family was the basic unit of society, in which the mother and the father had specific tasks. The husband was in charge of his wife and had all of the authority in the home. He was to provide the needs of the household, love and protect his family, and teach his children about life, which revolved around God.

Puritan life consisted largely of farming. Both the men and women contributed to this way of life by planting and weeding from day to day. Even though the majority of men were ministers, their professional trade also consisted of a variety of other tasks. The women wove cloth, made candles and soap, tended the garden, worked in the fields and cut wood.

Since God was the most important part of their lives, prayer was a major part of their daily lives. Puritan families meditated and prayed before sleep at night, upon rising in the morning, on Saturdays and at church services. The Puritans saw their mission as fulfilling God’s plan, and hardships along the way were tests from God.

Puritan Religion
Massachusetts Bay Colony was settled by men and women who refused to compromise their religious convictions, and they made the dangerous journey to America in order to worship God their way. Yet, when they arrived in the New World, they instituted the same intolerance they had fled from England to escape.

The Puritans closed their minds to any alternatives. They believed that there was only one true religion and that it was the duty of the civil authorities to impose it, forcibly if necessary, upon all citizens in the interest of saving their souls. Nonconformists could expect no mercy. Dissenters would be punished, maybe even executed.

Their isolation in the New World, the harshness and dangers of their new lives, and their sense that they were a Chosen People, insured that American Puritanism would remain more severe than that which they had left in England.

Does the Length of My Sleeve Suit Thee, Sir?
Laws governed the way the Puritans dressed. One law forbade the wearing of lace. The length and width of a lady’s sleeve was decided by law. A woman wore an undershirt, called a shift. Over that, she wore a corset and long petticoats. Her outer clothing was either a gown, or a waistcoat (fitted jacket) and skirt. Her skirts must be long enough to drag the floor—it was unladylike to show any ankle!

A lady wore a close-fitting white linen cap, called a coif, to cover her hair. In foul weather, she wore a cloak, a sleeveless outer-garment that was worn draped over the shoulders, and was usually made of heavy wool. Cloaks might have no collar at all, a square sailor’s collar, or a hood. Her shoes and stockings were much the same as the man’s.

Law and Courts
The Massachusetts Bay colonists brought with them the law they knew—the local law and customs of their section of England. And local English law was often very different from the law in the king’s courts in London. Some historians have compared the government in the early American colonies to that of an English town.

The charter of Massachusetts Bay Colony was similar to that of a trading company. It granted a tract of land, and recognized that the land had to be governed. But in many respects it was like the charter of a business corporation. The officers and all the freemen constituted the General Court, somewhat like the stockholders of a corporation. The court of assistants—the governor, the deputy governor, and their aides—was similar to a board of directors.

Massachusetts Bay Colony evolved its own individual legal system, and eventually its own social and political system. Much of their law was dictated by their own tight set of beliefs. Life in the colonies was precarious at first. Necessity was the supreme lawmaker.

In tiny starving settlements, there was no separation of powers. The same people made the rules, enforced them, handled disputes and ran the colony. A special court system grew up and divided into parts only when there were enough people, problems and territory to make it worthwhile.

The government and laws of Massachusetts Bay Colony went through many changes between 1630 and 1639, when a more permanent system of courts was established.

During the course of the early seventeenth century, immigrants, many of them Puritans, established a group of autonomous North American colonies:

SOURCES
America as a Religious Refuge