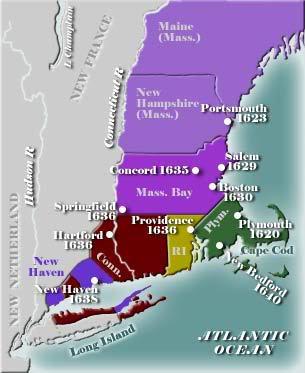 Early New England
Fleeing England because of religious persecution, the Puritans were relatively well-off, and their faith gave them courage and discipline. Their aim was not to make a profit, like the Virginia colonists, but to create a City on a Hill—a god-fearing community.

In 1630, a large contingent, led by John Winthrop and the Massachusetts Bay Company, and called the Great Migration, set up a republic at Boston. Their settlement expanded successfully throughout the 1640s. By 1660, with a population of 33,000, this was the most successful New England colony.

Love and Marriage
In Puritan society, the average age for marriage was higher than in any other group of immigrants—the average for men was 26, and for women age 23. There was a strong imperative to marry—those who did not were ostracized.

Banns had to be published before a marriage could take place. Publication of the Banns was the public announcement by the minister during a normal church service that two people wish to marry, and an invitation to the congregation to declare any unlawful reason why they should not marry.

Puritan Women
The Puritans believed that Eve’s role in original sin exemplified woman’s inherent moral weakness. They feared that women were much more susceptible to temptations, and that they possessed qualities that could be exploited and become sinful. A woman was to love, obey, and further the interests and will of her husband. If she was a good helpmate, she had fulfilled her God-given duty.

Women were, of course, subordinate to men. In the new colonies, the same laws existed as in England. Married women were not allowed to possess property, sign contracts, or conduct business. Their husbands owned everything, including the couple’s children. Divorce was rare, and a separation would mean loss of access to the children. Only widows who did not remarry could own property and run their own businesses.

Puritan women were expected to bow to their husbands and fathers, and to obey their orders, but they supported each other. During childbirth, they excluded the men, and comforted the mother-to-be with beer as well as prayers.

Women had to dress modestly, covering their hair and arms while in public. Women found guilty of immodest dress could be stripped to waist and whipped until their backs were bloody—would that not expose their bodies? Public humiliation could include confessing one’s sins in front of the whole church congregation.

In New England, women had one decided advantage—Puritanism regarded men and women as spiritual equals. The men might be the church leaders, but women were believed to be more disciplined and more moral. Though they had no official standing, women exercised a lot of informal influence. Few men, especially the religious leaders, could survive the widespread disapproval of a community’s women.

Puritan Society
But men and women were not equals in Puritan society, which was tight knit and intolerant of anyone who did not conform to the rigid social norms. Family relationships were of paramount importance, but divorce was allowed in instances of adultery, fraudulent contract, willful desertion, and physical cruelty. Sex was supposed to be confined to marriage and offenders were punished severely—but the men more severely than the women.

Families were larger among the Puritans than any other group. They did not approve of doing anything to prevent pregnancy. Ninety percent of all Puritan children had Biblical names. The most common names for boys were John, Joseph, Samuel and Josiah; the most common for girls were Mary, Elizabeth, Sarah, and Hannah. These were all names of Biblical persons of great virtue. The hope was that the child would follow in the footsteps of their namesake.

Puritans were strict parents who loved their children but believed their wills needed to be broken—due to the basic depravity of human nature. This was achieved by strict and rigorous supervision. They tried to use mental discipline and love but, if it did not work, they were quick to use physical constraints. They practiced the custom of sending out, in which children were sent to live with other families for training, discipline, or apprenticeship.

Puritans had a great respect for the elderly and ranked people according to age. The elderly had the best seats in the meeting house and held the highest offices. They believed that God gave the elders long life for a purpose—to influence the younger generation to salvation.

SOURCES
Coming to America: The Puritans