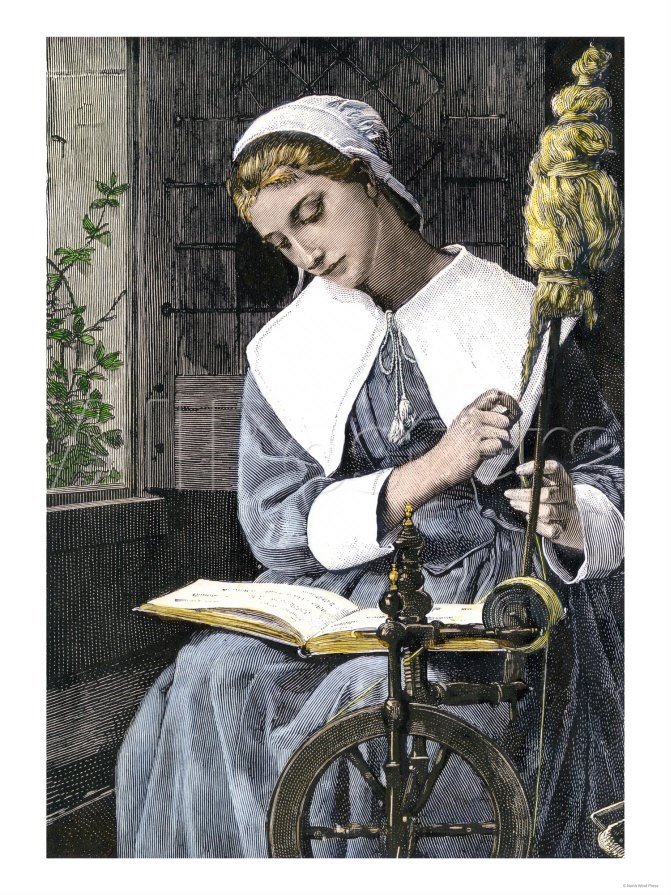 Massachusetts Bay Colony was a man’s world. Women did not participate in town meetings and were excluded from decision making in the church. Puritan ministers furthered male supremacy in their writings and sermons. They preached that the soul had two parts, the immortal masculine half, and the mortal feminine half.

Women and children were treated harshly in the Puritan commonwealth. Women were viewed as instruments of Satan. Children were regarded as the property of their parents. If any child was disobedient to his parents, any magistrate could punish him with a maximum of ten lashes for each offense.

Love and Marriage
In Puritan society, the average age for marriage was higher than in any other group of immigrants — the average for men was 26, and for women age 23. There was a strong imperative to marry — those who did not were ostracized. The gender ratio was about 150 men to every 100 women.

Banns had to be published before a marriage could take place. Publication of the Banns was the public announcement by the minister during a normal church service that two people wished to marry, and an invitation to the congregation to declare any unlawful reason why they should not marry.

The Puritans believed that Eve’s role in original sin exemplified woman’s inherent moral weakness. They feared that women were much more susceptible to temptations, and that they possessed qualities that could be exploited and become sinful. A woman was to love, obey and further the interests and will of her husband. If she was a good mate, she had fulfilled her God-given duty.

Family Life
Families were larger among the Puritans than any other group. They did not approve of doing anything to prevent pregnancy. Ninety percent of all Puritan children had Biblical names. The most common names for boys were John, Joseph, Samuel and Josiah; the most common for girls were Mary, Elizabeth, Sarah, and Hannah. These were all names of Biblical persons of great virtue. The hope was that the child would follow in the footsteps of their namesake.

The Puritans were strict parents. They loved their children but believed their wills had to be broken — due to the basic depravity of human nature. This was achieved by strict and rigorous supervision. They tried to use mental discipline and love, but if it did not work, they were quick to use physical constraints. The Puritans practiced the custom of sending out, in which children were sent to live with other families for training, discipline, or apprenticeship.

Legal Rights
Women were, of course, subordinate to men. In the new colonies, the same laws existed as in England. Married women were not allowed to possess property, sign contracts, or conduct business. Their husbands owned everything, including the couple’s children. Only widows who did not remarry could own property and run their own businesses.

Women had to dress modestly, covering their hair and arms. Women found guilty of immodest dress could be stripped to the waist and whipped until their backs were bloody (would that not expose their bodies?). Public humiliation could include confessing one’s sins in front of the whole church congregation.

Women could divorce their husbands in certain circumstances — adultery, willful desertion, and physical cruelty. Sex was supposed to be confined to marriage, and offenders were punished severely.

Religion
The mainstream Christians were comfortable in Protestant England while the Puritans were persecuted because they questioned the authority of the established Church of England. So the Puritans left to seek a new life in America — to create a new society based on religion.

They needed faith to explain a world they did not fully understand and to give them fortitude to survive adversity, with the hope of a life after death. Anyone foolish enough to voice their doubts about the existence of God risked terrible punishment.

Massachusetts Bay Colony was organized in towns, the first being Boston. The church congregation of each town selected its own minister. The clustering in towns was ideal for having the minister and his aides keep watch on all the inhabitants. The congregation was ruled by its council of elders.

One Puritan moral imperative was strict observance of the Sabbath. The General Court was shocked to learn, in the late 1650s, that some people persisted in “uncivilly walking in the streets and fields” on Sunday, and even traveling from town to town and drinking at inns. The General Court passed a law prohibiting these crimes on Sunday.

If the criminals could not pay the fine imposed, they were to be whipped. To enforce the regulations and prevent the crimes, the gates of the towns were closed on Sunday, and no one was permitted to leave. Kissing one’s wife in public on a Sunday was also outlawed.

The Puritans believed in predestination — that God had already chosen who would be in heaven or hell, and each believer had no way of knowing which group they were in. One’s status did not necessarily correlate with good works or moral behavior on earth. It was not uncommon for Puritans to experience intense anxiety about their spiritual condition.

John Winthrop wrote in his Journal that a Puritan woman was driven to despair by her inability to ascertain whether she was one of God’s elect or one of the damned.

Having been in much trouble of mind about her spiritual estate, [she] at length grew into utter desperation, and could not endure to hear of any comfort, so as one day she took her little infant and threw it into a well, and then came into the house and said, now she was sure she should be damned for she had drowned her child.

Puritanism did regard men and women as spiritual equals. The men might be the church leaders, but women were believed to be more disciplined and more moral. Though they had no official standing, women exercised a lot of informal influence. Few men, especially religious leaders, could survive the widespread disapproval of a community’s women.