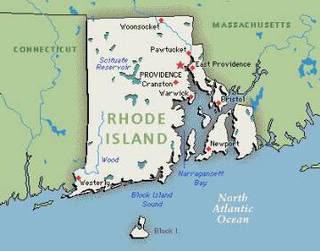 The Colony of Rhode Island
Scattered Europeans began to settle the area that would become Rhode Island as early as 1620, but the first permanent settlement was not established until 1636. When Roger Williams was banished from the Massachusetts Bay Colony for his religious beliefs, he took refuge among the Narragansett Native American tribe, who occupied the country at the head of Narragansett Bay. Canonicus, their chief, held the good man in high esteem, and presented him with a large tract of land, which the devout Williams named Providence.

A New England Colony
Other nonconformists followed Roger Williams to that region, including Anne Hutchinson and William Coddington, who founded Portsmouth in 1638. A short-lived dispute sent Coddington to the southern tip of Aquidneck Island (also purchased from the Narragansetts), where he established Newport in 1639. The fourth original town, Warwick, was settled in 1642 by Samuel Gorton, another dissident from Portsmouth.

These communities were founded on the principle of absolute freedom of conscience. Most of the settlers were people who couldn’t endure the rigors of Puritan theology, law, and custom. In fact, they couldn’t agree among themselves, and for many years Rhode Island was the most turbulent of all the New England colonies. Their soul liberty, as Roger Williams called it, apparently didn’t extend to civil matters.

To settle disputes over land titles and to dispose of town lands, Providence established in 1640 a court of arbitration consisting of five disposers, who served as a sort of executive board for the town. In all outward relations she remained isolated from her neighbors, pursuing a course of strictly local independence.

Portsmouth and Newport, for the sake of greater strength, united in March, 1640, and a year later agreed on a form of government which they called “a democratic or popular government.” They set up a governor, deputy governor, and four assistants, regularly elected, and provided that all laws should be made by the freemen or the major part of them. But it was only a was halfhearted effort—each town reserved complete control over its own affairs.

A Parliamentary Charter
Rhode Island was harassed for years by claims upon its territory by Massachusetts and Connecticut. Plymouth Colony, seeking a better harbor than that of Plymouth Bay, claimed the eastern mainland and the Hog, Conanicut, and Aquidneck Islands. Massachusetts Bay Colony claimed Pawtuxet, Warwick, and the Narragansett country in general. Connecticut Colony wanted to push her eastern boundary beyond the Pawcatuck River.

If each of these colonies made good its claim, there would be little left of the Rhode Island Colony. But the Rhode Islanders were plucky, and they successfully defended their rights. In spite of external encroachments and internal dissensions, the colony grew in strength and importance, and its trade extended in every direction.

Roger Williams secured a patent from the English Parliament in March 1643, which united the four towns into a single colony and confirmed their land claims. The charter was issued to the Incorporation of Providence Plantations in the Narragansett Bay in New England. It gave the people the power to govern themselves, but was simply a charter of incorporation—still no land grant.

A general meeting was held at Portsmouth consisting of the freemen from Warwick, Portsmouth, and Newport, and Providence. The patent didn’t state how affairs were to be managed, so the colonists worked out the problem in their own way. They refused to have a governor, created only a presiding officer with four assistants, constituted a court of trials for the hearing of important criminal and civil causes. No general court was created by law, but a legislative body soon came into existence consisting of six deputies from each town.

Before the Portsmouth meeting adjourned, it adopted a code of laws in which witchcraft trials and imprisonment for debt were forbidden, capital punishment was largely abolished, and divorce was granted for adultery only. In 1652, the assembly passed a noteworthy law against the holding of Negroes in slavery. These laws served adequately until the end of the English Civil War.

But the new patent didn’t bring peace to the colony. In 1649, Roger Williams wrote to Governor John Winthrop of Massachusetts Bay Colony:

Our poor colony is in civil dissension. Their last meeting [of the assembly] at which I have not been, have fallen into factions. Mr. Coddington and Captain Partridge, etc., are the heads of one, and Captain Clarke, Mr. Easton, etc., the heads of the other.

A Royal Charter
Dr. John Clarke then traveled to England to ask for a patent from the new king, Charles II, that would safeguard Rhode Island lands from encroachment by speculators and greedy neighbors. He succeeded, and the royal charter of 1663 guaranteed complete religious liberty, established a self-governing colony with local autonomy, and strengthened Rhode Island’s territorial claims.

It was the most liberal charter to be issued by the mother country during the entire colonial era. It united all the colonies into one, under the name Rhode Island and Providence Plantations. This is still the legal name of the State, which retains its two capitals, Providence and Newport, the Legislature meeting alternately in each. The charter of Charles II suited the people so well that it remained in force until 1842.

The religious freedom, which prevailed in early Rhode Island, made it a refuge for several persecuted sects. America’s first Baptist church was formed in Providence in 1639. Quakers arrived in Aquidneck in 1657, and soon became a powerful force in the colony’s political and economic life. A Jewish congregation came to Newport in 1658, and French Huguenots settled in East Greenwich in 1686.

In the 1680s, King James II attempted to consolidate all of England’s colonies in New England with New York and New Jersey under a single governor, and Rhode Island was reduced to a county of the Dominion of New England. James demanded the colonies’ royal charters be surrendered, but, like Connecticut, Rhode Island hid its charter and reasserted its separate existence when James II was overthrown in 1689.