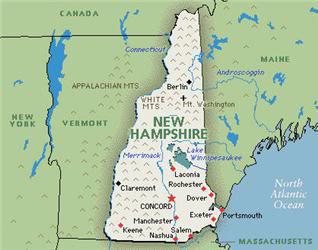 One of the New England Colonies, New Hampshire began as a proprietary colony – a colony in which private land owners retained rights that were normally the privilege of the state. King James I provided ships, provisions, and free land – with one important condition, that it always be subject to the English crown. So it remained until the Revolutionary War.

Land in the New World was granted to Captain John Mason who lived in Hampshire County, England. In 1623, Mason sent two groups of English settlers to establish a fishing colony in what is now New Hampshire, at the mouth of the Piscataqua River.

One of these groups settled at a place they called Pannaway, now the town of Rye, where they erected salt-drying fish racks and a stone house. The other set up their fishing stages on a neck of land they called Northam, afterwards named Dover.

Other towns followed. People living in these towns made their living by fishing and by trading furs and timber. Since the towns were near rivers that led to the Atlantic Ocean, settlers could easily get their goods to port and across the ocean to Great Britain.

Thus the settlement of New Hampshire did not happen because those who came there were persecuted out of England. They set out to make a profit from the very beginning. The colony’s income from fishing was increased by trade in furs and timber.

A company called the Laconia Company was formed in England in 1629, and the next year it sent a vessel to the mouth of the Piscataqua River, bearing a colony of settlers and a governor. Portsmouth, first called Strawberry Bank, was settled.

Captain John Mason died in 1635, without ever seeing the colony he had spent a considerable amount of money building. He had invested more than twenty-two thousand pounds in clearing the land, building houses, and preparing for its defense—a considerable fortune in those days.

In 1636, John Wheelwright emigrated to Boston to escape persecution in England. He was made pastor of a church at Mount Wollaston (now Braintree). His sympathy with the religious opinions of his sister-in-law, Anne Hutchinson, caused him many problems.

He defended Anne, and was tried by the General Court and pronounced guilty of sedition and contempt. In November, 1637, he was banished, and in 1638 he founded the seacoast plantation of Exeter, and became its pastor. The settlers signed the Exeter Compact patterned after the Mayflower Compact.

Another group from Massachusetts Bay, who were not dissenters, settled the town of Hampton.

These little towns had come into existence, each independent of the others. None of them had a stable government, and there was constant discord and turbulence. In 1639 the towns formed an agreement to unite. But Massachusetts claimed this territory, and the towns at length agreed to come under her jurisdiction. The union was formed in 1641, the people of the settlements were allowed to manage their town affairs, and each town sent a deputy to the General Court at Boston.

New Hampshire became a separate colony under a royal charter in 1679. From the start, New Hampshire was a coveted object for Massachusetts Bay Colony—which finally gained control of New Hampshire in 1698. The colony successfully broke away from Massachusetts in 1741, and went back to being a royal province—this time with a royal governor.