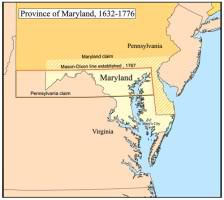 A Southern Colony
The Province of Maryland was an English colony in North America that was founded in 1632. It began as a proprietary colony of Lord Baltimore, who wanted to create a haven for English Catholics in the New World, and to demonstrate that Catholics and Protestants could live together harmoniously. Although Maryland was an early pioneer of religious tolerance in the British colonies, religious strife between Anglicans, Puritans, Catholics, and Quakers was common in the early years.

A Royal Charter
Charles I of England granted a charter for about twelve million acres to Cecil Calvert, 2nd Baron Baltimore on June 20, 1632. The charter had originally been granted to Calvert’s father, George Calvert, 1st Baron Baltimore, but he died before it could be executed, so it was granted to his son. Cecil had converted to Catholicism, which was a severe stigma for a nobleman in 17th century England. Catholics were considered enemies of the crown and traitors to their country.

The Lords Baltimore were the only Catholics in the history of the British Empire to have or obtain a proprietary colony—a type of settlement in which favorites of the British Crown were awarded huge tracts of land in the New World to supervise and develop. Most of the American Colonies were financed and settled by joint stock companies, in which investors owned shares.

The charter created a state ruled by Lord Baltimore, who owned all of the land granted in the charter, and had absolute authority over it. Settlers were required to swear allegiance to him rather than to the King of England. The charter also created an aristocracy—Lords of the Manor, as they were called—who bought 6,000 acres from Baltimore and held greater legal and social privileges than the common settlers.

Early settlement
The Calvert family recruited Catholic aristocrats and Protestant settlers for Maryland, luring them with generous land grants and a policy of religious toleration. Of the 200 initial settlers who traveled to Maryland, the majority were Protestant. In fact, Protestants remained in the majority throughout the history of colonial Maryland.

The ships Ark and the Dove landed at St. Clement’s Island on March 25, 1634. The new settlers were led by Lord Baltimore’s younger brother Leonard Calvert, whom Baltimore had delegated to serve as governor of the new colony. The 150 or so surviving immigrants purchased land from the local Native Americans.

One of the highlights of the early days of Maryland was the Act Concerning Religion, which guaranteed people in Maryland the freedom to practice whatever religion they wanted. This law attracted members of many different faiths, including Quakers, Presbyterians, Puritans, and Episcopalians

Maryland was a southern colony. Despite early competition with the colony of Virginia, the Province of Maryland developed along very similar lines as Virginia. Its early settlements clustered around the rivers and other waterways that empty into the Chesapeake Bay.

Native Americans
The Yaocomico were a Native American tribe who lived along the north bank of the Potomac River near its confluence with the Chesapeake Bay. The first settlers of the Maryland Colony purchased the land for their settlement at St. Mary’s City from the Yaocomico, who had a settlement there. European settler accounts claim that the Yaocomico were content to sell the land to the Maryland colonists because they were being threatened by tribes to the north.

The Maryland settlers continued to maintain good relations with the Yaocomico, going so far as to write language protecting them into treaties with other neighboring tribes. However, the Yaocomico disappeared by the 1670s or 1680s, possibly as a result of the European diseases that had begun wreaking havoc on native populations.

Maryland and the English Civil War
In 1654, after the Third English Civil War, Protestant Parliament forces assumed control of Maryland, and Governor William Stone went into exile in Virginia. Stone returned the following spring at the head of a Catholic force and marched on Annapolis. In what is known as the Battle of the Severn, on March 25, 1655, Stone was defeated, taken prisoner, and replaced him as Governor.

Puritan rebels briefly seized control of the Province by the Protestant King of England in 1688, but it was restored to the family when Charles Calvert, the 5th Baron Baltimore, swore publicly that he was a Protestant.

The Plantation Economy
Like its larger neighbor, the Colony of Virginia, Maryland developed into a plantation colony. In the 17th century, most Marylanders lived in poor conditions on small family farms. They raised a variety of fruits, vegetables, grains, and livestock, but the cash crop was tobacco, and it soon dominated the economy. Tobacco was sometimes used as money. The colonial legislature passed a law requiring tobacco planters to raise a certain amount of corn as well, in order to ensure that the colonists had enough to eat.

Slavery in Maryland
Maryland’s economy quickly became centered around the cultivation of tobacco for sale in Europe. The need for cheap labor led to the rapid expansion of indentured servitude and, later, forcible immigration and enslavement of Africans. Barbados was the first British possession to enact restrictive legislation governing slaves in 1644, and other colonial settlements quickly adopted similar rules modeled on it.

With the success of tobacco planting, African Slavery was legalized in Maryland in 1664, becoming the foundation of the Southern farming economy. In the 1690’s, slave prices dropped, and the owning of slaves became more common.

By 1755, about 40% of Maryland’s population was African. Maryland planters also made extensive use of indentured servants and convict labor. An extensive system of rivers facilitated the movement of produce from inland plantations to the Atlantic coast for export. Baltimore was the second-most important port in the eighteenth-century South, after Charleston, South Carolina.

King Charles II and his brother James disregarded the grant their father had made to Lord Baltimore, and conveyed to William Penn a large portion of his territory, which became Delaware. James, after he became king, was about to deprive Baltimore of his charter altogether when he was driven from the British throne.

In 1691, Maryland became a royal province, but Lord Baltimore was still permitted to receive revenues in from the colony. In 1692, the first royal governor arrived. But in 1716, the heir of Lord Baltimore was reestablished in his rights, and the proprietary form of government was restored;

Colonial Maryland was larger than the present-day state of Maryland. The Province lost some of its original territory to Pennsylvania in the 1760s, when the Mason-Dixon Line was drawn to resolve a boundary dispute between the two colonies. Maryland also ceded some territory to create the new District of Columbia after the American Revolution.

Maryland and the American Revolution
In the later colonial period, the southeastern part of the Province continued to grow tobacco, but as the revolution approached, northern and central Maryland increasingly became centers of wheat production. This helped drive the expansion of interior farming towns like Frederick and the major port city of Baltimore. The Province was an active participant in the events leading up to the American Revolution, and hosted its own tea party similar to that in Boston.

Maryland declared independence from Britain in 1776, and Samuel Chase, William Paca, Thomas Stone, and Charles Carroll signed the Declaration of Independence for the Colony. Maryland joined the other twelve American Colonies in establishing the United States and became the U.S. state of Maryland.