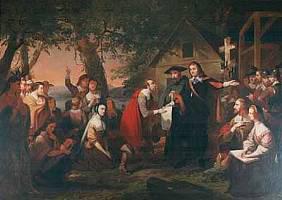 Verlinda Graves was born about 1618 in England. William Stone was born in England around 1603. He came from a well-known merchant family in London. William came to America in1628 with a group of Puritans who settled on the eastern shore of Chesapeake Bay in Virginia. Verlinda and William were married in the 1630s in Virginia, and they had seven children.

The Stones were successful in the Chesapeake, and respected by their neighbors. William worked as a merchant and planter. He was appointed justice of the peace, and then sheriff in Accomack County, and a burgess in the Virginia Assembly. The settlement thrived there, but eventually came into conflict with Virginia’s established Episcopal Church.

On April 2, 1649, at St. Mary’s City, then the capital of Maryland, freemen gathered for a meeting of the General Assembly in the home of Governor and Verlinda Stone. Acting as representatives of the people, they were to consider sixteen bills for possible approval as laws of the province. Among them was An Act Concerning Religion,

An Act Concerning Religion was one of the first statutes passed by the legislative body of an organized colonial government to guarantee religious freedom to all Christian denominations. It stated, in part:

…whatsoever person or persons shall from henceforth upon any occasion of offence otherwise in a reproachful manner or way declare call or denominate any person or persons whatsoever inhabiting, residing, trafficking, trading or commercing within this province or within any ports, harbors, creeks or havens to the same belonging, an Heretick, Schismatick, Idolator, Puritan, Independent Presbyterian, Antenomian, Barrowist, Roundhead, Separatist, Popish Priest, Jesuit, Jesuited Papist, Lutheran, Calvinist, Anabaptist, Brownist or any other name or term in a reproachful manner relating to matters of Religion shall for every such offence forfeit and lose the sum of ten shillings Sterling or the value thereof to be levied on the goods and chattels of every such offender and offenders…

In 1654, after the Third English Civil War, English Parliamentary forces assumed control of Maryland, and Stone went into exile in Virginia. He returned the following spring with 100 supporters and marched against the rebels in the Battle of Severn.

But he was greatly outnumbered, and after losing nearly half his men and being wounded in the shoulder, Stone surrendered and was taken prisoner. He was replaced as Governor by Josias Fendall, and took no further part in public affairs.

While William was in jail, Verlinda tried to help him by writing to Lord Baltimore, telling him exactly what had happened so he could protect her husband and the colony. William was released after being held for a month.

In 1660, the monarchy in England and the English government in Maryland were restored. Lord Baltimore granted the Stones as much land as they could ride around in a day, as a reward for William’s faithful service. The couple then concentrated on developing their plantation at Poynton Manor in what is now Charles County, Maryland.

William Stone died on December 21, 1860. In his will, written on December 3, 1659, he left his house and lands at St. Mary’s to his wife Verlinda, whom he stipulated was to remain at home in Nengemy during her widowhood.

Verlinda soon began to acquire more land for her family. In 1664, she was granted 300 acres in Charles County, which she called Verlinda. In 1666, she had surveyed 500 acres, called Acquinkeckes in what is now Prince George’s County, later patented by Mary Stone.

Verlinda Graves Stone lived in the Maryland Colony that she and her husband had fought to preserve until her death on July 13, 1675, in Charles County, Maryland. She left a personal estate appraised at 14,950 pounds of tobacco.