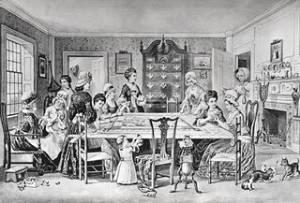 Because most colonial women married, the term good wife came into existence and a code of ethics developed that would govern female life in New England from 1650 to 1750. Good wives had legal rights in colonial America, and actually had more freedom than nineteenth-century women would have.

With This Ring
Marriage was considered the normal state for all adult residents in the colonies. Most men first married in their mid-twenties, and women at around age 20. Second marriages were not uncommon, and widows and widowers faced social and economic pressures to remarry. On average, most widows and widowers remarried within six months to a year.

Getting married was a major concern for young women in the American Colonies. If a young girl didn’t marry, it was probably because she was needed at home to care for a sick family member, but most women did eventually marry, as was expected by society.

Family
Colonial women’s lives were governed pregnancy, birth, and death. Women were pregnant or nursing during most of their reproductive years – New England women averaged seven births. They often died in childbirth, and many of their children died as infants or small children. But before a woman reached 25 years of age, she was expected to be married with at least one child.

Most girls in colonial America were taught household skills by their mothers. Men in colonial America believed that to educate women was a waste of time and energy, that girls didn’t have the capacity to learn. A girl was taught that marriage was the only worthwhile kind of life. At an early age, she assumed responsibility for the younger children in her family, and learned to run a household.

Wifely Duties
Women who earned their own living usually became seamstresses or kept boardinghouses, work they could do in the home. But some women worked in professions and jobs available mostly to men. There were women doctors, lawyers, preachers, teachers, and writers.

Some women worked at their husbands’ occupations – retailing, printmaking, shipbuilding, innkeeping, operating ferry boats, and managing prisons. Deputy husbands they were called. Some acted as nurses for their communities, and even some as teachers, but those who worked outside the home were the exceptions, not the rule.

In an agricultural society, the home was the center of production for the family’s needs, with both women and men performing labor that sustained the family. Men had primary responsibility for agricultural labor. Among women’s many responsibilities were spinning thread and weaving cloth, taking care of poultry, milking cows, producing butter, and tending the kitchen garden. Excess produce could be bartered or sold for other needed items.

In addition, women prepared and preserved food, made soap, made and washed clothing, bore and raised numerous children, and kept their large households clean and running. Women had to clean, butcher and prepare all game brought home to the family. These varied tasks filled the days of the overwhelming majority of colonial women. During harvest times, women joined men in the fields. The required specialized skills defined a good wife.

In non-farming families, women often worked alongside their spouses in their trades and in their shops, assisting in the production of goods and attending customers, while remaining responsible for child care and other household tasks.

Some women worked at their husbands’ occupations – retailing, printmaking, shipbuilding, innkeeping, operating ferry boats, and managing prisons. They acted as nurses for their communities, and even some as teachers. Women were rarely found in such esteemed professions as law and medicine, and those who worked outside the home were the exceptions, not the rule.

Since the family was the main unit of society, the wife’s position within the family, while subordinate to that of her husband, nevertheless meant that through her husband she could participate in the public life of the colony. When a man cast a vote in any sort of election, the vote was cast on behalf of his family. If the husband were indisposed at the time of the election, wives were generally allowed to cast the family vote in his place.

Since women were in short supply in the colonies, they tended to be more highly valued than in Europe. The wife was an essential component of the nuclear family, and without a strong and productive wife a family would struggle to survive. If a woman became a widow, suitors would appear with almost unseemly haste to bid for the services of the woman through marriage.

The lead in the family practice of religion was often taken by the wife. It was the mother who brought up the children to be good Christians, and the mother who often taught them to read so that they could study the Bible. Since both men and women were required to live according to God’s law, both boys and girls were taught to read the Bible.

The Town
In New England, colonists created a society based on the English town. In the center of the town was usually the commonhouse, which was used as a storehouse, a meetinghouse, and sometimes a church – until more structures could be built. The typical town began with two streets that bisected each other, with more streets added as needed.

Each family was given a lot adjacent to their home that varied from a quarter of an acre to twenty acres – depending on the size of the family – where they planted a garden. Nearby, outside the village, each family was assigned a strip of land for cultivating larger crops, and the women worked there, as well, raising food for their families.