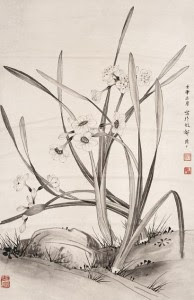 While researching for another post I came upon this web site from China that lists gods and goddesses and the flowers that they represent. In my attempt to confirm the names and the story behind each one I was only able to find one other listing. This listing had some duplication of goddess and flower but not all. Perhaps there is more than one list, or perhaps it depends where in China you live. It seems that these goddesses were real people, usually of high society and from what I can tell of ancient times. I was able to confirm a couple of the stories, which were quite lengthy, but not all. My lack of Chinese history and culture, and of course language, is obviously a detriment in this case. Modern China does not appear to follow these gods and goddesses. If someone knows differently I would love to hear from you.

The list numbers twelve flower gods and goddesses: five gods and seven goddesses, one for each month. I am copying directly from the web site, omitting some pictures and the male gods. The link to the site will follow at the end of the post. Enjoy.

Goddess of the Daffodil – Ehuang and Nu Ying

Ehuang and Nu Ying, daughters of Yao (the Emperor of China during 2358 – 2258 BC), were the wives of Shun (a 23rd-22nd century BC leader of ancient China). They got along with each other very well. When they heard the death of their husband, both of them throw themselves into the river. Legends said that they became the Goddess of Daffodil after their death. 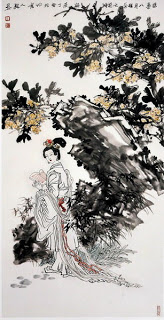 Xu Hui was a concubine of Emperor Taizong of Tang Dynasty. It was said that she was so clever that she was able to speak when she was five months old and when she was at the age of 8, she can even write poems.
Due to her talent, she was selected as one of the concubines for Emperor Taizong. However, such a genius died when she was 24 years old because she could not overcome the grief of the Emperor’s death.
She wrote many poems about Laurel Blossom when she was alive. Therefore, she was chosen as the Goddess of Laurel Blossom because of these poems and her intelligence. 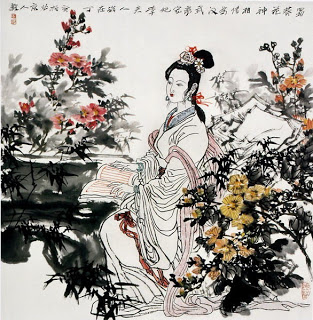 Lady Li, the favorite concubine of Emperor Wu of Han Dynasty, was a dazzling beauty.
There was a song as the witness of her extraordinary beauty.

In the North there is a beautiful woman,
Unique, Unequal in the world.
With one glance she conquers a city of men,
With another glance a country of men.
Don’t you know? A city and a country conquering
Beauty cannot be found again.

However, Lady Li’s physical condition was not so good and she died several years later after she was chosen as a concubine. Her life was just the same as the hollyhock blossom, short but flowery. Therefore, she was regarded as the Goddess of Hollyhock Blossom. 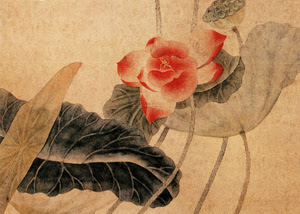 Xi Shi, a legendary beauty, was one of the Four Beauties in ancient China. Legends said that in summer she always went to pick lotus on Lake Jinghu. She was so beautiful that no one could rival her beauty. Therefore, she was crowned the Goddess of Lotus Blossom. 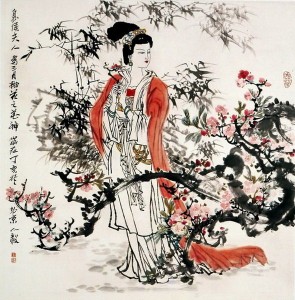 Lady Xi, renowned for her beauty, was the wife of the ruler for the State of Xi during the Spring and Autumn Period in ancient China. Salivated over her beauty, the King of Chu defeated the ruler of Xi and took lady Xi.
Lady Xi had children with him but never spoke a word to him any more. She killed herself later when she heard the death of her ex-husband. She died in March, when all the peach trees are in blossom. Moved by her firmness, people called her the goddess of peach blossom to show their respect. 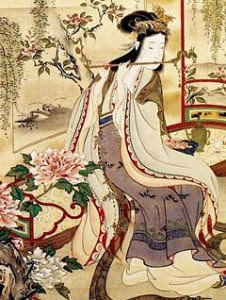 Yang Yuhuan, also called Yang Guifei by most Chinese (Guifei was the highest-ranking imperial concubine at her time), was one of the Four Beauties in ancient China.
During the Anshi Rebellion, she was forced to hang herself. Legend said that after the rebellion, the emperor wanted to locate Yang’s body and rebury her with honor. However, they could not find her body but apricot blossoms. People believed that she was ascended to the heaven and became the Goddess of Apricot Blossom.

Princess Shouyang, the daughter of Emperor Wu in the Nan Dynasty’s Song Era, was a plum blossom lover. On lunar January 7th, when she slept beneath a tree, a plum blossom fell on her forehead, leaving a floral imprint. With the imprint, she looked much more beautiful. Soon, all the ladies followed her to paste plum blossom shaped ornaments on their foreheads. It was then called Plum Blossom Makeup. Hence, Princess Shouyang was crowned Goddess of Plum Blossom and lunar January 7th was regarded as the birthday of plum blossoms.

Photos and text from :