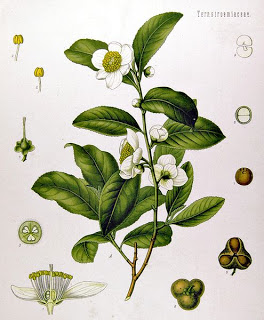 Tea estates or plantations have been known by another name for hundreds if not thousands of years as Tea Gardens. Imagine if you will rows of lush greenery rolling along the hillsides of mountains perhaps with a cool mist in the air due to the elevation. This lovely picture you have conjured is found in only certain countries in the world. The countries where the best tea is grown are in China, Japan, Taiwan (Formosa), and Sri Lanka (Ceylon). It has to do with their geography. Tea grows best in mountainous areas of elevations up to 6,000 feet, where there is a wet yet temperate climate, warm sunny days, and cool breezy nights. It is under these conditions that the Chinese tea plant Camellia sinensis flourishes.

Camellia sinensis is native to China, Japan, India and part of Russia. It has three main varieties: China, Assam and Indochine. There are also a number of hybrids. In the wild, a China tea plant may reach a height of nine feet and live approximately 100 years. It prefers a cool temperature and grows in altitudes over 6000 feet. In contrast, the Assam tea plant reaches 60 feet in height and lives 50 years. It requires more rainfall and grows in more southerly climes to 1000 feet in altitude.

Plants of Camellia sinensis are grown in nurseries before being planted out in the garden. Tea is planted in rows spaced 30 inches apart and the bushes are maintained at a height of four feet. Tea is planted on those rolling hillsides on terraces at an incline of 45 degrees where no machine can go, thereby requiring the harvesting of tea to be done by hand-the hands of women.

Tea cultivation and preparation has a very long history. No one knows with any certainty when the drink of tea was discovered and many legends abound with stories to tantalize. One such legend tells of the divine Chinese Emperor Shen Nung (2737-2697 BC), the ‘father of agriculture’, who by his experiments with hundreds of herbs discovered the drink of tea. Recent Chinese research discovered that tea was used as early as the twelfth century BC. , which was mentioned in a book written in 347 AD called the Treatise on the Kingdom of Huayang by Chang Ju. At that time tea leaves were boiled with water to make a drink. It was from the third century AD onwards that the plant underwent drying and processing. Since then very little has changed.

The Chinese introduced tea to Japan via Korea. Tea was introduced to Europe around 1610 by the Dutch and Portuguese who had dealings with the Japanese. By 1658 the British knew of tea and within one hundred years it became their most popular drink. In order to fill their appetite for tea the British attempted to trade for tea with China, which ended disastrously for China with the Opium Wars of the 1800s (a fascinating history with a residue that changed Chinese life and culture forever). With no trade agreement, the British East India Company began cultivating tea in Northern India in the Assam region and by 1870 in Sri Lanka (Ceylon).

Whether it is in the tea gardens of China, Japan, India or elsewhere, the methods of cultivation and harvesting have changed little over the centuries. Tea Gardens may be as large as 1000 acres and are called such “because the tea is grown here, harvested according to traditional methods, and bears its name.” In India the gardens or estates have names like Castleton, Jungpana, Tukver and Badamtam. Depending in which country the estate lies, most tea is picked from April to September. The best tea or premium quality teas are picked with the ‘first flush’ or growth of first spring leaves. The removal of these leaves without ruining the quality is a delicate matter and has been carried out by women for hundreds if not a thousand years. Women move between rows of tea bushes picking leaves in both hands, tossing them into large baskets on their backs. This first flush involves removing the downy terminal bud on the stem and the first two leaves below it. This is also referred to as ‘fine plucking’. During the rest of the season a ‘coarse plucking’ is performed which includes the bud and three to five of the leaves below it. These leaves are used in more common teas.

Picking or plucking is the most crucial operation in obtaining the finest quality of tea leaf. It has always been said that women are the best at this type of work due to their smaller hands and fine dexterous skills. Only in legend are there better pickers, those being monkeys. The legend goes that centuries ago a monkey saw his master picking tea leaves and imitated him. It climbed up the tea plants and collected the tea leaves for its master. This tea had so distinct a flavour that people thought it was the result of the tea being picked by a monkey instead of humans. They too started training their monkeys to pick tea for them. There are claims in China of monkeys that pick tea but I would not believe it if I were you. An experienced picker is able to quickly determine the tender leaves from the mature ones. She must leave the buds, harvest the tender leaves and pick and discard the mature leaves. These are split second decisions that only come with experience, for she must move on, fill her basket and then take it to an assembly and weighing area before beginning again. Pickers who are capable of picking quantities of the finest leaves are considered an asset to the company and would therefore receive better wages than those with lesser skills or those in training. Unskilled pickers may have an adverse effect on the quality of the tea as well as on the yield harvested.

The work is strenuous; making their way from a central camp or perhaps from a nearby village to begin work at light, moving between bushes with intertwining branches through steep terrain, carrying heavy full baskets. The women are usually poorly dressed, although it is not uncommon to see them in colourful sarees, their head covered with a hat or wrap against the sun. Often they wear plastic aprons to keep the branches from tearing or catching their clothes. When the day is done sometime around 4 PM, they return home to their children and husbands and continue their day like all working mothers after a full day’s work.

I am unable to tell you if these women are better off today than they were hundreds of years ago. Colonialization created tremendous problems that I will not get into here. It appears some estates provide childcare and education to the children of tea workers, and maternity wards with midwifes are on site for those who live on the estate. Trade Unions are also involved in some cases. However my impression is this is in the minority. The majority of female workers I believe are still underpaid, and left to look after themselves. Alcoholism is high for the men workers on the estate and therefore wife abuse follows. Needless to say, or is it, like Weeders (see my post on Women’s Work ) the female is once again performing the work no man wants to do. The argument that women’s hands are small and dexterous and therefore better suited to picking, or that they do not have any suitable skills does not hold water. Three million women are pickers worldwide. They provide the cheapest labour for the most important role in the tea industry. Despite this, the world of tea is changing. Fair Trade communities are increasing and have set their sights on the tea industry. In India’s Darjeeling area the Makaibari Tea Garden is one of the pioneers in fair trade. They offer an education program for children, scholarship funds to study horticulture, microcredit is available to their workers and an ‘organic union’ program which supports 200 organic farmers in 8 communities outside the estate.

The history of the Tea Garden and tea is enormous and much information has been omitted as I endeavor as always to focus on the women who play a part in this history. In this case, the line between history and current affairs is blurred when determining women’s role in the Tea Garden as her role has in fact changed little in hundreds of years.