Skip to content
History of American Women > Women and the gardren > Why did gardens evolve from East to West? 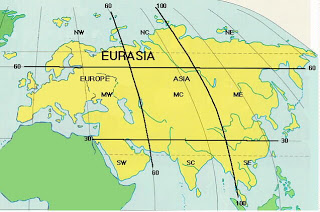 In all my garden research thus far, I have often wondered why there is so much information on gardens in Europe, the Middle East, China and Japan and seemingly less so or else very hard to find in other countries such as South America. These other civilizations survived for millennia and yet it is only with their colonization that there is the mention of gardens.  I realize that most likely all civilizations had gardens in some form or another, and if that is so, the information was never written or passed down or perhaps it was destroyed by its conquerors.
However, for me, the question is still pertinent.  Why did the evolution of the garden form move east to west, from Asia to Europe? Why not north-south?

I think part of the answer may lie in a book written by Jared Diamond calledGuns, Germs, and Steel.  The idea behind this book is that from the earliest civilizations Eurasia had advantages over other countries on Earth. Simply put, that area had a large variety of plant and animal species that were easy to domesticate. As well, climatic conditions and the geographic locations were more favorable; hurricanes, tornados, flooding and drought were minimal and the many rivers and mountains provided natural protective barriers.

Early civilizations were nomadic but as they developed towards an agrarian way of life they started to remain in one place to farm, raise animals and raise their families. They might settle in areas where berries, nuts, roots were naturally available and cultivate them in place. The Middle East in particular had the widest variety of plants and animals suitable for domestication. They grew two kinds of wheat, barley, flax for textiles, and kept sheep, cattle and goats for meat and their by-products such as dairy products, wool, leather and glue (from horns and bones).  They had animals such as horses and donkeys and camels that were used for transportation of their goods and therefore for trade.

When you look at north- south options it becomes clear that there were disadvantages that inhibited the success that was had in Eurasia. For example, if we look at Africa, desert areas are inhospitable with poor plant life, and a scarcity of water. Available animals such as the zebra and onagers (both part of the horse family) are not easy to domesticate, and the existence of lions, cheetahs and other deadly animals certainly made life interesting. In addition, useful plants that survived at one end of the continent usually could not survive the conditions if moved to another area, whether due to soil, weather or available sunlight.  Mr. Diamond also cites examples from the Americas and Australia which support this idea.

Seemingly, this advantage of living in the Eurasian zone led to advances in all areas compared with other civilizations. With better food options there is increased food production; a larger food base allows for larger societies; large societies support the division of labour, permit more ‘free’ time, and allow specialist areas to evolve such as gardens and gardeners. The East – West orientation of Eurasia allowed for an easy exchange of ideas. Trade routes over land were possible since the animals used were accustomed to the similar climates and change of seasons. The discovery and the exchange of plant materials fared the same regarding seasonal changes and climate, and a plant brought over from China or Turkey could grow just as successfully in its new home country.

In my own view, this East- West continuum eventually includes North America.  Evidence is the ease in which plants from the east grow in our homes and gardens, and the same is true of North American plants growing in Europe and the Far East (I do not know if the Middle East grows plants from North America). We also share many siblings in common such as the maple, cherry and dogwood, and yet without similar climate growing them here would not be possible.

I have also found it odd that this question of East-West garden evolution does not seem to be raised by other garden writers. It is always referred to as a fact and left at that. Perhaps it is simply that I have not read books that do discuss this, and so I call out to you to tell me wrong and refer me to books where I can find more of the information that I seek.