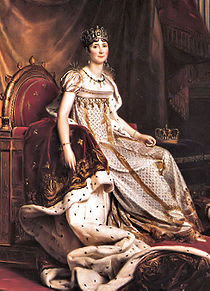 Josephine Bonaparte  (1763-1814) was born Marie Josephe Rose Tascher de La Pagerie. She was born to a wealthy white family that owned a sugar plantation in Martinique.  After hurricanes destroyed their estate the family looked to improve their finances and Josephine was married in 1779 to Alexandre de Beauharnais, himself from a wealthy aristocratic family. They had two children, a son  Eugene and a daughter Hortense.  In 1794 during the Reign of Terror both Alexandre and Josephine were arrested as aristocratic suspects. Alexandre was sentenced to death in July while Josephine remained imprisoned until her release 5 days later.
Then in 1796 she met Napoleon Bonaparte who would marry her on March 9, 1796. Their life together was difficult at times due to infidelities on both sides and differences of opinion regarding money. They never had any children together and this would be the reason for their divorce in 1809.
In 1799, while Napoleon was away fighting the Egyptian Campaign, Josephine bought Malmaison.  Malmaison was a small chateau in the country just outside of Paris. She paid 300,000 francs for the house on an allowance of 4,000 francs. The house was in very poor shape and needed renovations. Upon his return Napoleon was angry at Josephine for buying the house but in a short time they restored the house to a state of glory. From 1800-1802 Malmaison was the headquarters of the French government.

The estate of Malmaison comprised of 650 acres. Three hundred acres were landscaped by Berthault in the English Landscape fashion with rolling hills and dotted with pockets of woods. Pavilions were built  as well as grottoes. Vineyards and wheat fields filled other areas. Napoleon later added the woods of Butard increasing the estate to 4500 acres.

Josephine  was interested in the plants and grew and collected anything that was considered rare. She brought in flora and fauna from around the world such as “kangaroos, emus, black swans, zebras, sheep, gazelles, ostriches, chamois, a seal, antelopes and llamas to name a few”. In 1800 she built a heated orangery to house some 300 pineapple plants and five years later she had a greenhouse built for all her exotic plants. It is said she cultivated 200 plants new to France. Josephine wrote:

Her favorite plant was the rose.  Between 1804 and 1814 Empress Josephine built her rose collection. It was to become the greatest and largest rose collection in the world, unsurpassed until the creation of Sangerhausen in Germany and L’Hay outside Paris, one century later. The collection was made up of about 250 species and varieties;  ”Josephine grew 167 Gallica roses, 27 Centifolias, 22 Chinas, 9 Damasks, 8 Albas, 4 Spinosissimas, 3 luteas, R. moschata, R. carolina, and R. setigera”. Being Empress had its benefits and rewards during time of war. The French Navy was enlisted to confiscate any plants or rose seeds from ships at sea and her large purchases from the British nursery Kennedy and Lee were permitted safe passage through the naval blockade.

Josephine’s rose garden was important for other reasons besides being the largest collection. The acquisition of Slater’s Crimson China, Parson’s Pink and Hume’s Blush Tea Scented China (through Kennedy and Lee) was of great importance for France, for they were among the first new everblooming roses to come from China which would later produce everblooming rose cultivars. Her collection encouraged French hybridizers to work on new varieties. Josephine’s own head horticulturist Andre du Pont grew 200 new varieties, many of them new introductions. In addition, by 1830 some 2500 different rose varieties would be available to Parisian rose lovers, all influenced by Josephine’s zeal for rose collecting. It was also the first time that anyone had had thought to create a garden with only one type of plant. Pierre-Joseph Redoute was commissioned to illustrate each rose. Redoute, a botanist as well as artist, made 117 coloured drawings of roses from the garden of Malmaison which culminated in the book Les Roses, completed after the death of Josephine.

After her death Malmaison was left to neglect. It seems that the roses were dug up after Josephine’s death- almost certainly stolen. Perhaps they were removed to the gardens of her gardeners or rivals – it is not known. Malmaison was eventually purchased and later sold to the French government who now exhibit it as a tourist destination. The rose garden however is still neglected according to some tourist reviews I have read which is a real shame. Regardless Josephine’s legacy remains, perhaps not the garden itself but the legacy of the growers and hybridizers who were influenced by her love of the rose.