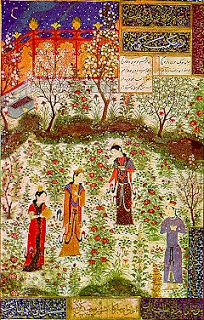 Now we turn our thoughts to ancient Iran or Persia. The history of Persia is one of a country invaded many times over. In the 7th century the Arabs invaded and conquered the Persian people. The Moguls with leader Genghiz Khan invaded in the 13th century and again in the 16th century by Tamerlane. Each conqueror brought something to the existing culture and yet the traditions and culture of Persian garden design remained and was absorbed and integrated into the cultures of each occupying force.

As Egypt was a leading influence on garden style and design in the Mediterranean region, (in particular the Romans who brought it to the lands they vanquished) Persian gardens became the ideal from Spain to India. The earliest gardens were most probably influenced by the  Egyptians, with walled enclosed gardens, primarily rectangular in shape, and shallow crossing water channels. Within this formal arrangement would be fragrant flowers such as rose, narcissus, tulip, lilac, jasmine and orange tree, some of which were brought in from China in exchange for grapes and horses as early as the second century. However the greatest influences on Persian gardens were climate and  geography, religion and the love of beauty; their culture.

The majority of the country is high above sea level and is arid desert or steppe. High temperatures with searing sun in the summer, cold temperatures and blizzards in the winter, strong winds, fierce sandstorms and a lack of fresh water created a need for protected areas with ample shade. Enclosed gardens protected against wind, trees for shade and wind barriers, and where possible water was channeled in. Within this difficult terrain are green valleys and lush forests. Recreating this paradise in the more inhospitable areas became a goal.

On the small scale the garden was attached to the house with perhaps a portico as the link. On a grander scale, beyond the palace there were pavilions connecting gardens along with channels of water. Outside of the walls were parks. Parks were just as important, if not more so, than gardens. Persians revered trees and had cults dedicated to trees (as did the Egyptians). Part of every young boys education was to learn to plant and care for trees. Tree planting was a sacred occupation. Parks were planted formally, in rows. The initial intention of the park was a hunting ground but also served as an area for feasts and audiences for great princes to take place.

The gardens were designed in the classic arrangement of the chahar bagh. The chahar bagh, or four gardens, has a fountain in the centre where two channels of water intersect. Channels of water may also follow the perimeter of the garden, along with paths of stone. It is thought that the chahar bagh may represent the four quadrants of the Persian empire. This basic form became the ideal for all Islamic gardens.

To the Persians gardens were like heaven, filled with birdsong, fruit to eat, fragrant flowers, water and cool shade. The Persian word for garden is pairi-daeza; pairi (all around) and daeza or diz (shape) or wall enclosed. They followed the teachings of Zoroaster who spoke of a heaven with paths of gold and pavilions that glittered like diamonds, filled with fruit and fragrant flowers. To the Arabs that arrived later, the gardens looked like the gardens promised in the Koran, with the chahar bagh symbolizing the Four Rivers of Paradise that flowed to the north, east, south and west.

“This is the Paradise which the righteous have been promised. There shall flow in it rivers of unpolluted water, and rivers  of milk forever fresh; rivers of delectable wine and rivers of clearest honey. They shall eat therein of every fruit and receive forgiveness from their lord.”

Almost all of the original gardens are gone, in ruins or built upon by later civilizations. It is by the sheer force of the Persian love of beauty that we can know today something of their gardens. It is from their poetry, paintings or miniatures and carpets they we weave together this information. Miniatures give us some examples of how the garden may have looked, what flowers and trees they grew. We know that they built platforms into trees to enjoy the flowering spring time. On the platforms they laid pillows and carpets for comfort. Carpets were also placed on the grass and under trees. The designs on carpets were filled with gardens. Explosions of flowers, birds and other animals filled the interior. Borders of colour or borders with swimming fish may have represented the channels of water typical in gardens. Bare tree branches may symbolize the four rivers of paradise and squares of colour may be the garden beds.

One of the earliest extant accounts of a Persian carpet belonged to the Sassanid prince Chosroes 1 (531-579). The carpet was woven of the finest materials with coloured stones and threads of gold and silver. It was 60 yards square. It “represented a pleasure- garden,  with streams and paths, trees and beautiful spring flowers.” Unfortunately when the Arabs found the carpet they had it cut up and sold, but not before recording it by their historians.

The Persian garden became the ideal for all Islamic gardens and were taken eastwards to the Taj Mahal in India and westwards to the Alhambra in Spain where wonderful examples live on.