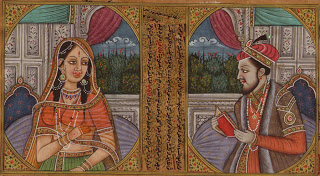 “ …she erects very expensive buildings in all directions – sarais, or halting-places for travellers and merchants, and pleasure gardens and palaces such as no one has ever made before.”

The Mughal period in India was one where culture and the arts were of great importance to the royal family and the ruling classes below them. Nur Jahan was fortunate indeed to have lived in this time and to have been born to a wealthy and powerful family. She was skilled in two languages, was considered an accomplished poet, designed and created clothing and jewellery, an art lover and collector, and she is famously known for her prowess as a huntress, her horsemanship and long black hair. It is quite understandable then of her great interest in architecture and garden making. Nur Jahan was quite fortunate indeed that her husband and emperor Jahanjir held many of the same interests. Together and apart they built palaces, mausoleums,and gardens.
The Mughal garden style was taken from the ancient Persian garden. A walled garden was built with two water channels that intersected dividing the garden into four quadrants. This pattern is called the chahar baghor char bagh.( see Magic Carpet Ride)  Early Mughal gardens were set outside the palace or citadel walls, and in the case of the city of Agra, gardens lined the banks of the river Jamna. Gardens inside the palace were paved surfaces of stone with perhaps an ornamental pool and water channel. Unfortunately the earliest gardens no longer exist nor do any records with description.

Nur Jahan is known to have rebuilt the gardens of the RamBagh (Garden of Repose) situated on the Yamuna River in Agra. She was given the garden by Jahanjir who had inherited it from his garden -loving ancestor Babur.The design of the Ram Bagh differs from earlier gardens in that the main building is located on terraces that line the riverbank rather than being centered in the garden in the classical char bagh style. The char bagh is a garden divided into four quadrants by two channels of water that intersect in the middle forming a pool or a fountain. Water channels also follow the perimeter of the garden and link up with the two main channels. At the Ram Bagh the four gardens were set at a depth lower than the water channels for a few of reasons.The main reason was ease of watering the plants; water could be allowed to overflow into the gardens. Mughal gardens were often arranged in terraces with the main building or palace closest to the top. This is intentional, as the gardens were meant to be looked down upon, like a living carpet. And of course the third reason is that the garden was a place of refuge; a cool, shady green place to hide from the heat.

Nur Jahan most likely maintained the beautiful gardens of the Ram Bagh. In its time it was known for its fruit trees of mangoes, tamarind and pineapple and vines of grapes and melons. Today, after centuries of war and a desire for more modern gardens, the Ram Bagh’s original character has been lost. ‘Gone are the glowing parterres,carpets of colour – “the roses and  narcissus planted regularly in beds corresponding to one another” – such as were spread to delight the eyes of Babar or Nur-Mahal. Winding drives and meaningless pathsnow replace the charming old formality, while the baradis on the riverside terrace are disfigured and modernised. There remain only the terraces,fountains, and narrow watercourses, with their tiny, carved water-chutes, and the old well from which the garden was supplied with water from the Jumna.’

A minor garden built by Nur Jahan is the Moti Bagh (or MotiMahal) that also lies on the eastern bank of the Yamuna River. It was typical architecturally for the time with parterres filled with fruit trees and flowers.

Her most famous gardens in Agra, again on the Yamuna River, were the tombs of I’timaduddaula for her deceased father and that for her husband Jahanjir at Shadara, both which still exist. It is not known how much direct influence Nur Jahan had in the construction of Jahanjir’s tomb as she was exiled almost immediately on his death. However, the design of the mausoleum was taken from the I’timaduddaula.  The I’timaduddaula garden was walled with false gateways on three sides. From the main gatehouse is a straight drive with orchards planted on either side. The garden was in the typical char bagh style with the mausoleum on a raised platform in the centre of the four water channels.  Four tanks(large pools that acted as reservoirs) “were on each side of the central platform, each of which contains a small fountain, and there are angular channels that carry water to all four corners of the small enclosure.” At onetime its avenues were lined with cypress trees and the walks spilling over with scented roses. The four parterres would have been filled with brilliant flowers considered worthy of worship. Each one of the four parterres would be represented by a single flower in great abundance like the tulip, violet or rose. Other flowers they may have used were poppies, lilies, anemones and red cyclamen. Imagine standing from higher ground looking down on such a colourful display.

The couple spent thirteen summers in their beloved Kashmir. They travelled on elephant over the Himalayas, along with their large entourage. Here the land was not flat as in Agra but mountainous, with verdant valleys dotted with lakes. In Kashmir they looked to use the natural beauty of the place and took advantage of its views by creating terraced gardens. Lakes,waterfalls and streams were made part of the design.

“juts out into the lake with its burden of terraced walls and slender poplar trees, like some great high-decked galleon floating on the clear calm water.”

The most famous and secluded garden on Dal Lake is that of Shalamar Bagh which was originally built by Pravarsena ll who reigned in Kashmir from A.D. 79 to 139 (or so the legend claims). I will desist with the glowing flowery quotes here to point out what is of most interest to us. Shalamaris divided into three areas, an outer public garden, the emperor’s garden and the zenana garden for the women of the harem. The zenana garden was the climax of Shalamar with many fountains and watery arcades that were lit up at night.Here the hand of Nur Jahan is seen. Each of these gardens was its own terrace, from lowest level to the topmost level. Nur Jahan was allowing the public into a usually very private place for royalty only. The royal gardens were no longer for pleasure alone; the new Mughal garden had imperial duties as well and the intention was to make a statement to all about the emperor’s power and place in the Mughal world. The outer public garden allowed Jahanjir to receive the public and other high officials even at times when he was at leisure.  The zenana gardens at Shalamar stood as a symbol of women’s transformation. Here, women were not required to wear the veil and no longer represented a morality. This was Nur Jahan’s doing.

Another garden and our last is the royal garden of Achabalin Kashmir. This garden predates the arrival of the Mughals and was an orchard garden for the Sultans of Kashmir in the fifteenth century. The site of Achabal was built around a powerful mountain spring at the base of a forested mountain. Nur Jahan laid out new gardens in 1620 which consisted of four ascending terraces in the char bagh manner. The main feature is the spring whose water is collected in various canals with platforms and pavilions built over top. Pools with fountains are prominent in the design found on the terraces. The garden was laid out with many walks and shaded by fruit trees of apple, pear, plum,apricot and cherry. Fish ponds existed during this time too. Today the gardens of Achabal are much reduced in size and have undergone some renovation due to decay. However its location and site is still unparalleled in beauty.

Nur Jahan was a rare woman of her time. She was immensely talented and had a mind that could rule an empire. Along with Jahanjir they celebrated the arts and were deeply involved in creating  beauty. Nur Jahan was involved in the creation of eleven gardens to my knowledge. These were not small gardens but royal gardens built on terraces, surrounded by running water, a home for palaces, pavillions for shade and rest, orchards of fruiting trees and brightly coloured flowers to thrill the eye.