The Ancient Egyptian garden goes back to 2800 BC. It was formal in structure. Attached to the house was the portico, a covered porch that could be supported by pillars. The portico connected the house to the outdoors and the garden. In the center of the garden was a pool, either rectangular, oblong or T-shaped. Around the pool could be trees of fig, palm, sycamore, pomegranate, nut trees and jujube. Sometimes arbours of grapevines circled the outer edges of the garden. Flowers would be grown in beds or in pots lining walkways to the house. Flower beds tended to be in solid colours and contained cornflowers, poppies, papyrus, daisies, mandrakes, roses, irises, myrtle, jasmine, mignonettes, convolvulus, celosia, narcissus, ivy, lychnis, sweet marjoram, henna, bay laurel and small yellow chrysanthemums. Typically the garden would be enclosed by walls.

Not everyone enjoyed a garden. It seems gardens were for the officials and for the temples. The house or temple was usually built on a hill not too far from the Nile in order to be able to provide irrigation. Temples were places of divinity and different temples prayed to different gods, each symbolized by a sacred tree. Temple gardens could be quite large and in fact some would be considered arboretums by today’s standards. Flowers were also grown and used extensively in temples as offerings to the gods in the form of wreaths and  oils for perfume.

Egyptian society was hierarchical and divided into many social classes. Those in higher classes always enjoyed more benefits than those below them, however all people within a class were treated equally.  Egyptian women had more rights and freedoms than the Greeks and Romans. Women could work along side their spouses in business and certain professions were open to them such as, dancing, music, mourning, midwifery and the priesthood. Women were equal in the eyes of the law and could own, manage and receive property, including slaves who were considered property. Marriage for Egyptian women was usually arranged, with a contract, that could be broken with a divorce. Most of the laborers were slaves (the lowest class) and the majority of slaves were women. They could be found doing many types of work, farming and household work included.

The wife was head mistress of the house and she made all decisions in regards to it. She had influence over the plantings in the garden and ensured the necessary plants were grown for medicinal purposes as well as, growing flowers to decorate and perfume the house. In small homes the wife would work in the garden with perhaps a female slave. Gardeners in large estates were men, women and children. They kept the gardens cultivated and made garlands and wreaths to be used in festivals and for worship. For them as it is for us, the garden was a place to find quiet and privacy, shade from the heat of the day, a place for entertaining guests and a place for the family to be together. 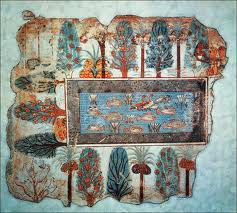 * Roof gardens were already in existence at this time, as was topiary.
* Imported flowers (!) included the rose, anemone, poppy, thistle, reed, chrysanthemum and cornflower.