Skip to content
History of American Women > Women and the gardren > The Garden in a Nunnery, Part 1 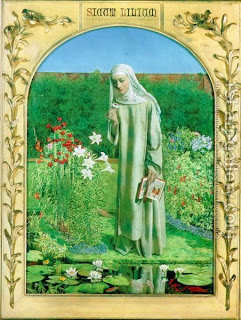 “Come, I’ll dispose of thee among a sisterhood of holy nuns”

Monasteries have been around in many forms. In the East men attracted by the hermits life preferred living in isolated cells (room) to the cloistered community. Early monks depended on the alms collected to survive. If these were insufficient then there would have been a need for a garden. Western monasteries appear to have always been cloistered as a community. Gardens were always part of the plan.
Some of the earliest gardens were found in monasteries all throughout Europe. The monastic gardens served many purposes.  Food for the table, flowers for the altar and herbs for the sick were all grown within the walled grounds of the monastery. Most importantly, from an historic view, was that these gardens along with the techniques of gardening were preserved for the future.  The medieval period ranged from approximately 500 -1500 AD. It was a time of war and a time of crusades. Without the monastic gardens the art of gardening would certainly have been lost to ruin and neglect.
Most monastic gardens were laid out following the lines of the Roman villa. It formed an atrium and peristyle, surrounded by a colonnade –  this enclosed area was renamed the cloister. Cloisters were sanctuaries where the good and wicked could flee and be safe. In time the simple courtyards grew into extensive buildings and enclosures. Then the outdoors would be divided into four areas; the physic garden, a cloister garth (garden), a vegetable garden and an orchard. The cloister was divided into four parts by paths that intersected in the middle and marked by a fountain, well, or sometimes a tree. The number four had a number of meanings here as it does in Islamic gardens: the four rivers of paradise, the four cardinal virtues, the four evangelists.

The medieval period is when monasteries and nunneries were at their highest numbers in the west. Nunneries differed from monasteries in that the women or young girls who joined them were always from noble and wealthy families. The poor needed to keep their girls home to help with the family and house. Nuns also, were never permitted to leave the convent. They were expected to lead a life that strictly followed their vows of chastity, obedience and poverty.
Areas of work attached to the garden include the work of the cellaress (food), sacrist  (for the church flowers and candles), and the infirmaress (hospital). Convent food primarily came from their own resources; the vegetable/kitchen garden, the orchard and a farm. The kitchen garden, orchard and farm was managed by the cellaress and provided most of the bread, meat, vegetables and beer or wine, as well as some dairy produce. Typical crops of the kitchen garden were turnips, parsnips, onions, leeks, various legumes, mint, basil, wormwood, borage, mugwort, nettle and melons.  Fruit trees were grown in the orchard such as pears, apples and cherries, figs and grapes for wine. Whatever else that was lacking was purchased.
The herbularis or physic garden grew, among others, sage, rue, aloe, rosemary, southernwood, poppy, mint and pennyroyal, parsley, gladioli and marigolds. The infermaress took care of the ailing nuns and was able to make salves, potions, ointments, and pills. Women were not allowed to be physicians and so a male doctor was always brought in when a nun needed greater care.
The sacrist was in charge of the care of the chapel and flowers were frequently used as offerings and adornment. Flowers grown for the church included roses, lilies, asters, primroses, violets, carnations, marigolds and many others.
The life of the nun is extremely interesting. I would love to keep writing about their lifestyle but instead I will tell you about three nuns from different time periods in part 2 of The Garden in a Nunnery.

Get thee to a nunn’ry, why woulds’t thou be a breeder of sinners?