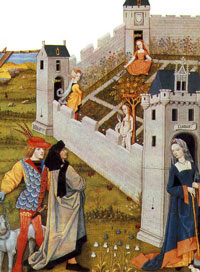 I am continuing the theme of the Virgin Mary and the garden because I feel that the idea of the hortus conclusus should not be left out.
The hortus conclusus is a particular type of enclosed garden in the sense that it is tied symbolically to the Virgin Mary. While the hortus conclusus takes the form of a garden in Medieval and Renaissance art it is actually a representation of the Virgin Mary. And yet many of its actual physical attributes are taken from even earlier centuries of garden making. When we look far back to the earliest Oriental gardens of Persia, Egypt, Babylon and Mesopotamia we see walled gardens filled with fruit trees, flowers, water and places to sit. Medieval Europe took these traditions and transformed them to their ways and will.
After the fall of Rome, medieval Europe (500-1500 AD) was a place of transition. It was a time when kings were fighting wars against other rival kings and a time of crusades. Castles and monasteries were built high on hills or mountains and walls were erected to protect against invaders. Erecting barriers became part of the  psyche with the result that virtually all gardens were protected not only against invading armies but also against thieves and marauding livestock.  Monasteries also followed this layout and it is known as the cloister (from Latin  claustrum, “enclosure”). With the number of monasteries at their highest during the medieval period it is significant that the origin of the cult of the virgin and the increase of devotion to Mary may have spurred the revival of the idea of the hortus conclusus.

These now famous lines are from the Song of Solomon. Written by King Solomon as a nuptial song for his bride, and quite the sexy one at that, it is a dialogue between bride and bridegroom using the garden as metaphor. In Europe, during the medieval times the main religion was Christianity and they believed the Song of Solomon to be an allegory of the union between the church and Christ. Other religions have found their own interpretations or allegories in the poem. Often, though, the allegory is, the lover is God, the beloved is the Virgin Mary. 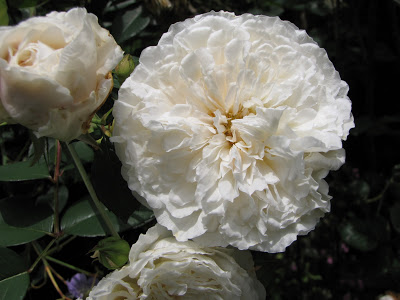 Purity, or the pure woman, is what it seems to distill down to. In paintings of the Virgin Mary it is she that symbolizes purity surrounded by her chastity belt or the wall. The garden is of no actual import other than perhaps from a religious view as a paradise, and one she can not leave.
For the medieval woman the enclosed garden was designed to be her chastity belt. Purity of the bloodlines was a great concern for the medieval husband. When kings and lords left home to go to battle they wanted to feel assured that upon their return their queen or wife remained inaccessible to rapists or even suitors, and shut their women up as tightly as they could. In this way, she could enjoy the outdoors and all that nature offers in the confines of the garden and remain pure in the eyes of her father or husband. As for the suitors, that is another story.