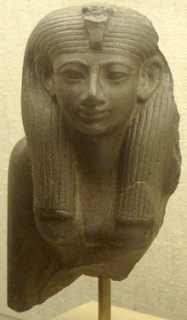 A couple of time ago I wrote a post on the ancient Egyptian garden, which you can find here. Since writing it I have found out a few more things about gardening at that time but more specifically, the discovery that Queen Hatshepsut had made a name for herself in early plant exploration. So this post is about Queen Hatshepsut but is also an update on ancient Egyptian gardens.

Hatshepsut, the fifth ruler of the 18th Dynasty, daughter of Thuthmosis I and Queen Ahmose, married her brother Thuthmosis II. They had one daughter, Neferure. With the death of her husband,a son by a secondary wife became king and Hatshepsut his regent. According to Egyptian ways a woman cannot become a pharaoh; however a man cannot rule alone and needs a woman as his counterpart. Hatshepsut was a motivated woman with a desire to rule and soon enough she found a way. She created the story of her divine birth from the god Amun and to support her claim she dressed herself in traditional male garments of the pharaoh along with a king’s iconography. Her name means “united with Amun in front of the nobles”. Hatshepsut’s reign lasted twenty years and was peaceful.  It was also prosperous as she developed Egyptian resources in mining, agriculture and building.
One of her greatest accomplishments was to re-establish trading with a society called the Punt. No one today knows exactly where this people lived but it is thought that they were in the region in southern Africa near Somalia. The expedition was formed in order to bring back trees of frankincense and myrrh. The ancient Egyptians followed many deities and theses deities were honoured with the incense created from the resin of these trees. Large quantities of incense were burnt each year as aromatics were used prominently in their religion, medicine and magic. Thus this trade relationship was important to Egypt.
This first voyage to the land of Punt was recorded and preserved at the temple of Deir el-Bahari in Thebes, c.1500 BC. The temple was erected by Hatshepsut in honour of her god Amun and as a memorial to herself.On its limestone walls are the pictorials of the plant expedition to Punt. It shows the gathering of the fragrant gum of the frankincense tree being carried in baskets slung on poles, as well as cut ebony logs, living plants and trees,and a variety of animals.

The temple and its gardens were built on high ground primarily to escape the flooding waters of the Nile but its intention was to create an impression of greatness and power. Three terraces, built one above the other, are set against the mountainside, lined with pillared corridors and the shrine at the topmost terrace. The queen brought back thirty two in cense trees and these were planted in the gardens on each terrace. The trees had been dug up with plenty of earth in the spring before leaf bud and were placed in pots. Then in Egypt they were unpacked and planted in walled pits. Other trees such as sycomore figs and tamarisks were also planted at this site in rows:

“Excavations in front of this gate have exposed the square walled pits, which were filled with earth taken from the Nile with a view to giving the best possible nourishmentto the trees. They were watered by an arrangement of pipes from the sides. In these holes there have been discovered traces of Persea trunks.”

(evergreen trees belonging to the laurel family, Lauraceae.) Today, no other plant life exists apart from the remain ingmummified tree roots at the temple of Deir el-Bahari.

The Egyptians were a society that could be called a Cult of the Dead exemplified by their temples and pyramidal resting places. The resins of frankincense and myrrh collected from the land of Punt were used in religious ceremonies and in the mummification process. Life on earth was lived with the intent to live a better after life. Their gardens were part of this process and were made to imitate what they believed gardens in paradise would look like – although better. What we have left today of these gardens are found on tomb paintings, papyri and some archeological evidence. We do know that a number of plants were used symbolically in gardens to represent their gods. The most common of these plants were the date palm, doum palm, tamarisk, papyrus, grape vine, blue water lily and lotus. The lotus and blue water lily were the most valued water plants. The blue water lily is known to contain opiate- like alkaloids and were used frequently in religious ceremony and as floral motif in buildings.

Hatshepsut’s expedition to the land of Punt provided a trade relationship that later pharaohs would also enjoy. It is known that plant material from this land was used at other temples and palaces.