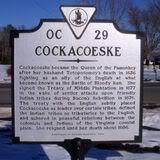 Queen of the Pamunkey

Cockacoeske was a Native American woman born on the land lying between the Pamunkey River and Mattaponi River in Virginia. Her father was Opechancanough, the Great Weroance of the Pamunkey Tribe. Each tribe was led by its own Weroance. (Weroance is an Algonquian word meaning tribal chief or king, notably among the Powhatan Confederacy of the Virginia coast and Chesapeake Bay region.)

Cockacoeske became the Queen of the Pamunkey after her husband Totopotomoy’s death in 1656 fighting as an ally of the English at what became known as the Battle of Bloody Run.

At the time of the English settlement at Jamestown in 1607, Opechancanough was a much-feared warrior and a charismatic leader of the Powhatans. As Chief Powhatan’s younger brother (or possibly half-brother), he headed a tribe situated along the Pamunkey River near the present-day Town of West Point.

Known to be strongly opposed to the European settlers, he captured Captain John Smith of Jamestown and brought him before Chief Powhatan at Werowocomoco, where the famous incident with Powhatan’s young daughter Pocahontas intervening on Smith’s behalf is thought to have occurred.

In 1644, forces under Virginia Governor William Berkeley captured Opechancanough, thought to then have been between 90 and 100 years old. While he was a prisoner, Opechancanough was shot in the back by a guard. After Opechancanough’s death, the once mighty tribe disintegrated, and the English grew stronger in the Virginia Colony. He was succeeded as Weroance by Nectowance, and then by Totopotomoy.

Cockacoeske married Totopotomoy, who became a staunch ally of the English and often sided with them in conflicts. He was killed in 1656 while fighting as an English ally fighting against other Native Americans, at what became known as the Battle of Bloody Run.

After Totopotomoy’s death, Cockacoeske became Great Weroance of the tribe, and was called Queen of Pamunkey by the English colonists. Despite their alliance with the English settlers, the Pamunkey were attacked during Bacon’s Rebellion in 1676, and Cockacoeske was said to have barely escaped with her life.

She is best known for having signed the Articles of Peace, also called the Treaty of Middle Plantation in 1677. That treaty placed Cockacoeske as leader over a number of Indian nations, including the Rappahannock and the Chickahominy, who had not previously been subject to the Powhatan chiefdom.

It also defined the Indian tribes as tributaries to the English and ushered in peaceful relations between the colonists and Indians of the Virginia coastal plain. Subsequent versions of the Articles of Peace were written over the next few years, signed by additional Indian nations.

Over the thirty year span of her reign, Cockacoeske worked within the English system to recapture the former power of Opechancanough and maintain a peaceful unity among the several tribes under her control. By maintaining a diplomatic relationship with the English, she made it possible for her people to survive.

In 1685, the representative of New Kent in the House of Burgesses was a man named John West, who was the son of governor John West and nephew of Thomas West, baron De La Ware. It was written in later records that he lived with or kept company with Cockacoeske, and that they had several sons together.

Cockacoeske reigned as Queen of the Pamunkey Tribe until her death, about 1686, but her attempt to reestablish the tribe’s power failed, due to the lack of cooperation of the subjugated tribes.