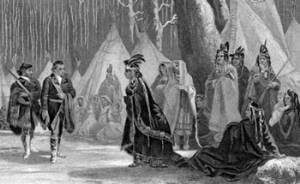 Queen Aliquippa was a leader of the Seneca tribe of Native Americans during the early part of the 18th century. Little is known about her early life. Her date of birth has been estimated anywhere from the early 1670s to the early 1700s, but historians have indicated that she was born in the 1680s, probably in upstate New York.

The story of Queen Aliquippa begins long before white trappers had ventured into western Pennsylvania, so no accurate record of her early life exists. The information that can be found is extremely fragmented, so sorting through the fact and fiction of her life will be left to the reader.

The most commonly repeated story of Aliquippa’s life begins with the visit she made with her husband and infant son to Wilmington, Delaware, in the autumn of 1701. The family had made the trip from their home in the Conestoga Valley in central Pennsylvania to bid farewell to William Penn as he prepared to sail home to England.

Colonial agents and military officers felt compelled to retain her good graces, and she felt affronted if their gifts did not properly reflect her status. This power probably derived from her role in the founding of the Indian community known as Aliquippa’s Town, which was first identified in a 1731 report by Pennsylvania fur traders on the Indians living in the Allegheny Valley.

At that time, Aliquippa’s Town had only four families, and it was the only Seneca village among the surrounding Delaware and Shawnee communities. However, the report described the town as a “great resort of those [Seneca] people,” suggesting that Seneca and other Iroquois stopped there when passing through the region to hunt, trade, or make war farther west and south.

By the 1740s, she was the leader of a band of Mingo Seneca living along the three rivers – the Ohio, the Allegheny, and the Monongahela – near what is now Pittsburgh. In the words of another Seneca chief of the era, it was not unusual for women to occupy a position of power with the Iroquois. “Women have great influence on our young warriors,” he said. “It is no new thing to take women into our councils, particularly among the Seneca.” This was becoming increasingly true in the mid-1700s, as frequent skirmishes depleted the ranks of the male warriors, and the tribal system among the Iroquois began to break down.

In 1748, Conrad Weiser, Pennsylvania’s ambassador to the Indian nations, traveled through the area on his way to a council meeting, and quickly found out not only how much respect the aging leader commanded, but how quickly she became outraged when she felt slighted. When she found that Weiser had gone by without stopping in her village, she sent word to him demanding that he come and pay tribute. Not wishing to offend her, he quickly complied only to be further chided for not bringing enough gunpowder to give to her village.

Unlike many of her contemporaries, who sided with whoever offered the best deal at the time, Aliquippa remained fiercely loyal to the British throughout her life. When the French explorer Celeron came down the Allegheny River in 1749 to claim the Ohio country for the king of France, Aliquippa refused to receive him in her village. His journal entry of the thwarted visit hints again at her imperious attitude. “The Iroquois inhabit this place and it is an old woman of this nation who governs it,” he wrote. “She regards herself as a sovereign. She is entirely devoted to the English.”

By 1753, Aliquippa and her band were living at the junction of the Monongahela and Youghiogheny Rivers near the present site of McKeesport, Pennsylvania.

At a mere 20 years old, Major George Washington of the Virginia colonial militia, was sent by Governor Robert Dinwiddie to ask the French troops in the Ohio Valley to leave the region. After completing his mission, Washington struggled to John Fraser’s trading post, only to hear word that the Seneca queen was angry that he had bypassed her on the first leg of his trip. After taking some time to recover from his journey, the young major took a side trip to pay tribute to Aliquippa.

His journal entry of the visit to her in January 1754 was short and to the point, “I made her a Present of a Match Coat; & a Bottle of rum, which was thought much the better present of the two.” Washington could never have imagined that this tongue-in-cheek comment would eventually be immortalized in song and would be the best remembered event of Aliquippa’s life.

Queen Alliquippa was a key ally of the British leading up to the French and Indian War. She and Washington crossed paths again in July 1754, when he was under siege at Fort Necessity. Aliquippa and her son Kanuksusy, and warriors from her band of Mingo Seneca traveled to Fort Necessity to hole up with Washington’s small troop at the fort.

Washington, now a militia lieutenant colonel, wanted to hold a small ceremony honoring the queen for her loyalty and service to the British cause. Begging ill health, Aliquippa asked that her son be honored in her place. Washington agreed, and the ceremony went on. As part of the event, Kanuksusy was given the English name Colonel Fairfax, after one of Washington’s Virginia benefactors.

After the fall of Fort Necessity on July 4, 1754, Aliquippa and the remainder of her clan moved onto the fortified homestead of frontier trader George Croghan. That place, called Augswich, was where the tired Seneca leader, then probably over 80 years old, lived out her last few months.

Her son followed in her footsteps as a mediator between Indians and colonists, but his career was short-lived. After making two peace embassies among Indians in the northern Susquehanna Valley and Iroquois country in 1756, Newcastle fell ill and died in Philadelphia during the treaty negotiations he was helping to conduct.