Skip to content
History of American Women > Women and the gardren > Plum Blossoms and dew drops, the ladies of Japan

The reverence of nature in the Japanese garden has not changed since ancient times. Tied to the religious beliefs of Shinto, kami, spirits in rocks, plants, animals and the departed ancestors, played a role in the process of garden design that we have today. Gardens became symbolic and minimalist in their layout due to the confines of the geography of Japan.

When considering the garden and women of Japan the most interesting time is the Heian period (794-1185 AD). The Heian period is considered Japan’s Golden Age and for many reasons. It was a time when the Japanese withdrew themselves from contact with the Chinese. China was the big brother to Japan and had always been an enormous influence on the Japanese way of life. The Chinese did everything first and they did it extremely well. However at this time the Japanese edited and enhanced what they learned from China and made it their own. Buddhism, which had come to Japan through China and Korea, was adapted to allow it to coexist with the traditional Shinto religion. In painting, the emaki picture scrolls were at their artistic height at the end of the Heian period. Kanabungaku, a phonetic writing form based on spoken Japanese, was used to create some of the greatest literature of the Far East. This form of writing was known as ‘woman’s writing’. While both men and women were taught this phonetic language the men still preferred to write in the more prestigious Chinese. This gave women an advantage and the Heian period produced some of Japans greatest women writers. It is thanks to these writers that we have some understanding of Japanese Imperial Court life and an insight to how Japanese women were involved in the garden. 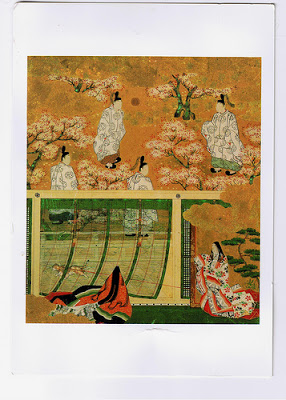 Women’s life in Japan was a constant throughout the centuries. The social strata was simply the very poor or the very rich. The peasant was simply trying to survive. Most women worked long hours in the rice paddies and much later in the textile industry. The nobles or aristocrats had large homes with large gardens. Life was better still for the ladies who lived and worked in the palace at Kyoto and partook in court life. They comprised primarily of ladies- in -waiting to the empress, and came from aristocratic families. While the female was in every way subordinate to the male, the Heian period did allow the woman to inherit and keep property. This did not last.

The style of house at this time was the shinden, a series of pavilions that ultimately formed the shape of a quadrangle. Each pavilion was connected to others by the use of covered corridors, walkways and bridges. Some pavilions had their own private gardens called the tsubo garden, intended primarily for the ladies of the manor. The complex would be enclosed by stone walls and with entrances to the east and west. There would be gates on the north, west and east sides which varied in height and ornamentation depending on the wealth of the owner. The gardens therefore were oriented southwards usually comprising of a lake (artificial) with a treed island in the middle. Also in the lake would be a line of interestingly formed rocks, carefully placed to represent ships anchored at night in the harbor on their way out to seek treasure. Two parallel streams wound their way under pavilions and around the gardens to the lake. The earth at the lake edge would be covered in fine white sand to reflect the beauty of the moon.

The intent was to absorb and reflect on the natural world (despite its artificial creation) in as much a harmonious way as possible. The architecture of the manor allowed for this with its sliding screens and removable blinds. The manor could be open to such a degree it would seem that there was no real division between the indoors and out. Naturally this had its drawbacks in the winter months when the cold permeated the entire home, but was a relief during the hot and humid days of summer. 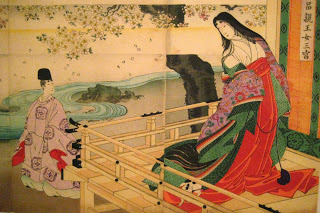 There is very little extant historical information regarding the day to day lives of the aristocracy. That is why the literature left to us from Sei Shonagon (The Pillow Book) and Murasaki Shikibu (The Tale of Genji), among others, is so important. Aristocratic ladies and ladies of the Imperial Court spent most of their lives indoors. They were raised to become wives of important men, ruling men (Japanese society was polygamous, and it was not unusual to be a second or third wife). They were literate, played various instruments, wrote poetry, and excelled at calligraphy – they were required to hold their own among the men. Notes written on paper to lovers, poetry contests or poems alone tended to involve nature and were full of symbolism. Despite a lack of context, as an example, the following two notes were sent between Her Majesty and Murasaki in The Tale of Genji.

“Though yours be a garden where only springtime is of price, suffer it that from my house autumn should blow a crimson leaf into your hand.”

“The light leaf scatters in the wind, and of the vaunted spring no tinge is left us, save where the pine-tree grips its ledge of stone.”

Ladies had plenty of leisure time and needed ways to keep themselves occupied. The garden provided a quiet place to reflect on nature. Shonagon talks of taking walks under the full bloom of the cherry trees, of ‘moon-viewing’ at night, admiring the fall blooms of chrysanthemums, and of building snow mountains in winter. It is known that the ladies delighted in rolling snowballs or piling snow in tubs or silver bowls. If the estate was large enough they would go out on the lake in boats and float around. They also enjoyed watching a form of boat racing called funakurabe.

Gardens were a hub of activity throughout the year with a seemingly endless list of festivals or ceremonies (I counted 34). Festivals were looked forward to in great anticipation by all sectors of society as a relief from dull hard lives, and so the festivals brought people to city gardens, temple gardens, and palace gardens.

The one festival that survives from Heian time is the Hanami or ‘flower viewing’ of the plum blossom or ume blossoms (Prunus mume or by common name Japanese apricot or Chinese plum). This festival was limited to the elite of the Court during the Heian period but eventually spread nationwide. Other festivals that are floral in symbolism included the Kamo Festival where Palace buildings, carriages, and private houses were decorated with hollyhock and the people wore hollyhock in their hair. There would be a large procession to the Kamo River followed later by sacred dances; The Iris Festival in which iris flowers were used for decoration and made into tea, horse racing and archery contests for the Guard; The Chrysanthemum Festival where the Emperor and his court inspected the chrysanthemums, drank tea infused with chrysanthemum, and followed by dancing.

Such was the use of the garden for the Japanese lady. Natural disasters and wars completely destroyed all of Heian architecture leaving only the natural surroundings. In time tea drinking and the tea ceremony changed the face of the garden, strolling gardens were created, and even later the addition of dry Zen gardens. The intrinsic nature of the Japanese garden remains.

“If any one asks where is the heart of a true Japanese, point to the wild cherry blossom, where it grows upon the tree.”