Skip to content
History of American Women > Women and the gardren > Flora, Goddess of Flowers 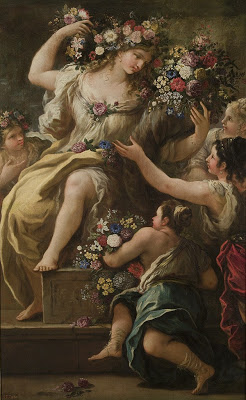 OK, so she is not a real person but Flora certainly had an influence in early Greek and Roman societies and later in the art world. But already I must partially retract the words that Flora was not a real person, because there seems to be some disagreement on this point. The Romans said that Flora was a woman of pleasure, wealthy due to her trade, and left her wealth to the Roman senate on the proviso that the money was used to celebrate her birthday. The seemingly embarrassed senators agreed to this donation (could it be because they were clients?), gave Flora the title of goddess and thereafter held the Floralia on her birthday.
True or not it makes a great story.

Flora is the Roman goddess of flowers but at one time also over fruit trees, vines and cereals. Her name comes from the Latin floris, meaning flower and her season is that of spring. It is known that Flora was honoured by the Sabines an old Italic tribe of the Appennines before the founding of Rome. The Italic people celebrated her as a fertility goddess. It is also known that a statue of Flora existed in Greece where she was worshiped (and known as Chloris), prior to the time of Roman worship. It was believed Flora could avert rust, a fungal disease of plants that causes orange growths the colour of iron, that is a particular problem for wheat.

The Floralia was a public religious festival to honour the goodwill of Flora. Created in the 6th century BC by the Romans, it took place in spring and lasted six days, the last three days of April and the first three days of May. The festival consisted of games and theatrical performances. Chariot races and circus games took place and everywhere were the symbols of Flora. It was traditional to have goats and hares running around. As well, flowers of lupines, bean flowers and vetch were scattered about. The Romans walked around holding bouquets of flowers or wore wreaths of flowers around their neck or in their hair. The theatrical performances were known to be ‘lewd’ or ‘bawdy’ and it was not at all unusual for prostitutes (who were devoted to Flora) to remove their clothing when called upon. It looked to be quite the wild party.

From Roman times through to the Renaissance Flora became equally known for her ties to the natural world as for her ties to prostitution and lewd self display. In paintings she would be portrayed either as the goddess of spring surrounded by plants and flowers with the emphasis on nature and abundance, or in contrast, an emphasis on nutrition, reproduction, and a recreational paradise.

Today her name is used botanically. By the eighteenth century the goddess of flowers metamorphosed into a scientific term. ‘Flora’ no longer represents flowers but “the plants of a particular region or period, listed by species and considered as a whole.” (see dictionary) Kind of sad.

If you are interested in one of Flora’s counterparts check out my post on Pomona, the goddess of fruiting trees and orchards – stay tuned for next posts.