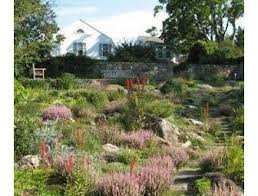 On the shores of Lake Sunapee, New Hampshire, John and Clara Stone Hay sought refuge from public life, and in 1888 they began acquiring abandoned farms that would eventually total nearly 1000 acres. In 1889 John and Clara hired architect George F. Hammond who designed a summerhouse in the style of the time with gambrel roof and a long open porch. They named it The Fells, a British term for a rocky upland pasture, due to his Scottish ancestry.

Image: The Fells Estate and Gardens
Lake Sunapee, New Hampshire
84 acres and a 22-room Colonial Revival home
Construction was completed in 1891, followed by a renovation in 1897. Clara Stone Hay had a garden of roses and hydrangeas here, though the lawn was still littered with boulders left from the ice-age. Teddy Roosevelt visited The Fells in the summer of 1902, during a campaign trip. A maple tree was planted in what is now the veranda, during his visit, which is now referred to as the Roosevelt Tree.

Clara Louise Stone, daughter of a wealthy Cleveland, Ohio railroad magnate Amasa Stone, was born on December 28, 1849. John Milton Hay was born on October 8, 1838, in a small brick house in Salem, Indiana. He was the third son of Dr. Charles Hay and Helen Leonard Hay. He was raised in Warsaw, Illinois, and studied at the private school of Episcopal clergyman Reverend Stephen Childs, and in 1851 went to Pittsfield Academy in Pike County, where he met John Nicolay, an older student who would influence his later career.

In 1852 John Hay went to the college at Springfield, and in 1855 was sent to Brown University in Providence, Rhode Island, where his grandfather David Augustus Leonard had graduated in 1792. At Brown, he developed an interest in poetry, and became a part of Providence’s literary circle which included Sarah Helen Whitman and Nora Perry.

When Hay graduated at age twenty-two, he was named Class Poet. He then unhappily began studying law in the office of his uncle Milton Hay in Springfield, Illinois, but it was a great stroke of luck. There he became acquainted with Abraham Lincoln, whose office was next door. When Lincoln was elected president, his secretary, John Nicolay, recommended John Hay for the job of assistant secretary to Lincoln.

Hay joined the Lincoln household, and lived in the northeast corner bedroom on the second floor of the White House, which he shared with John Nicolay. His cosmopolitan personality meshed easily with that of his more rustic boss, for whom he was almost a surrogate son. However, others saw him as arrogant and he clashed with Mary Todd Lincoln, whom he called the hellcat.

Journalist Noah Brooks, a friend of the Lincoln family, wrote about Lincoln and Hay:

Perhaps in all American public life nothing is more charming than the story of the relations which existed between these two men, the one in the bloom of youth, the other hastening toward his tragic end. Lincoln treated Hay with the affection of a father, only with more than a father’s freedom. If he waked at night he roused Hay, and they read together; in summer they rode in the afternoons, and dined in the evenings at the Soldiers’ Home. In public matters the older man reposed in the younger unlimited confidence.

Hay’s diary was a more valuable record of his interactions with and impressions of President Lincoln. On July 31, 1863, Hay wrote:

I had a considerable talk with the President this evening on this subject [of emancipation and reconstruction]. It deeply interests him now. He considers it the great question ever presented to practical statemanship. While the rest are grinding their little private organs for their own glorification the old man is working with the strength of a giant and the purity of an angel to do this great work.

For his boss, Hay had perpetual admiration. Hay was present when Lincoln died after being shot at Ford’s Theater and wrote:

I consider Lincoln Republicanism incarnate – with all its faults and all its virtues. As in spite of some rudenesses, Republicans is the sole hope of a sick world, so Lincoln with all his foibles, is the greatest character since Christ.

Returning to the United States in 1870, he left government and went to work for Whitelaw Reid as editorial writer and night editor for the New York Tribune. He continued to write poetry and fiction, and also began to put together, with John Nicolay, their ten-volume biography of Lincoln, Abraham Lincoln: A History. Portions of Hay’s diaries and letters were published in the book Lincoln and the Civil War.

In 1874 Hay married Clara Stone, moved to Cleveland and conducted the financial affairs of his father-in-law and was able to resume his writing. They had four children.

In 1878 he became Assistant Secretary of State under Rutherford B. Hayes and moved back to Washington. There he and Henry Adams, American historian and author, had adjoining townhouses designed by H. H. Richardson built across from the White House. The houses were demolished in 1927 and the site is now occupied by the Hay-Adams Hotel.

Hay served as editor of the New York Tribune in 1881 while Whitelaw Reid was in Europe; then, having decided to give up politics, he began his own travels.

Hay was named U.S. ambassador to the United Kingdom in 1897 when his friend William McKinley became President. Some of the recognition of the longstanding community of interests between that country and the United States was the result of Hay’s stay there. In September 1898 he was back in Washington to become Secretary of State.

Hay continued serving as Secretary of State after Theodore Roosevelt succeeded McKinley. Hay established the Open Door Policy in China (announced on January 2, 1900) and the preparations for the Panama Canal. He negotiated the treaties which were instrumental in clearing the way for the construction and use of the Canal. The events of the next few years – the end of the Spanish-American War, the Boxer Rebellion, the Russo-Japanese War and the Alaska boundary treaty – all took their toll on his health.

The group known as the Five of Hearts included John and Clara Hay, historian Henry Adams and his wife Clover Adams and Clarence King, pioneering geologist and entrepreneur. They knew every president from Abraham Lincoln to Theodore Roosevelt and befriended Henry James, Mark Twain, Edith Wharton, and a host of others. John Hay had hoped to establish a summer colony for his group of friends at Lake Sunapee, but after Clover Adams committed suicide, Hay abandoned those plans.

The Hays’ son Adelbert Stone Hay, an 1898 graduate from Yale, was at New Haven, Connecticut, to celebrate the commencement ceremonies for the year. He had just finished a session as consul for the USA at Pretoria, South Africa, and was about to be appointed assistant secretary to President McKinley. He apparently was sitting on a window sill at New Haven House to get some relief from the heat, when he went to sleep and fell sixty feet to his death on June 23, 1901. The Hays, of course, were devastated.

In 1904, John Hay was one of the first seven chosen for membership in the American Academy of Arts and Letters.

John Milton Hay died at The Fells on July 1, 1905, at the age of 66, and was buried in Cleveland’s Lake View Cemetery.

Clara Stone Hay died on April 25, 1914, and was buried beside her husband.

John Hay appears as a prominent character in Gore Vidal’s historical novels Lincoln and Empire. He was portrayed by John Huston in the 1975 film The Wind and the Lion and in the 1997 miniseries Rough Riders by actor and legendary United States Marine R. Lee Ermey.

Hay’s New Hampshire estate has been conserved as part of the John Hay National Wildlife Refuge, the John Hay Land Studies Center and the Garden Conservancy’s Fells Reservation. The refuge was established in 1987 and the historic buildings and immediate grounds and gardens, known as The Fells, are managed through an agreement with the Friends of John Hay National Wildlife Refuge.