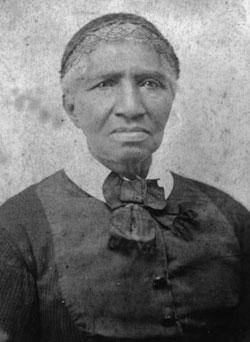 Pioneer and Philanthropist in Early Colorado

Traditionally, women’s philanthropic activities were tied to their husband’s wealth, but some women did it all by themselves. A freed slave, Clara Brown established a successful laundry business during the Colorado Gold Rush. She was a black pioneer, the first African American woman in Denver, a community leader and philanthropist.

Early Years
Born a slave in Virginia in 1800, at a young age Clara Brown and her mother were sold to Ambrose Smith, a Virginian tobacco farmer. Smith was a kindly man and a devout Methodist; he took Clara and her mother to his church services.

Marriage and Separation
At the age of 18, Clara Brown married a slave named Richard, and over the years they had four children: Richard, Margaret, and twins Paulina Ann and Eliza Jane. At age eight, Paulina Ann drowned. When Clara was 35, Ambrose Smith died and her entire family was split up and sold off one by one to different owners. Clara was purchased by George Brown, a plantation owner in Logan County, Kentucky, for whom she worked as a house slave. She would spend much of her life searching for her loved ones.

Free at Last
When George Brown died in 1856; as stipulated in his will, Clara was granted her freedom. She immediately moved to St. Louis, where she believed Missouri law protected free blacks. Clara had heard rumors that her daughter Eliza Jane had moved west years earlier, and decided to search for the family she had lost. Clara headed west, moving from state to state while working as a cook and laundress.

Going West
Brown worked as a maid and cook for a family leaving for Kansas, but she was anxious to move farther west. She had saved enough money to pay for the trip, but blacks were prohibited from riding the stagecoaches. In April 1859, she met Colonel Benjamin Wadsworth, who offered her a job as a cook for 26 men in exchange for free transportation on a wagon train headed for Colorado.

Clara Brown walked most of the dusty, hot and miserable eight-week 700-mile journey, arriving at Denver in June 1859. She was Denver’s first black woman resident, and she is believed to be the first African American woman involved in the Colorado Gold Rush. Everywhere she went she opened a laundry shop, and Denver was no exception.

Colorado Gold Rush
The Colorado Gold Rush (sometimes called Pike’s Peak Gold Rush) was the boom in mining that began in July 1858 and lasted until February 1861. An estimated 100,000 gold miner wannabes participated in one of the greatest gold rushes in American history; they were known as Fifty-Niners for the busiest year of the rush.

The Colorado Gold Rush took place a decade after the California Gold Rush, produced a dramatic but temporary increase in population in the Southern Rocky Mountains. Scores of mining camps sprang up virtually overnight; a few developed into cities, like Boulder City and Idaho Springs, while others soon became ghost towns.

On to Central City
Not finding any news of her daughter in Denver, Brown followed the tide of miners into the mountains and the town of Central City, which was made up of gold mines, stores, saloons, and shacks where miners lived with their families. There, of course, she opened a laundry business for gold miners; she also worked as a mid-wife, cook and nurse maid.

Brown collected whatever gold dust came out of the miners’ pockets and made extra money by cooking and cleaning for the miners, working long hours and denying herself any luxuries. With her saved earnings she funded the construction of St. James Methodist Church, and she was one of the founding members of the first Sunday school in existence, using her home as the classroom.

Brown gave generously to those in her community. Her home in Central City served as a hospital, church, and hotel to less fortunate, and she was such a good nurse that everyone came to her with various ailments. Pregnant women often came to Clara to help deliver their babies.

Known lovingly as Aunt Clara, Brown took on a partner and expanded her laundry business. She invested her earnings in real estate and mines, and after a few years had accumulated $10,000 in savings, a staggering amount for one person to accumulate at that time. A keen businesswoman, she reportedly owned building lots in Denver, houses in Central City, and mines in Boulder, Georgetown and Idaho Springs.
Author Frank C. Young wrote this about Clara Brown:

In our little community everyone knew everyone else, whatever might be the positive differences in social position. In this connection I might speak of Aunt Clara Brown. She was raised in old Kentucky, and with her won freedom secured after years of persistent, patient toil, when well along in life she joined the procession of gold seekers to Gregory Gulch [later named Central City].

She continued her philanthropy among the needy for the rest of her life and spent large sums of money helping other Blacks move west. Far and wide, she was known as the Angel of the Rockies. She frequently:

grubstaked miners who had no other means of support while they looked for gold in the mountains and was repaid handsomely for her kindness and generosity by those who struck pay dirt.

Black Exodus
In 1879, an exodus from slavery after Reconstruction began in earnest. More than 900 African American families from Mississippi stopped in St. Louis on their way to the West. Acting on behalf of then Colorado Governor Frederick Pitkin, Clara Brown assisted black families move to Colorado and get jobs in various mining camps. She financed many of these families with her own money.

By age eighty Brown’s funds were depleted due to monies spent on charitable contributions and efforts to find her family. When she could no longer sustain the higher altitude, Brown moved to Denver and lived in the home of a friend.

In Search of Eliza Jane
After years of writing letters to officials in various locations, in 1882 Brown received news that a black woman named Eliza Jane was living in Council Bluffs, Iowa, who was about the right age to be Clara’s daughter. Clara immediately traveled there to see if this woman was her Eliza Jane; miraculously, it was!

The story of this heartwarming reunion was published by newspapers throughout the west. The Council Bluffs Nonpareil reported on March 4, 1882 that Brown was “still strong, vigorous, tall, her hair thickly streaked with gray, her face kind.” The two women returned to Denver and lived there together until Clara’s death.

In 1885 Clara Brown was elected the first African American and first female member of the Society of Colorado Pioneers for her role in the early history of Colorado and the Colorado Gold Rush. She was interviewed by the Denver Tribune-Republican on June 26, 1885. The Society was established to recognize pioneers who came to Colorado before 1861:

The early pioneer came to a silent wilderness. He took hold of the territory ‘in the raw.’ He had nothing but his hands, his energy and his courage to start a new civilization in the wilderness.

In 1885, Clara Brown died in her sleep October 26, 1885. The Society of Colorado Pioneers buried her with honors. Crowds flocked to her funeral at Central Presbyterian Church in Denver. At graveside services Colorado governor James B. Grant, Denver mayor John L. Routt praised Aunt Clara as:

the kind old friend whose heart always responded to the cry of distress, and who, rising from the humble position of slave to the angelic type of noble woman, won our sympathy and commanded our respect. 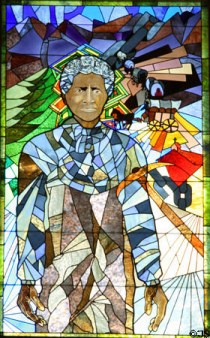 Honors
A plaque commemorating the life of Clara Brown hangs at St. James Methodist Church in Central City, stating that her home had served as the first church in Central City. In 1930, a chair in the Central City Opera House was installed in her honor. Clara’s life and achievements were commemorated with a stained glass portrait of her in the Old Supreme Court Chambers of the state capitol in 1977.

Clara Brown is considered “one of the 100 most influential women in the history of Colorado.” She was inducted into the Colorado Women’s Hall of Fame in 1989. In 2003, an opera was written about her life, called Gabriel’s Daughter. It debuted in Central City, Colorado.