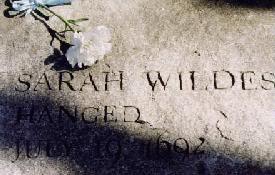 In 1692 the Puritans had governmental control of the Massachusetts Bay Colony, and only members of the Puritan church were allowed to vote. Well-to-do merchants were complaining, and King Charles I was considering changing the charter for Massachusetts to allow all property owners to vote. This would mean loss of power for the Puritans. All the upper echelons of the church were enraged at the prospect.

John Wildes’ first wife Priscilla died in 1662, and he remarried in 1663 to Sarah Averill. By this time, John was very prominent in Topsfield politics (at the time of his death he was known in Topsfield as “Old Father Wildes.” He was responsible for surveying the land to establish the boundary between Topsfield and Salem. The survey was a matter of great contention, and it was ultimately resolved in Topsfield’s favor.

The Accusations
As early as 1686, Mary Reddington, sister of John Wildes’ first wife and his next door neighbor, accused Sarah Wildes of witchcraft, and began to spread rumors to that affect. At that time, a husband was responsible for everything his wife did. John Wildes threatened to sue Reddington’s husband for libel because of her gossiping. Reddington begged him not to, and assured Wildes that no further rumors would come from Mary. The damage, however, was already done.

On April 21, 1692, nine people were arrested for witchcraft, including Nehemiah Abbot, William and Deliverance Hobbs, Sarah and Edward Bishop, Mary Easty, Mary Black, Sarah Wildes and Mary English. Up until then, the accused had only come from the Salem area, but five of these accused were from Topsfield. Eventually the hysteria of the Salem Witch Trials spread to 22 other communities.

Both John Wildes and their son Ephraim declared that Sarah was innocent of the charges. The intrigue underlying the witchcraft trials indicates that money and politics were the true source of the troubles. Not that Sarah had such a sterling reputation. In her youth, she was known to be a bit wild, and was even arrested twice for lewd behavior. Nothing is known about one incident, but the other was for wearing a brightly colored scarf.

John and Sarah Wildes’ son Ephraim was, like his father, involved with town politics. Ephraim held the positions of town treasurer and constable during the period of the Salem Witchcraft hysteria. He was ordered by the Marshall, George Herrick, to arrest Deliverance Hobbs, who later made a jailhouse confession and implicated Sarah Wildes as a witch, probably to get back at Ephraim for arresting her.

This opened the door for the power-hungry leaders of the Salem Puritan church to target and decimate the Wildes family. As this quickly blossomed with further jailhouse confessions with the hope of saving themselves, most of John Wildes’ children were accused of witchcraft, and it was by order of Marshall Herrick that Constable Ephraim Wildes arrest them.

The Trial
The trials themselves were a sham. The court made its own rules and continued to do so as it went along. Defendants were guilty until proven innocent. Defendants were not allowed legal counsel. Yes, Sarah Wildes was likely a gruff woman. There were many incidents where she aggravated people, and her neighbors testified against her.

On June 29, 1692, many different people were brought to the stand, and one by one they all told their own stories of witchcraft and every story had Sarah Wildes as the satanic witch. Rebecca Nurse, Susannah Martin, Sarah Good, and Elizabeth Howe were tried for witchcraft at that same trial. They were all found guilty and sentenced to hang.

Whereas Sarah Good Wife of William Good of Salem Village, Rebecca Nurse wife of Francis Nurse of Salem Village, Susanna Martin of Amesbury, Elizabeth Howe widow of James How of Ipswich, Sarah Wild (sic) wife of John Wild of Topsfield, all of the County of Essex in their Majesty’s Province of the Massachusetts Bay in New England.

At A Court held by Adjournment for Our Sovereign Lord & Lady Kind William & Queen Mary for the said County of Essex at Salem in the said County, on the 29th day of June [torn] were severally arraigned on Several Indictments for the horrible Crime of Witchcraft by them, practiced & Committed On Several persons and pleading not guilty did for their Trial put themselves on God & Their Country, whereupon they were Each of them found & brought in Guilty by the Jury that passed On them according to their respective Indictments, and Sentence of death did then pass upon them as the Law directs.

Execution whereof yet remains to be done: to will & Command you that upon Tuesday next being the 19th day for [torn] Instant July between the hours of Eight & [torn] in [torn] forenoon the same day you Safely conduct the said Sarah Good, Rebecca Nurse, Susann Martin, Elizabeth Howe, & Sarah Wild (sic) From jail in Salem aforesaid to the place of Execution & there Cause them & Every of them to be hanged by the Neck until they be dead.

And of the doings herein make return to the Clerk of the said Court & this precept and hereof you are not to fail at your peril, and this Shall be your sufficient Warrant given under my hand & seal at Boston the 12th day of July in the fourth year of Reign of our Sovereigns Lord & Lady Wm & Mary King and Queen.

The Execution
Sarah Averill Wildes was hanged in Salem on July 19, 1692, condemned by the Court of Essex County for witchcraft. She was 65 years old. Accompanying Sarah Wildes to the gallows on that day were Sarah Good, Elizabeth Howe, Susannah Martin, and Rebecca Nurse.