Rebecca Towne was baptized at Yarmouth, England, on February 21, 1621. She came to Salem, Massachusetts with her family in 1640. In about 1645, she married Francis Nurse, who was described as a tray maker. The making of trays and similar articles of domestic use was important employment in the remote countryside.

In 1692, the “black cloud of the witchcraft delusion descended upon Salem Village.” Rebecca Nurse was a 71-year-old invalid who had raised a family of eight children. Her family had been involved in several land disputes, which could have caused ill-feelings among some of the residents of Salem. Nevertheless, most of her contemporaries sympathized with her.

The Accusation
Soon after the first of the women had been accused of witchcraft, Rebecca Nurse discovered that her name had also been mentioned as a suspect. On March 23, a warrant was issued for her arrest upon the complaint of Edward and John Putnam – the Putnam family was among those that had been involved in land disputes with Rebecca and her husband. Rebecca stated that she was innocent, but was committed to the Salem jail.

It was written of Nurse:

This venerable lady, whose conversation and bearing were so truly saint-like, was an invalid of extremely delicate condition and appearance, the mother of a large family, embracing sons, daughters, grandchildren, and one or more great-grand children. She was a woman of piety, and simplicity of heart.

That her reputation was virtually unblemished was evidenced by the fact that several of the most active accusers of others were hesitant in their accusations of Rebecca, and many who had kept silent during the proceedings against others, came forward and spoke out on Rebecca’s behalf, despite the dangers of doing so.

Thirty-nine of the most prominent members of the community signed a petition on Rebecca’s behalf, and several others wrote individual petitions vouching for her innocence. One of the signers of the petition, Jonathan Putnam, had originally sworn out the complaint against her, but apparently had later changed his mind on the matter of her guilt.

The Trial
On June 29, 1692, Rebecca Nurse, Susannah Martin, Sarah Wildes, Sarah Good, and Elizabeth Howe were tried for witchcraft. During Rebecca’s questioning, the magistrate showed signs of doubting her guilt, because of her age, character, appearance, and professions of innocence. But every time he began to waiver on the issue, someone else in the crowd would heatedly accuse her, or one of the afflicted girls would go into fits again.

When she realized that the magistrate and the audience had sided with the afflicted girls, Rebecca replied, “I have got nobody to look to but God.” She then tried to raise her hands, but the afflicted girls fell into dreadful fits at the motion.

The Verdict
On June 30, the jury came back with a verdict of Not Guilty. When this was announced, there was a large and hideous outcry from both the afflicted girls and the spectators. The magistrates urged the jury to reconsider, which wasn’t uncommon in the seventeenth century. Chief Justice Stoughton asked the jury if they had understood the implications of something Nurse had said during her trial.

Though it seems that none of the accused realized it at the time, no one who confessed to witchcraft was ever executed. They merely stated that they had dabbled in the black arts, promised never to do so again, and all was forgiven. These confessors often accused others of witchcraft, because the magistrates would then look upon them kindly and release them from prison.

During Rebecca’s trial, Abigail Hobbs had confessed to witchcraft and had testified that Rebecca was truly a witch. Nurse had said “What do you bring her? She is one of us,” meaning that Hobbs was a fellow prisoner. Rebecca was partially hard of hearing, and exhausted from the day in court. When she was asked to explain her words, “she is one of us,” she didn’t hear the question. The jury took her silence as an indication of guilt.

The jury deliberated a second time and came back with a verdict of Guilty.

Rebecca’s family immediately did what they could to rectify the mistake that had caused her to be condemned. She was granted a reprieve by Governor Phips, but when it was issued, the accusers began having renewed fits. The community saw these fits as conclusive proof of Nurse’s guilt.

On July 3, 1692, the Reverend Nicholas Noyes had Rebecca brought from her prison cell to the church she and her family attended. When she arrived, the Reverend excommunicated her before the congregation. Not until 1699 were members of the Nurse family welcomed back to communion at the church, and it was fifteen years later before the excommunication of Rebecca Nurse was revoked.

The Execution
On July 19, 1692, Rebecca Nurse, Susannah Martin, Elizabeth Howe, Sarah Good and Sarah Wildes were hauled in a cart to Gallows Hill. On the gallows, Rebecca was “a model of Christian behavior.” Legend says that at midnight Francis Nurse, his sons and sons-in-law found Rebecca’s body in the common grave where it had been flung and carried it home for a proper burial. 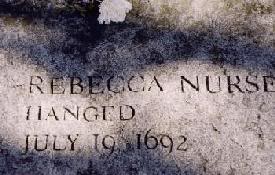 Public outrage at Nurse’s conviction and execution has been credited with generating the first vocal opposition to the Salem witchcraft trials. In 1711, her family was compensated by the government for her wrongful death.

Rebecca Nurse’s story is well-known, and has been written in many historical and fictionalized accounts of the trials. She is a central character in Arthur Miller’s play, The Crucible. The PBS film, Three Sovereigns For Sarah, depicts Nurse and her family members as main characters, and features Vanessa Redgrave as Sarah Cloyce – Rebecca Nurse’s sister – who was imprisoned for more than a year, but was released after the witchcraft trials came to an end.