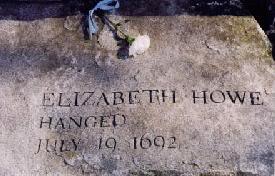 Topsfield, Massachusetts
New England was organized into townships roughly six miles square with a village surrounding the “commons”, which was a central community grazing ground, with the church and community meeting house facing the commons. Town meetings elected town officers and the sheriff, raised taxes, and tried to resolve any problems present in the community. Many communities set up different rules than those pronounced by the General Court in Boston.

The people of such communities were very dependent upon each other. Individuals interacted by means of the sale of goods or labor or by barter for other goods or labor. One’s ability to generate trades was economically necessary, but generosity was needed as well since all these dealings were seen and known throughout the whole community.

Elizabeth Jackson was born in England in May of 1637. She and her family immigrated to the Massachusetts Bay Colony in the spring of 1638. Elizabeth was one year old and had just become the older sister of recently born John.

In August 1638, the John landed at Salem where the new arrivals were welcomed. The Jacksons went to Boston where they lived with families through the winter of 1638-39, helping with household and farming chores. By spring 1639 the group gained permission from the General Court of The Massachusetts Bay Colony to establish a “plantation” settlement between Ipswich, founded in 1633, and Newbury, founded in 1635, along the Atlantic coast twenty five miles north of Boston.

They called it Rowley, after their minister’s original parish in East Yorkshire. House lots and properties were laid out along the town brook giving each family access to fresh water. The Jacksons received a one-and-one-half acre lot, but by 1652 they owned twelve acres in the settlement.

In 1658, when she was twenty one years old, Elizabeth Jackson married James Howe, who came from the neighboring town of Ipswich. There was much social interaction between Rowley and Ipswich, which had been founded only six years before Rowley. James was a little older than Elizabeth and totally blind.

Elizabeth moved to a section of Ipswich called Topsfield, very close to Salem. Her marriage seems to have been successful. She had five children: Elizabeth in 1661, Mary in 1664, John in 1671, Abigail in 1673, and Deborah in 1685. Her last child was born when she was forty eight.

Elizabeth stayed in close touch with her parents, and her father gave the Howes a parcel of land he owned in West Rowley. A woman in these early colonial times, who ran a household and carried out extra duties and activities because her husband was blind, might have given the impression of being a busy body, over-extending her activities, and making decisions well beyond the accepted level for a retiring domestic Puritan housewife.

Elizabeth apparently was not a submissive female figure. She had to take strong positions to safeguard the interests of her blind husband and her children. She did have the gift of attracting children to her, and is described as always having many more than her own in tow.

The problem began in 1682 with neighbors in Topsfield, the Perleys. Sam Perley from Ipswich had married Ruth Trumble from Rowley six years after the Howes’ marriage. Elizabeth’s youngest sister Deborah had married John Trumble, so Elizabeth and Ruth were sisters-in-law.

The Accusations
The Perleys’ ten-year-old daughter, Hannah, who had previously been part of Elizabeth’s children’s group in the Howe household, became ill. She had periodic fits, during which she sometimes accused Elizabeth for causing her illness through witchcraft. After the fit ended, Hannah recanted, and no action was taken.

Ten years later in nearby Salem village, a number of unnatural or unexplained events took place and members of the town were severely frightened about their future survival. This kind of uncertainty and personal fright occurs especially when a rather tightly interdependent village group suddenly evolves to a point where individuals have more personal freedom to follow their own course and not spend their full efforts in fitting into the community as they had done before.

This plus the fact that there was a group of girls who had listened to a Barbados slave, Tituba, working in the minister’s house who ranted about black magic and Satanism. The girls learned that by having screaming spasms and accusing women of witchcraft, all the adults started paying attention to them. As their importance grew so did the number of their accusations.

The evidence they stated was always spectral, saying that they had seen the image of the accused in a dream, or heard the accused make a remark that later caused damage to a neighbor. None of this was provable information. Statements such as this would be quickly dismissed from a hearing or trial in modern times. Yet in those times of a changing society and the Puritan fear of evil, such evidence was accepted.

Then, when the accused was brought into their presence, the girls’ fits stopped when they were touched by the accused. This showed that the accused had witch-like power to stop their suffering. These same girls from Salem village were invited to several nearby towns to identify witches in those towns, which they happily did. Almost all of the accused were middle-aged women who probably were a little more independent and intelligent than the average Puritan housewife of the time.

A Special Court
Sir William Phipps, the new Governor, found The Massachusetts Bay Colony in a turmoil with many accused witches, but no trials had taken place. Under Common Law, the accused had to be tried in civil court and on conviction the punishment was death. The Governor appointed a special court in March 1692, which was to go to different towns in the Colony and set up preliminary hearings, and conduct trials.

The ten year old accusation of witchcraft was revived, and Elizabeth Howe was called for a hearing and put in prison for trial. Elizabeth had friends and family who tried to support and defend her, and never did her blind husband or her children change their loving feelings towards her. They walked miles twice a week to visit her in prison, bringing her things to eat and objects to provide her comfort.

Generally the imprisoned accused witches were very harshly treated, starved, and repeatedly examined for witches marks, the purpose of which was to get a confession of guilt from the accused. If an accused confessed, then all the spectral evidence could be overlooked. Many of the accused did confess, and so survived by promising to give up witchcraft. Elizabeth never confessed and always proclaimed she was innocent of any witch behavior.

Elizabeth’s Trial
Elizabeth Howe was one of five women in the first Salem witch trial on June 30th, 1692. First, there were the swooning girls, who revived miraculously when Elizabeth touched them. Then there was an accounting by so-called damaged individuals who said they had been visited in their dreams by ghosts who claimed they had been killed by Elizabeth.

It was also noted that Elizabeth had not been admitted to the Ipswich church despite several applications, and that she had bewitched Joseph Safford’s wife into actively supporting her, but when Mrs. Safford was visited by shapes in Elizabeth’s image she retracted her support.

In Elizabeth’s defense, James Howe, her father-in-law who was then ninety four years old, presented a letter to the court commending Elizabeth as a loving, obedient, and kind person who looked after his blind son and their children. The minister and his assistant from Rowley also spoke on her behalf.

Many of her neighbors who had known her for more than twenty years testified that “her words and actions were always such as well became a good Christian”. Two couples said they had never heard her speak against those who were accusing her, and had heard her say “indeed I pray that God would forgive them for they harm themselves more than me.”

Convicted and Hanged
This was the trial, and Elizabeth was convicted of being a witch and sentenced to death by hanging, along with the four other accused witches. The court had convicted all who were brought before it without exception. After the conviction one of Elizabeth’s daughters went to Boston to seek executive clemency, but this was refused.

Three weeks later on July 19, 1692, Elizabeth Howe and the others were hanged, purportedly on Gallows Hill by the ocean in west Salem.

That limestone ridge still carries the name Gallows Hill. Most of the contemporary accounts of the hangings describe the site as high up in open air, taking place there because the Devil was supposed to control the air and so hanging the witches in the Devil’s air was an affront to the Devil’s power.