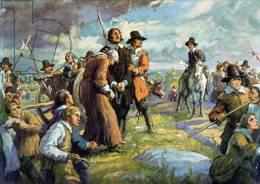 In a world where people saw the Devil lurking behind every misfortune, belief in witches was common in seventeenth century New England. What made the events in Salem unique was the extent of the witch hysteria, which led to the imprisonment of more than 100 men and women and the execution of 13 women.

In the late spring 1692, a number of unnatural or unexplained events took place and members of the town of Salem were severely frightened about their future survival. About that same time, a group of adolescent girls in Salem began having strange fits, during which they accused several people, primarily middle-aged women, of being witches.

The girls learned that by having screaming spasms and accusing women of witchcraft, all the adults started paying attention to them. As their importance grew so did the number of their accusations. The evidence they stated was always spectral: based on dreams and visions. Officials convened a court to hear the charges of witchcraft.

Procedure Used in Witchcraft Trials
• The afflicted person made a complaint to the Magistrate about a suspected witch.
• The Magistrate issued a warrant for the arrest of the accused person.
• The accused person was taken into custody and examined by two or more Magistrates.
• The case was presented to the Grand Jury and depositions were entered into evidence.
• If the accused was indicted by the Grand Jury, he or she was sent to jail to await trial.
• A jury instructed by the Magistrate decided the defendant’s guilt or innocence.
• The convicted defendant received his or her sentence from the Court.
• In each case at Salem, the convicted defendant was sentenced to be hanged.
• The Sheriff and his deputies carried out the sentence on the specified date.

Many of the accusers came from a traditional way of life tied to farming and the church, whereas a number of the accused witches were members of a rising commercial class of small shopkeepers and tradesmen. Salem’s struggle for social and political power between the older traditional groups and the newer commercial class was one repeated in communities throughout American history.

Amazingly, those who confessed to being witches – whether it was true or not – were not executed. The Puritans believed that once a person made a full confession, his or her fate should be left in God’s hands, not man’s. These confessors were kept apart from the other prisoners, and were called upon to testify in other trials if they could be helpful to the prosecution. Fifty-five people in the Salem area confessed to witchcraft in 1692.

From June through September of 1692, nineteen men and women were carted to Gallows Hill, a barren slope near Salem, for hanging. Another man of over eighty years was pressed to death under heavy stones for refusing to submit to a trial on witchcraft charges. More than 100 others were still in jail – among them some of the town’s most prominent citizens.

Alice Parker
Alice Parker was a simple housewife residing in Salem until she was accused of witchcraft by Mary Warren, who also accused Parker of murdering her mother on May 12, 1992. It was said that people felt sick after she visited them and that she had sent animals to attack people for her. Parker proclaimed her innocence until the time of her death. She was hanged on September 17.

Ann Pudeator
The trial of Ann Pudeator began on July 2, 1692. The girls who had accused Pudeator fell on the courtroom floor in fits, giving a particularly striking exhibition of their suffering due to witchcraft, including delirious shrieks. One accused Ann of having tormented her by appearing with the book of the devil and asking her to sign it. Pudeator, at that time somewhere between 70 and 75 years old, was executed on September 22.

Bridget Bishop
Bridget Bishop was the first woman to be put on trial for witchcraft. Although Bishop was accused by more individuals than any other defendant, it was not so much her acts of witchcraft as it was her flamboyant lifestyle and exotic manner of dress. Her blatant disregard for the respected standards of Puritan society made her a prime target for accusations of witchcraft.

Bishop ran a tavern outside of Salem, but totally disregarded the laws governing taverns. She stayed open late into the night, allowing her customers, some only in their teens, to drink and play the forbidden game of shovelboard, carousing loudly enough to disturb her neighbors’ sleep. Her reputation was undoubtedly widespread by 1692 – she had never met any of her accusers until her questioning at trial.

On June 10, 1692 the High Sheriff took Bridget Bishop to Gallows Hill, a barren and rocky elevation on the west side of town, and hanged her from the branches of a great oak tree. Although the whole town turned out to see the execution, Bridget refused to show any sign of remorse. Less than a year later, several of those who had testified against her, in deathbed confessions claimed that their accusations were “deluded by the Devil.”

Elizabeth Jackson Howe
A neighbor’s ten-year-old daughter became sick, and had periodic fits, during which she sometimes accused Elizabeth for causing her illness through witchcraft. Evidence was given by so-called damaged individuals who said they had been visited in their dreams by ghosts who claimed they had been killed by Elizabeth. Many of her neighbors came to her defense, but Howe was hanged on July 19, 1692.

Margaret Stevenson Scott
At first glance, Margaret Scott seems to have lived an uneventful life, except for the high infant mortality rate among her children. Out of her seven children, only three lived to adulthood. Scott also suffered from the economic and social effects of being a widow for a prolonged period. Often widows who were over fifty and not wealthy, were unable to find a new spouse, and were reduced to poverty and begging, which exposed a woman to suspicion. Scott was executed on September 22, 1692.

Martha Corey
Martha Corey lived on a farm in the southwest corner of Salem village with her husband Giles, a prosperous eighty-year-old farmer. In March 1692, Martha publicly questioned the sincerity of the group of Salem girls who had condemned several people as witches. The girls responded by accusing Martha of witchcraft. On September 10, 1692, Martha was convicted of witchcraft; she was hanged on Gallows Hill on September 22, 1692.

Other Women Hanged for Witchcraft in Salem
You will find individual posts on this blog for these women: Rebecca Nurse, Sarah Good, Sarah Wildes and Susannah Martin were executed on July 19, 1692. Martha Allen Carrier was killed on August 19. Mary Ayer Parker and Mary Easty were hanged on Gallows Hill on September 22, 1692.

The witch hysteria began to spread to other communities, which greatly concerned some citizens. On October 3, 1692 Increase Mather, then president of Harvard, denounced the use of spectral evidence: “It were better that ten suspected witches should escape than one innocent person be condemned.” In response Massachusetts Governor William Phipps prohibited further arrests, released many accused witches and dissolved the Court on October 29.

Then, almost as soon as it had begun, it was over. Phipps pardoned all who were in prison on witchcraft charges by May 1693. On January 14, 1697, the General Court ordered a day of fasting and soul-searching for the tragedy at Salem. In 1702, the General Court declared the trials unlawful; in 1711, they passed a bill restoring the rights and good names of those accused and granted 600 pounds restitution to their heirs.

More than three hundred years later, we still call false accusations against a large number of people a witch hunt.