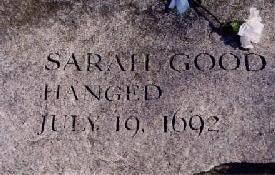 Sarah Solart was the daughter of a prosperous Wenham innkeeper, John Solart. Solart took his own life by drowning in 1672 when Sarah was 17, leaving an estate of 500 pounds. After testimony of an oral will, the estate was divided between his widow and her two eldest sons, with a portion to be paid to each of the seven daughters when they came of age. Mrs. Solart quickly remarried, and her new husband came into possession of her share and the unpaid shares of the daughters, and most of the daughters never received a portion of the Solart estate.

Sarah married a former indentured servant, Daniel Poole, who hired himself out as a laborer. But even with a chronic labor shortage in the colony, individuals hesitated hiring her husband, because that would mean taking Sarah into the household, and she was considered shrewish, idle, and slovenly.

Poole died sometime after 1682, leaving Sarah only debts, which some said she created. Regardless of the cause, Sarah and her second husband, William Good, were held responsible for paying it. A portion of their land was seized and sold to satisfy their creditors, and shortly thereafter they sold the rest of their land, apparently out of necessity.

By the time of the witchcraft trials, Sarah and her husband were homeless, destitute, and she was reduced to begging for work, food, and shelter. With matted grey hair and a leathered, lined face, Sarah Good looked to be seventy, though she was only 37 years old in 1692.

The Accusations
Sarah Good was accused of witchcraft on February 25, 1692, when Abigail Williams, Elizabeth Hubbard, and Ann Putnam, Jr. claimed to be bewitched under her hand. The young girls appeared to have been bitten, pinched, and otherwise tormented. They would have fits in which their bodies would appear to involuntarily convulse, their eyes rolling into the back of their heads, and their mouths hanging open.

Good was one of the first three women to be brought in at Salem on the charge of witchcraft, after having been identified as a witch by Tituba, an Indian slave who had also been called a witch. Sarah fit the prevailing stereotype quite well. She didn’t attend church, and had been begging door-to-door and making a general nuisance of herself. With her clay pipe, she even looked the part of a witch.

She was arrested on February 29th, 1692. A strong woman, she nearly overpowered the sheriff who came to arrest her. During the initial questioning of the three women, Good accused Sarah Osborne of being a witch, and Tituba confessed to witchcraft. Tituba was released, but Good and Osborne were sent to jail. Four- year-old Dorcas Good, Sarah’s only child, was arrested on March 23, and implicated her mother as a witch.

At the time of her trial, Good was described as “a forlorn, friendless, and forsaken creature.” Her habit of scolding and cursing neighbors who were unresponsive to her requests for charity generated a wealth of testimony at her trials. At least seven people testified as to her angry muttering and general turbulence after the refusal of charity. Even her husband testified against her. He didn’t swear she was a witch, but what he did say tended to prejudice the magistrates and public against her.

The Trial
On June 29th, along with five other women, Sarah Good was tried and convicted of witchcraft. The proceedings against Good were described as “cruel, and shameful to the highest degree.” She was presumed guilty from the start. Some of the evidence against her was known to be false at the time of her examination. During the trial, one of the afflicted girls cried out that she was being stabbed with a knife by the Good’s apparition.

Good was pregnant when she was arrested, and her newborn child died in prison. Good was joined in prison by her daughter, Dorcas – even though Dorcas had testified against her mother. Dorcas was to remain mentally impaired for the rest of her life as a result of her imprisonment.

The Execution
Good was hanged on Gallows Hill on July 19, 1692. She failed to yield to judicial pressure to confess, and showed no remorse at her execution. In fact, in response to an attempt by Minister Nicholas Noyes to elicit a confession, Good called out from the scaffolding, “You are a liar. I am no more a witch than you are a wizard, and if you take away my life God will give you blood to drink.”

Although he clearly deserved nothing, since he was an adverse witness against his wife and did what he could to stir up the prosecution against her, William Good was given one of the larger sums of compensation from the government in 1711.