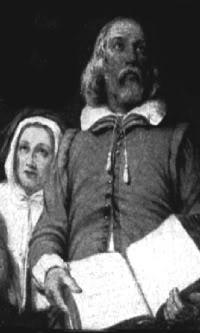 Martha Corey lived on a farm in the southwest corner of Salem village with her husband Giles, a prosperous, uneducated, eighty-year-old farmer and full member of the church. In March 1692, Martha Corey made the mistake of publicly questioning the sincerity of the accusations of the afflicted girls – a group of Salem girls who had condemned several people as witches.

The Accusation
When the girls learned of Martha’s attacks, they quickly responded by accusing her of witchcraft. When the girls first mentioned the name of Martha Corey, Edward Putnam and Ezekiel Cheever went to see Martha about the matter on March 12th. On the way, they saw Ann Putnam and asked her what clothes Mrs. Corey wore when her apparition appeared to her as Ann had said. Ann said that she was so blinded she could not see.

Arriving at the Cory house, Mrs. Cory said to them, “I know what you have come for. You are come to talk with me about being a witch, but I am none. I cannot help people talking about me.” She inquired whether the afflicted girl had attempted to describe her clothes. This last statement was deemed to be supernatural, and was used against her at her trial. She told them that she did not think there were any witches.

The Arrest
On Saturday March 19, 1692, a warrant was issued for the arrest of Martha Corey. The following Monday, she was arrested and brought to Ingersoll’s Tavern for an examination before Justices Hathorne and Corwin. During questioning, the girls who had accused Martha of witchcraft claimed to see a yellow bird suckling between Martha Corey’s fingers. They interrupted Hathorne’s questioning of Martha with piercing screams, and claimed that Corey was biting, scratching, or strangling them.

One of the girls, Ann Putnam, told Hathorne that she had one night seen Martha Corey praying to the Devil outside the window of the Putnam home during a family dinner. Based on the girls’ testimony, Martha was sent to the Salem jail to await trial.

Several days later, Abigail Hobbs confessed to being a witch and named Giles and Martha Corey fellow witches of that “infernal congregation.” Ann Putnam claimed that the specter of Giles Corey visited her and asked her to write in the Devil’s book.

A warrant was issued for the arrest of Giles Corey on April 19, 1692, and was examined on the charge of witchcraft. When asked to make his plea, Giles stood mute. In those times, people who refused to take a plea would have weights placed upon their chest. More weights would continue to be placed until the person either gave a plea or was crushed to death. The Coreys were ordered to be held in jail until dates could be set for their trials

The Trials
Martha Corey was tried in September 1692. Several people came to court to testify against her as a witch. Elizabeth Booth testified against both Giles and Martha Corey. She testified that Giles had appeared before her at the widow Shaflin’s house, and had tried to get them to eat bread and drink wine that he had brought, and that when they refused, he had afflicted them and tormented them.

On September 10, 1692, Martha was convicted of witchcraft.

The Executions
On Monday, September 19, Giles Corey was stripped naked, a board placed upon his chest, and then, while his neighbors watched, heavy stones and rocks were piled on top of the board. It was a punishment never before seen – or ever again inflicted – in the colony of Massachusetts. Corey pleaded to have more weight added, so that his death might come quickly. He was eventually crushed to death at the age of eighty. Judge Jonathan Corwin ordered Corey buried in an unmarked grave on Gallows Hill.

On September 22, 1692 Martha Corey was hanged on Gallows Hill along with seven other Salem Witch Trial victims — five women and two men. It would take until 1954 for Martha Corey’s name to be officially cleared, and for her to be absolved of her crimes.