Confederate Nurse at the Battle of New Market

Eliza Clinedinst Crim was a young woman living in New Market, Virginia at the time of the Battle of New Market in the Shenandoah Valley on May 15, 1864. Following the long Sunday fight, several of the VMI cadets were taken to Crim’s home, where she fed and cared for them. Crim continued a correspondence with many of the cadets she first met in the aftermath of the battle and became known as the Mother of the New Market Cadets.

Image: Tinted copy of a photo taken circa 1864

Summary of the Battle of New Market:
As a part of his spring offensive, General Ulysses S. Grant ordered Federal General Franz Sigel to move south through the Shenandoah Valley toward the town of Staunton, where he hoped to cut the Virginia Central Railroad, and thus deprive General Robert E. Lee’s army and Richmond of one of their chief sources of supply.

The only Confederate force in the Valley was that of General J. D. Imboden, consisting of cavalry, mounted infantry and a battery of six guns – about 1,500 men in all. When Imboden heard of Sigel’s advance, about May 2nd, he notified the Superintendent of the Virginia Military Institute in Lexington, Virginia to hold the Corps of Cadets in readiness to reinforce his little army.

The Valley of Virginia was then in the military department of General John C. Breckinridge who was then in Southwest Virginia. He immediately assumed command of the Confederate forces for the defense of the Valley and on May 10 ordered the Corps of Cadets to join his troops at Staunton, some 80 miles north.

Sigel and Breckinridge’s forces met near New Market on May 15, 1864. Though they had marched 80 miles in four days to join his army, Breckinridge hoped to avoid using the cadets as they were eighteen or under, some as young as 15. But when a gap opened in his line, Breckinridge, with great reluctance, ordered the VMI cadets forward to close the breach.

Fighting with Breckinridge’s seasoned veterans, the cadets were able to repel the Union thrust. With Sigel’s attack faltering, Breckinridge ordered his entire line forward. Surging through the mud with the cadets in the lead, the Confederates assaulted Sigel’s position, breaking his line and forcing his men from the field. Sigel withdrew to Strasburg and effectively left the Valley in Confederate hands. During the fighting, ten VMI cadets were killed or mortally wounded.

Eliza Crim, a tinsmith’s wife, later wrote to a friend:

This was the first time I ever saw the Virginia Military Cadets. I will never forget those brave boy soldiers as they ran down the hill to victory and death.

They commenced carrying the dead from the field as the cadets passed on down the road. They carried some of them by our door. I could not stay in after I saw this. I ran on down to the battle field to help with the wounded. I was the first woman to go there. Some came afterwards and did noble work. O, what a sickening sight after the battle.

I stayed up all night to help the wounded. A cold rain was falling and so many shivered with such severe chills. We helped to carry the wounded into the old Rice home. We made a fire and gave them warm drinks; but many died that night. Our poor soldiers, how they suffered and died that day!

I left the field to come home to make tea for the wounded. On my way up I met the poor little boy soldiers of the Virginia Military Institute. One cadet wanted to borrow an ax to cut wood to make a fire and get supper. They were too proud to beg. I took them in and gave them their supper. One said he was fifteen years old. He wanted his bread spread with preserves. He sat down just like a little child to eat from mother’s hand.

I returned to the battle field with the hot tea, and on my way down I met many cadets coming into town. Nearly all were barefooted. They lost their shoes in the mud as they ran through a plowed field, and all were so hungry and tired.

They told me about a poor little cadet lying down at the Lightfoot farm, badly wounded. I told them to bring him up to my home, where he would be more comfortable. He laid there all night, but in the morning after the battle, Moses Ezekiel brought him to my home in an ambulance and carried him in.

My good old mother put him in her own bed, as it was the only bed we had downstairs. When we laid him down he looked up at me, and said: “Sister, what a good, soft bed.” Mother had an old-time feather bed, and it must have felt soft to him after lying on the hard ground.

This sweet little cadet was from Amelia County, Va. His name was Thomas Garland Jefferson. He was about sixteen years of age, was blue-eyed, and had golden hair. I will never forget him and his sweet, boyish face. He was shot in the breast, and the bullet was cut out of his back. His sufferings were intense, but he bore up so well and never complained. Cadet Ezekiel nursed him very tenderly. His own mother could not have done more for him

When Cadet Jefferson fell, two of his comrades hastened to his aid. Indifferent to his own comfort, with outstretched hand he pointed to the front, saying: “That is the place for you; you can do me no good.” He urged them to the front, saying words which should be immortal.

The evening before he died, he called Cadet Ezekiel to read for him. He read the fourteenth chapter of St. John: “Let not your heart be troubled. Ye believe in God, believe also in me. In my Father’s house are many mansions. I go to prepare a place for you.”

I went to smooth his pillow, and he said: “Sister, what beautiful hands.” He called, “Duncan, come and light a candle; it is growing dark.” The blindness of death came over him. He died about midnight in Moses Ezekiel’s arms. He was buried in the old churchyard where they fought so bravely. 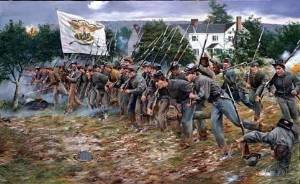 John Wayland’s book A History of Shenandoah County Virginia describes Eliza Crim as one of “those women who are most worthy of honor, because their work is usually done in quiet ways, without the ostentation and noise that usually follow prominent men.”

Last fortnight, aged 94, died Mrs. Eliza Clinedinst Crim, “Mother of the V. M. I. Cadets,” friend of Sculptor Moses Ezekiel who, during the Battle of New Market, carried a dying comrade into her house to be nursed. Her description of the battle: “I saw the terrible shells explode, right in front of the line of cadets, as they charged down Shirley’s Hill. The deadly fire cut gaps in their line, but they closed up and without faltering they moved to victory and to death.”

The flag-draped casket of Mother Crim was carried to its resting place by VMI cadets.

An impressive ceremony, still a part of VMI life today, celebrates May 15 on the Lexington campus. As the names of the New Market casualties are called, selected cadets at roll call snap their replies: “Dead on the field of honor, sir.”