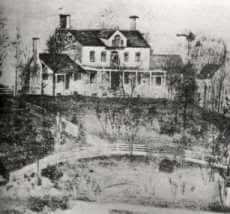 Lucy Buck from Front Royal, Virginia kept a diary of the events she witnessed from December 1861 to April 1865. Her diary entries describe daily life at her home with an extended family that included parents, a grandmother, aunts, cousins, younger siblings and visitors.

Image: Bel Air, the home of Lucy Buck
As taken from a sketch made in 1860
From her diary, Sad Earth, Sweet Heaven

Early Years
Lucy Rebecca Buck was born on September 25, 1842, in Warren County, Virginia, the third of thirteen children. She learned the social graces at two local schools. Lucy was 18 years old when the Civil War began, and she lived with her family in Front Royal, Virginia, throughout the war.

Built in 1795 by Captain Thomas Buck, Bel Air was the ancestral home of Lucy’s parents, William and Elizabeth Buck. William was a merchant and a leading citizen of Front Royal. His great grandfather was one of the first settlers in that part of the Shenandoah Valley. Bel Air is located on an elevation a quarter mile east of town. The front of the house faces southward toward the town and beyond it the beautiful panorama of the Blue Ridge Mountains.

Lucy’s life was centered around the domestic routines of a large household. Her daily life was comprised of reading, sewing, visiting and tutoring her younger brothers. Numerous friends and relatives were received regularly at Bel Air.

Civil War
Two of Lucy’s brothers, Alvin and Irving, were serving with the Confederate army. On Christmas morning, 1861, Lucy wrote:

I cannot but feel a little sad this morning for my thoughts continually revert to those dear absent brothers who were wont to share our Christmas cheer and gladden the hours of this festive season for us. When I think of the unexpected changes that have occurred in the last year, I feel as if I could not count upon ever having them with us again as of yore with any degree of certainty.

As the war moved closer to Front Royal, Lucy and her family were exposed to menacing raids by Northern troops. Her writings indicate that she was challenged to maintain the everyday pattern of family life during that difficult period. In January 1861, Lucy details the occupation of Front Royal by the Union army under the command of General Nathan Kimball. General Kimball established his headquarters at Bel Air, and his troops were quartered in the meadows surrounding the house.

In the spring of 1862, Union forces under Colonel John Kenly occupied Front Royal. In mid-May, southern spy Belle Boyd overheard Union officers discussing plans to remove all but about a thousand Union troops for other assignments.

Front Royal was located in a strategic area of the Shenandoah Valley, and control of the town changed frequently throughout the war. The area’s strategic location, its abundant agriculture, and key rail line were recognized by General Thomas (Stonewall) Jackson as a key to the success of his planned Valley Campaign.

General Banks, commander of Union troops in the Shenandoah Valley, was laying in wait in nearby Strasburg for Jackson’s army to advance from Harrisonburg via The Valley Pike. Jackson, acting on Miss Boyd’s information, led his twelve-mile column over New Market Gap, some thirty miles south of Strasburg, and down through the valley to Front Royal.

Jackson literally caught the Union forces sleeping. The ensuing battle resulted in the defeat of Colonel Kenly’s force and the outflanking of Banks as Jackson proceeded toward Winchester and the capture of many needed supplies.

The most significant change in the family’s routine occurred in the middle of 1863:

Ma told me that the servants (household slaves) had all left in the night and carried our three horses with them. Laura and I went to milk the cows while Ma, Grandma, and Nellie cleaned the house, got the breakfast, and dressed the children.

Lucy and her sisters suddenly had to deal with household chores for the first time, but servants from neighboring households came to help them through the ordeal.

Lucy and General Lee
On July 22, 1863, as the Army of Northern Virginia marched through Front Royal on its retreat from Gettysburg, Lucy’s father, William Buck, met General Robert E. Lee and his staff at the pontoon bridges over the Shenandoah River, and invited them to Bel Air for refreshment. General Lee accepted the invitation.

Lucy Buck wrote in her diary how the officers arrived to “stretch their cramped limbs and drink fresh buttermilk. I shall never forget the grand old chief as he stood on the porch surrounded by his officers; a tall commanding figure clad in dusty travel-stained gray but with a courtly dignified bearing.” At Lee’s request, Lucy and her sister played and sang Southern songs while he stood by the piano.

After the war, when Lee was president of Washington College in Lexington, Lucy wrote to request a personal memento, he responded with a kind note enclosing a uniform button that he said had “accompanied him in all his Virginia campaigns.” the note and the button are on display at the Warren Rifles Confederate Museum on Chester Street.

The End
In spite of the hotly contested actions going on literally in their front yard and the loss of their slaves, Lucy and her family emerged from the war virtually unscathed. From her diary, we learn the titles of all the popular novels Lucy read during the period and all the parlor games the young people played for an evening’s entertainment. Sometimes the guests in the family parlor wore blue – on those occasions Lucy sulked in her room.

Lucy Rebecca Buck, fervent supporter of the Confederacy that she was, was grieved by the final defeat of the Southern army in 1865.

Lucy Rebecca Buck died on August 20, 1918, and was buried at Prospect Hill Cemetery in Front Royal. Her Civil War diary was published as Sad Earth, Sweet Heaven in 1973.