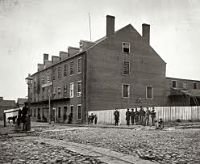 Cousins Mary and Mollie Bell, aliases Bob Martin and Tom Parker, were adolescent farm girls from Virginia. After their uncle left to join the Union army, the girls decided to conceal their sex and enlist in a cavalry regiment under the command of Confederate General Jubal Early.

Image: Castle Thunder in Richmond, Virginia,
where the Bells were held for illegally
enlisting in the Confederate army

The Bells served for two years, and earned the respect of their comrades for their bravery. Mary was promoted to the rank of Sergeant, and Mollie to the rank of Corporal. The girls hid their true identity with the help of their captain, but he was captured in 1864, and the Bells made the mistake of telling their secret to a lieutenant, who told General Early.

The sisters were falsely accused of being prostitutes, briefly imprisoned, and later sent home, still in uniform. Although their comrades attested that the Bells had served their country well, their commanding officer called them common camp followers. The news of their discovery appeared in the Richmond Daily Examiner in very malicious terms.

But the report in the Richmond Dispatch was much kinder:

The Central cars, on Friday night, brought down two girls, named Mary Bell and Mollie Bell, who were dressed in soldier clothes. They claim to be cousins, and state that before the war they lived with their uncle in Southwestern Virginia; but about two years since he left them and went over to the Yankees.

They then attired themselves in male apparel and were admitted into a cavalry company, attached to the Confederate service. A few months after their enlistment they encountered a force of Yankees, were defeated and captured with the rest of the company; but subsequently, General John H. Morgan, with reinforcements, overtook the Yankees who had them in charge, causing such a precipitate retreat that they were compelled to abandon their prisoners.

After three months’ service in the cavalry, they joined the Thirty-sixth Virginia infantry, and have been with it up to the present time. On one occasion Mollie killed three Yankees while on picket, and on her return to the brigade was promoted for gallantry to corporalcy. The corporal has missed but one battle—that of Cedar creek—she having been sent off on duty at the time. Once she was slightly wounded in the arm by a piece of shell.

From the time these girls entered the service up to the day of the fight which took place between Early and Sheridan on the 19th instant, the secret of their sex was only known to the captain of the company to which they belonged. At this battle he was taken prisoner, and they then, finding it necessary to have some protector confided their secret to the lieutenant commanding the company; but he did not keep it two days before he reported it to General Early himself, who ordered them to be taken to Richmond.

In the interview with the General, which ensued in consequence of the information imparted to him by said lieutenant, Mollie stated that there were six other females in disguise in the army; but she refused to tell who or where they were.

These girls were known in the army by the names of Tom Parker and Bob Morgan, and were acknowledged by all the soldiers with whom they were associated to be valiant soldiers, having never been known to straggle or shirk duty.

As they appeared in the Chief-of-Police office on Friday night, there was nothing in their appearance to excite suspicion that they were other than what they appeared to be, Confederate soldiers. They are modest in demeanor, and were always known as quiet and orderly members of their command.

Mollie, alias Bob Morgan, did most of the talking and displayed evident marks of education and refinement; Mary, alias Tom Parker, was taciturn and moody, but yet not altogether uninteresting. Mollie says that “Tom” as she called her cousin was never intended to be a soldier; she is too modest and backward. They were both committed to Castle Thunder to await further arrangements for their welfare.

In late November 1864, Mary and Mollie Bell were released from Castle Thunder. No charges would be brought against them. They were no longer enlisted men, and were sent back to their home in Southwest Virginia in the same uniforms they had been arrested in. The Examiner described it as “sending home the petticoat soldiers.”