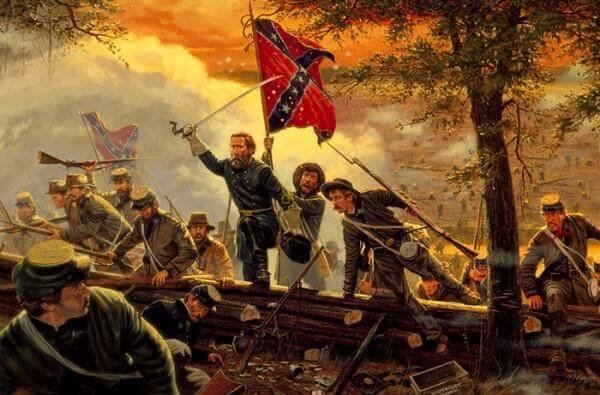 McClellan Threatens Richmond
In early April 1862, USA General George B. McClellan‘s Army of the Potomac landed at the tip of the Virginia Peninsula between the York and James Rivers. This force of more than 100,000 Union soldiers then fought its way up the Virginia peninsula. McClellan planned to capture the capital of the Confederacy and perhaps end the war. By mid-May they had reached the outskirts of Richmond.

Lee in Command
When CSA General Joseph E. Johnston was severely wounded at the Battle of Seven Pines on June 1, 1862, General Robert E. Lee assumed command of the Army of Northern Virginia. Soon after, Lee moved most of his army north of the Chickahominy River. By early June 1862, the Army of the Potomac was just miles from the Confederate capital of Richmond.

Learning that General Stonewall Jackson‘s was on his way to reinforce Lee, McClellan feared he would be overpowered by a larger Confederate force. The Union general decided to abandon his plan to capture the Confederate capital of Richmond and retreat to the James River.

Battle of Gaines’ Mill
On June 27, 1862, at the Battle of Gaines’ Mill, General Lee attacked an isolated part of McClellan’s army under General Fitz John Porter on the right of the Union line. The commanding general deployed Porter’s V Corps in an arc of one and one-half miles with its back to the Chickahominy. Their orders were to hold off the Confederates until the balance of McClellan’s force began their movement toward the James.

Largest Charge of the War
At 7 pm, precious little daylight remained when General Robert E. Lee ordered his entire force of between 30,000 and 50,000 men to make a coordinated assault against the Union position along a two-mile front. 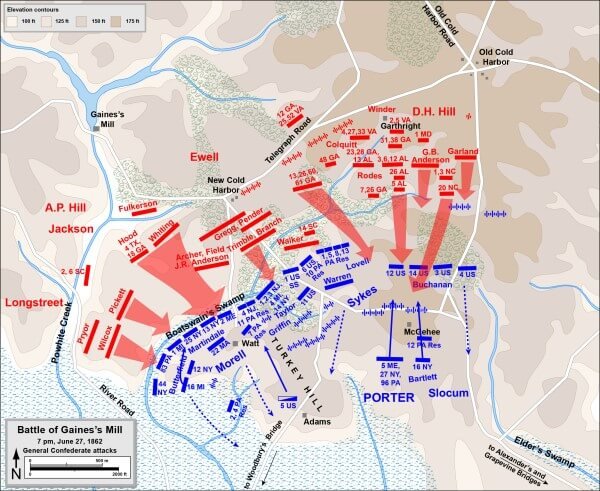 Image: Gaines’ Mill Battle Map showing Hood’s attack near the center of the Union line; section in yellow is a portion of the 285-acre tract that the Civil War Trust has been working to preserve since 2011.

The aggressive CSA General John Bell Hood spearheaded the attack with the famed Texas Brigade. Considered by many to be the toughest fighting brigade in the Army of Northern Virginia, the 1st Texas, 4th Texas, 5th Texas, 18th Georgia, and General Wade Hampton’s South Carolina Legion led the charge that broke the Union line.

In a simultaneous movement, Confederate forces carried the Union position before nightfall and sealed the Rebel victory at Gaines’ Mill. The Federals retreated across the river during the night.

While not the most organized affair, this assault was likely the largest of the Civil War. By comparison, Pickett’s Charge at the Battle of Gettysburg in July 1863 consisted of roughly 12,500 men; General Hood was involved in another charge in December 1864 at Franklin, Tennessee with 20,000 troops.