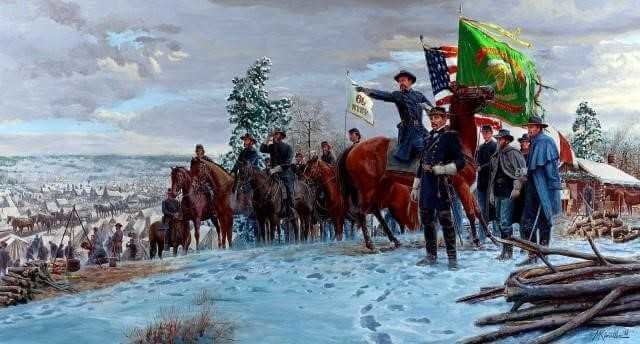 A Regiment in the Famous Irish Brigade

When the Civil War broke out, thousands of Irishmen joined the Union Army. Three all-Irish infantry regiments were raised in New York City, and these units would become the core of the Irish Brigade: the 63rd, 69th, and 88th Infantry Regiments, New York State Volunteers. Confederate General Robert E. Lee gave them the nickname ‘Fighting 69th’; that designation continued in later wars.

Fighting 69th, the Paintings
In 1991, artist Mort Kunstler had accepted a commission from the U.S. Army War College to paint Raise the Colors and Follow Me!, which shows General Thomas Francis Meagher and the Irish Brigade charging the Sunken Road at Antietam. Kunstler made these comments about his painting, Fighting 69th:

I painted The Fighting 69th [which also included General Meagher] because so many people asked for it. For this Irish Brigade picture, I selected a Fredericksburg scene.

The Federal army arrived on the north side of the Rappahannock River across from Fredericksburg on November 17, 1862. The men believed there would be no more fighting that year and began building winter quarters on November 29th, and since I enjoy painting snow scenes, I knew the picture had to take place sometime after this date.

I planned to feature the famous 69th New York but the regiment had no green flag [to signify that they were part of the Irish Brigade] during the battle of Fredericksburg. Tattered and torn from previous fighting, it had been returned to New York to be replaced. Happily, I found that the colors were not retired until December 2nd, so the distinctive and colorful flag would still be present in my painting.

I contacted Dr. James I. Robertson, Jr. at Virginia Tech for weather conditions and learned there was a clearing and warning trend that day. The color guard and officers of the 69th arrived at the Brigade headquarters of General Meagher for the official return of the colors. [In the painting] Colonel Robert Nugent points out to General Meagher [standing right center] the spot where the long-awaited pontoons, which arrived on November 26th, have been placed. [Pontoon boats were joined together to form bridges where none were available.] …

The 69th New York’s green regimental flag still exists today, as do the ribbons. The tears and bullet holes are based on the actual flag. An interesting note is that it says 1st regiment on the flag and not the 69th because the 69th NY was the first regiment of the Irish Brigade. The white and red headquarters flag [far right center] shows it to be the flag of the 2nd Brigade, 1st Division, 2nd Corps, according to General Order 102 of the Army of the Potomac of 24th March 1862. The white marker with the 69th NYSV also still exists.

These tattered remnants of Irish valor, the regimental colors, were returned to New York and replaced in a formal ceremony with new flags. The brigade’s carpenters built a large log hall in their winter encampment to hold the festivities which were scheduled for December 13th. General [Ambrose] Burnside had other plans. The battle started that day, and the Irish Brigade made the deadly assault on Marye’s Heights with green sprigs of boxwood in their hats in place of the missing flags.

At the First Battle of Bull Run, the 69th served under the command of Colonel William Tecumseh Sherman and was one of the few Union regiments to retain cohesion after the defeat. The 69th served as the rear guard during the disorganized retreat toward Washington.

After First Bull Run, Captain Thomas Francis Meagher of Company K applied to have the 69th New York Volunteer Militia reorganized as the core unit of a larger brigade composed predominantly of Irish immigrants. His request was approved, and the Irish Brigade was formed. Meagher was promoted to brigadier general and designated the brigade’s commander. The Fighting 69th became the first regiment of the Irish Brigade, and it fought in most of the major battles of the Civil War.

The 13th day of December 1862 will be a day long remembered in American history. At Fredericksburg, Virginia, thousands of men fought and died on one of the bloodiest battlefields of the American Civil War. One of the most brilliant stories of that day was written by a band of 1200 men who went into battle wearing a green sprig in their hats. They bore a proud heritage and a special courage, given to those who had long fought for the cause of freedom. I am referring, of course, to the Irish Brigade. General Robert E. Lee, the great military leader of the Southern Confederate Forces, said of this group of men after the battle, “The gallant stand which this bold brigade made on the heights of Fredericksburg is well known. Never were men so brave. They ennobled their race by their splendid gallantry on that desperate occasion. Their brilliant though hopeless assaults on our lines excited the hearty applause of our officers and soldiers.”

Of the 1200 men who took part in that assault, 280 survived the battle. The Irish Brigade was led into battle on that occasion by Brigadier General Thomas F. Meagher. … In the fall of 1862, after serving with distinction and gallantry in some of the toughest fighting of this most bloody struggle, the Irish Brigade was presented with a new set of flags. In the city ceremony, the city chamberlain gave them the motto, “The Union, our Country, and Ireland forever.” Their old ones having been torn to shreds in previous battles, Capt. Richard McGee took possession of these flags on December 2nd in New York City and arrived with them at the Battle of Fredericksburg and carried them in the battle. Today, in recognition of what these gallant Irishmen and what millions of other Irish have done for my country, and through the generosity of the “Fighting 69th,” I would like to present one of these flags to the people of Ireland.