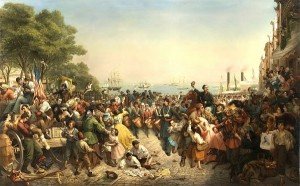 Elizabeth Townsend was born in New York September 20, 1830, the daughter of Peter and Caroline Parish Townsend of Monroe, New York. Thomas Francis Meagher, born in Ireland August 3, 1823, was an Irish nationalist, an American politician and a Union Army general during the Civil War. In his younger years he was an Irish revolutionary, fighting for Ireland’s independence from British rule.

He was known as ‘Meagher of the Sword’ due to his fiery revolutionary speeches. In 1848, Thomas Meagher, an Irish patriot, was convicted of sedition for urging armed rebellion against the British. Meagher was sentenced to be hanged, drawn and quartered, but his sentence was commuted by Queen Victoria and he was sent to the penal colony in Australia. In 1852, he escaped and came to America.

Meagher arrived in New York City in May 1852, where he studied journalism and law. He became a U.S. citizen, and some time later founded a weekly newspaper called the Irish News. He joined John Mitchell in the publication of the radical anti-British newspaper The Citizen.

After the death of his first wife in Ireland, the handsome and eloquent Meagher courted Elizabeth Townsend, daughter of a wealthy New York businessman who tore up his will when he learned of his daughter’s intention to marry the firebrand Meagher. Nonetheless, they were married.

Elizabeth Townsend married Thomas Meagher on November 10, 1855. The Townsend family were wealthy Protestants, who did not approve of Meagher marrying their daughter. Eventually, the family relented and Elizabeth converted to Catholicism before marrying Meagher.

During this time, prior to the American Civil War, Meagher traveled to Costa Rica, in part to determine whether Central America would be suitable for Irish immigration, and also to write travel articles for Harper’s Magazine. He was also a captain in the New York State Militia.

Meagher in the Civil War
On April 12, 1861, the first shots were fired at U.S. held Fort Sumter in Charleston, South Carolina. This action by the South pushed Meagher into support of the Union cause. In lectures, he implored the Irish of the North to defend the Union. He also began recruiting to form Company K of the 69th Regiment of the New York State Militia.

Meagher then returned to New York to recruit a new unit. His persuasive talents eventually led to the creation of the Irish Brigade: the 63rd, 69th and 88th New York regiments. The brigade later included the 28th Massachusetts and the 116th Pennsylvania. In camp near Alexandria, Meagher and the Irish Brigade attained instant notoriety. The troops were well-drilled and finely turned out – but sometimes rambunctious and fond of their whiskey.

With the rank of brigadier general, Meagher led the Irish Brigade of the Army of the Potomac in the Peninsula Campaign of 1862. Their first action was at the Battle of Fair Oaks, the culmination of an advance up the Virginia peninsula, led by General George B. McClellan. The Union was defeated at that battle, but the Irish Brigade developed a reputation as fierce fighters, with Meagher leading all attacks from the front, saber in hand.

What would be described as the highlight of his military career was the Battle of Gaines Mill in Hanover County, Virginia, on June 27, 1862. This action took place after a forced march across the Chickahominy River to reinforce Fitz John Porter and his forces. Meagher’s men helped repulse many enemy attacks, inflicting more than 3,000 casualties – less than 440 Union soldiers lost their lives.

Porter’s force, which held the North flank, had established a good defensive position. However, a well-coordinated enemy attack at dusk broke the Union lines, forcing Porter’s men to retreat. It was here that Meagher and the Irish Brigade excelled, covering the retreat.

At the Battle of Antietam on September 17, 1862, General Meagher and the Irish Brigade achieved immortality. The brigade lost 540 men as they charged down the Sunken Road before they were ordered to withdraw. Meagher either fell off his horse, or the animal was shot from under him. There was an accusation he was drunk, which McClellan denied. The high number of casualties, and the rumors of being drunk on the battlefield, led to increased criticism of Meagher’s ability to command.

Worse was to come at the Battle of Fredericksburg, where Meagher led 1,200 men into battle – only 280 survived. Meagher was also wounded when he was hit in the leg by a cannonball, and spent the next four months recuperating. He took charge of his command three days prior to the Battle of Chancellorsville, where he saw limited engagement.

After Chancellorsville, Meagher intended to return to New York to raise reinforcements for his battered brigade. Army leaders, including Secretary of War Edwin Stanton and General Henry Halleck, refused. They needed Meagher and his men in the field. The hot-tempered Meagher resigned on May 14, 1863, and the Irish Brigade continued toward Gettysburg without him. It was an impetuous act, but not completely out of character for Meagher. 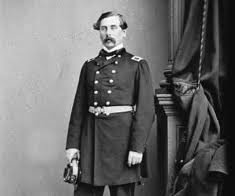 Meagher sat out the war after May 1863 until he was reinstated at the end of 1864. He actively campaigned for President Abraham Lincoln and Vice President Andrew Johnson during the 1864 election. His military glory days, however, were over.

Meagher’s resignation from the army was rescinded, and he was assigned to duty in the Western Theater beginning in September 1864. He commanded the District of Etowah from November 29, 1864, to January 5, 1865. Meagher briefly commanded a provisional division within the Army of the Ohio from February 9–25, and resigned from the U.S. Army on May 15, 1865.

Territorial Governor of Montana
After the war ended and Lincoln was assassinated, Andrew Johnson appointed Meagher Secretary of the new Territory of Montana, and soon after arriving there he was designated as Acting Governor. In this office Meagher attempted to create a working relationship between the territory’s Republican executive and judicial branches, and the Democratic legislative branch. He failed, making enemies in both camps, and angered many when he reprieved a fellow Irishman who had been convicted of manslaughter.

Meagher gained further unpopularity when a militia he formed to locate Sioux Indians responsible for a series of attacks and deaths on white settlers failed miserably. He defended freed black slaves, which put him in conflict with the Ku Klux Klan. He was accused of being too honest and of not being diplomatic enough for his position. He called a convention to develop a constitution as a step towards statehood. However, not enough people supported him.

Elizabeth Meagher was 36 years of age when she arrived on the Montana frontier. She had married the brilliant, but unpredictable, Irish exile in New York and often served as his secretary and nurse. She first arrived at Fort Benton June 5, 1866, aboard the sternwheeler Ontario in the company of her husband who had gone downriver from Benton to meet her.

The June 16th Helena Radiator announced, “The Acting Governor, General Thomas Francis Meagher arrived from Benton, with his better half, on yesterday. We welcome her to her new Mountain home, and may she find in it, all that her heart desires.” After several weeks in Helena, Elizabeth and her husband moved on to Virginia City, the territorial capital, where their small log home became a social center there.

Disappearance on the Missouri
By the spring of 1867, the acting governor faced an expanding settler population and a perceived threat from Indian tribes. His calls for federal troops were answered by a modest shipment of arms and ammunition sent by General William Tecumseh Sherman for use by the Montana Militia.

Meagher departed Virginia City about June 17 and spent several days in Helena, leaving for Fort Benton on June 22 to receive the shipment of arms. On the way to Fort Benton, Meagher became very ill, apparently from dysentery, and stopped six days en route to recuperate.

After arriving at Fort Benton, Meagher was taken to the steamboat G. A. Thompson for his own safety after rumors circulated of a plan to kill him. He was drinking and playing cards with three friends, and decided to go to bed about 11 pm on July 1, 1867.

Shortly thereafter, General Meagher fell overboard into the Missouri River. Crewman Jim Freeman was on watch in the wheelhouse, and the ‘man overboard’ cry was heard, as someone dashed across deck and plunged into the Missouri River. A search failed to cast any light on what happened or locate whoever went overboard. A search of the boat discovered that Meagher was not in his cabin and the porthole was open.

The steamboat pilot described the river as “…instant death – water twelve feet deep and rushing at the rate of ten miles an hour.” Meagher’s body was never found, and his death is considered by some to be suspicious. He was outspoken, and there were many who might have wanted him dead. Some state that he was drunk and simply fell overboard. Others suggest that he may have been murdered by Montana political enemies.

For nearly two months after the death of her husband, the grief-stricken daughter of wealthy old Peter Townsend pathetically patrolled the tawny banks of the Missouri, searching for her husband’s body… When fall came to Montana that year, she reluctantly abandoned the search and returned to New York.

Elizabeth Meagher made her final departure from Virginia City on August 12, 1867, to return to her father’s home in New York. The Montana Post announced:

Mrs. General Meagher left yesterday per private conveyance for Benton, thence by river for the East. It was with sincere regret our citizens bid good-bye to this most estimable lady, and her friends in Montana will ever cherish her memory fondly. Quite a number of the citizens turned out in Nevada and formed an escort of honor, while overhead the twin flags of Erin and Columbia floated out on the breeze.

In 1913, a man named Pat Miller claimed to have shot Meagher and pushed his body out the porthole, before escaping by jumping overboard and swimming to shore. He maintained he was paid $4,000 by a man called Axel Porter on behalf of vigilantes who wanted Meagher killed. A few days later, he withdrew his confession, but the detail was so accurate it was impossible to discount.

Elizabeth Townsend Meagher died in New York July 5, 1906, and was buried at Green-Wood Cemetery in Brooklyn, New York. Though his body was never found a gravestone for General Meagher was placed next to hers in 2008.

The U.S. Army established a post near Rocky Creek, east of Bozeman, Montana, and named it Fort Elizabeth Meagher. Thomas Meagher is remembered for his service to Montana by a statue on the front lawn of the Capitol grounds in Helena.