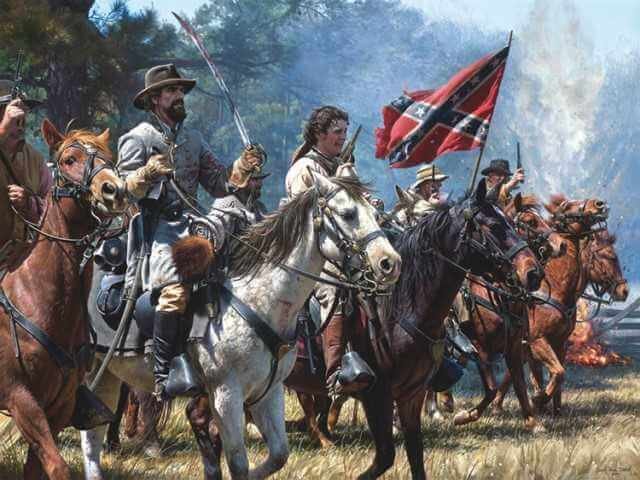 Cavalry Battle in the Mississippi Backwoods

Standing at six feet two inches tall, broad-shouldered, athletic and powerful, General Nathan Bedford Forrest towered over most men of his era. As his personal weapons, Forrest carried a Colt 36 caliber revolver and an 1840 model cavalry saber, which he sharpened to a razor’s edge. Forrest did not send men into battle; he led them.

Backstory
In late January 1864, General Ulysses S. Grant sent General William Tecumseh Sherman with 20,000 troops to Meridian, Mississippi, an important railroad center. On February 1, Grant ordered seven thousand cavalry under General William Sooy Smith to leave Memphis, Tennessee and rendezvous with Sherman at Meridian on February 10. The two forces were to spread devastation through the heart of the South.

While Sherman feinted his way towards Meridian to throw off Confederate forces, Smith disobeyed orders and delayed his own advance for ten days before leaving on February 11. His men moved unopposed through the countryside, destroying railroads and crops as well as picking up 1,000 slaves. On February 18 he drove a Confederate force from West Point, still ninety miles from Meridian.

On February 20 Sherman left his position in Meridian and returned to Vicksburg, fearing for Smith’s whereabouts. Smith, hearing of this, turned about and headed for Okolona. Smith was concerned about the size of the Confederate forces the safety of the slaves who had fled to his army if they were captured. Colonel Jeffrey Forrest and his brigade of CSA cavalry lured Smith into the swampy area around the Tombigbee River, and Smith was forced again to retreat.

General Smith was now left alone to deal with Colonel Forrest’s older brother, the venerated General Nathan Bedford Forrest. On the 21st, as they withdrew towards Okolona, Smith’s rear guard intermittently engaged Forrest and his escort troopers. When Smith and his cavalrymen turned to face their pursuers, Forrest and his escort passed to the flank and rear of the Federals causing them to flee.

At nightfall Forrest allowed his troops to rest a few hours, giving time for his other brigades to catch up. Smith pushed his retreat until near midnight and encamped near Okolona.

Battle of Okolona
By four in the morning of February 22, General Forrest had roused his sleep-deprived troopers and was on the move again. Smith’s troops had dismounted and threw up barricades around their positions. Forrest led the first attack at dawn on the prairie south of Okolona.

During the battle, General Forrest saw his younger brother Colonel Jeffrey Forrest fall as he was leading a charge at the head of his brigade. The general rode quickly to the site and found his brother had been killed instantly by a shot to the neck. After a few minutes with his brother, Forrest mounted his horse and ordered his entire command to prepare for frontal assault and flank attacks.

Waving his saber in the air, General Forrest charged into the Federal position at full speed. When the Federal line gave way, the combatants engaged in some of the most bloody hand to hand combat of the war. Three more Union cavalrymen were killed by Forrest’s saber. An artillery explosion brought down General Forrest’s horse, as well as a second horse. Finally, Forrest called for his famous gray war horse King Philip.

General Nathan Bedford Forrest’s attacks cut gaps in the Union battle lines. During the general retreat that followed, the Northerners began an eleven-mile running battle as they withdrew, falling back through a series of defensive positions including plantations and roadblocks. Towards the end of the day, the Union forces formed into three lines of battle and charged the Confederates, who used volley fire to disrupt both charges at a range of forty yards. Facing such defeat, Smith began a further withdrawal. Forrest quickly ordered the end of the pursuit due to lack of ammunition.

General William Sooy Smith limped over the state line to Tennessee on February 26 with the remainder of his forces. There he was reprimanded for disobeying his initial orders to start out for Meridian on February 1 and for the failure of Sherman’s Meridian Expedition. Due to failing health Smith left the military in September 1864 and returned to civilian life.