Alice Kirk, daughter of John and Susan (Bingham) Kirk, was born at Youngstown, Ohio, on May 3, 1828, the oldest of thirteen children. Alice’s father, a well-to-do merchant and real estate developer, was an abolitionist who participated in the Underground Railroad. Alice had the advantage of a good education at a female academy, and taught school in her hometown, as well as in Indiana and Illinois.

Benjamin Henry Grierson was born on July 8, 1826 in Pittsburgh, Pennsylvania, second son of Mary and Robert Grierson. At the age of eight, he was kicked by a hore and nearly killed, an incident that left him afraid of horses, and an unlikely candidate for a cavalry officer. In 1829, the Grierson family moved to Youngstown, Ohio, where Benjamin attended common school. At age thirteen, he was chosen leader of the Youngstown band. After being educated in Ohio, Grierson moved to Jacksonville, Illinois, where he became a music teacher and band leader.

Alice Kirk married Benjamin Grierson on September 24, 1854, despite her father’s objections and Grierson’s lack of religion. She spent the first several years of their marriage trying unsuccessfully to convert him to Christian faith. The couple lived in Jacksonville, Illinois, and had seven children; four children survived to adulthood.

The Civil War
Benjamin Grierson joined the Union Army in 1861 and rose quickly through the ranks. On October 24, 1861, he joined the Sixth Illinois Cavalry, and was engaged in a number of small skirmishes and raids on railroads and facilities in Tennessee and Mississippi that spring and summer.

Although he lacked a formal military education, Grierson became a skilled cavalry leader. In November 1862, he became a brigade commander in the Cavalry Division of the Army of the Tennessee. In December, he pursued CSA General Earl Van Dorn after his Holly Springs, Mississippi, raid against the supply lines of General Ulysses S. Grant. Because of this action, Grierson was given command of a cavalry brigade.

Grierson and his cavalrymen tore up railroads and burned crossties, freed slaves, burned Confederate storehouses, destroyed locomotives, ripped up bridges and trestles and burned buildings. They inflicted ten times the casualties they received, and the total casualties were three killed, seven wounded and nine missing.

Grierson’s Raid
In the spring of 1863, he led Grierson’s Raid through Mississippi (April 17-May 2) as a diversion from General Grant’s main attack on Vicksburg. Grierson and his 1700 men departed Tennessee on April 17, and rode over 600 miles through hostile territory – through the state of Mississippi and to Union-held Baton Rouge, Louisiana, over routes no Union soldier had traveled before.

Grierson reached hero status in the North after his famous raid. Historian John D. Winters in his book, The Civil War in Louisiana, states that Grierson’s raid “struck fear in the hearts of the citizens and somewhat demoralized the Confederate forces who failed to stop the move.” 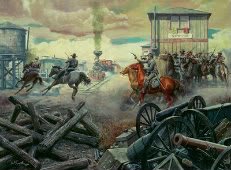 Image: Grierson’s Butternut Guerrillas
By Mort Kunstler
On the morning of April 24, 1863, a gray-clad band quietly rode into Newton Station, Mississippi. They were called the Butternut Guerrillas – Union soldiers dressed as Confederates – the advance party of General Grierson’s raiding force. They captured a train and destroyed vital supplies meant for Vicksburg. After a ride of 600 miles in 16 days, only 26 were killed, wounded or captured.

Grierson was promoted to brigadier general of volunteers in June. While ending his raid in Louisiana he was able to take part in General Nathaniel Banks’ siege of Port Hudson as commander of the XIX Corps cavalry.

In June 1864, Grierson commanded a cavalry division in the Army of the Tennessee during General William Tecumseh Sherman‘s Meridian Campaign. He was still in division command during General Samuel Sturgis’ ill-fated encounter with CSA General Nathan Bedford Forrest at the Battle of Brice’s Crossroads.

Shortly after that battle, Grierson was transferred to command the Cavalry in the District of West Tennessee. He was attached to Andrew J. Smith’s XVI Corps and fared much better against Forrest at the Battle of Tupelo.

Grierson was then assigned to the Cavalry Corps of the Army of the Mississippi, and took part in the campaign against Mobile. Before the end of the war, he organized cavalry for a projected invasion of Texas and commanded the District of Northern Alabama. On March 2, 1867, Grierson received a brevet promotion to the rank of major general for his famous raid of 1863.

In the West After the War
By war’s end, the Griersons had four children, and Alice asked Grierson to continue his military career. He received the rank of colonel in the regular army, and was made commanding officer of the 10th United States Cavalry, one of two newly formed mounted regiments composed of African American enlisted men and white officers called the Buffalo Soldiers.

This assignment made Grierson unpopular with other officers, including his superior, Philip Sheridan, because of his support for and trust in his troops. Grierson’s sympathy and courtesy toward Native American tribes also led to questions about his judgment.

From her earliest days on the frontier, Alice Grierson, unlike most officers’ wives, displayed no fear or prejudice toward the buffalo soldiers. She intervened on their behalf whenever officers or their wives mistreated the soldiers. They were at Forts Riley and Gibson (1867–69) and the District of the Indian Territory (1868–69).

Alice bore her fifth child at Fort Riley, Kansas, in 1867. Two years later, she moved from a tent at Fort Sill, Indian Territory, into the newly completed commanding officer’s quarters, shortly before her sixth child arrived. Less than two weeks later, she entertained a member of the Board of Indian Commissioners and his wife.

Grierson selected the site for Fort Sill, Oklahoma, and as commander (1869–72) supervised construction of the post. His support of the peace policy on the Kiowa-Comanche Reservation angered residents of the Texas frontier. While serving as commander of Fort Sill, he saved the life of visiting General William Tecumseh Sherman, during a confrontation with Lone Wolf, principal chief of the Kiowa.

In May 1871, Grierson arrested Indian Chiefs Satanta, Satank, and Big Tree, who had led what became known as the Warren Wagontrain Raid in North Texas. At Fort Gibson in 1872, Grierson supervised the removal of intruders from the line of the Missouri, Kansas and Texas Railroad. He then spent two years as superintendent of the Mounted Recruiting Service at St. Louis.

The difficulty of educating their children and other family responsibilities kept the Griersons apart for many months at a time. In 1871, Alice gave birth to her seventh child, a second daughter, who died at three months. By then their oldest son Charlie was living with relatives in Chicago to finish school.

Alice’s depression over her frequent pregnancies and the loss of her infant, as well as her guilt over the separation from Charlie and her inability “to harmonize public life with nursery duties,” placed her under intolerable strain. She went to Chicago to regain her mental health.

Alice subsequently returned to the frontier, where her husband’s support for President Ulysses S. Grant’s peace policy had placed him in a tense relationship with Philip Sheridan, commander of the Department of the Missouri.

In the spring of 1875, Sheridan ordered Grierson to Fort Concho, a dilapidated post on the High Plains of West Texas. Grierson was unhappy with his transfer to such a remote post and considered resigning; however, Alice advised him to stay in the army.

The seven years at Concho brought calamities. In 1877, twenty-two-year-old son Charlie had his first episode of manic-depressive psychosis while attending West Point. Ben and Alice nursed him back to health, but a year later she lost her only remaining daughter, thirteen-year-old Edith Clare, to typhoid fever.

Alice tried to keep up a cheerful front, describing herself as not “forlorn, and gloomy at any time.” Two years later, this resilient woman nursed her second son, twenty-one-year-old Robert, through his first bout with mental illness.

As commander of the District of the Pecos (1878–80), Grierson explored and mapped the Trans-Pecos, constructed wagon roads and telegraph lines, and opened West Texas to settlement and the railroads.

During the summer of 1880, Grierson defeated Victorio and ended the Indian threat to West Texas. In 1882, Grierson moved his headquarters to Fort Davis, Texas, where he greatly expanded the military facilities. He also invested heavily in land and organized a railroad-promotion company.

The Griersons, captivated by the rugged beauty of West Texas and believing in its economic potential, acquired ranches for their younger sons and planned to make Fort Davis their permanent home.

To their disappointment, however, the Geronimo campaign necessitated the Tenth’s removal to Arizona Territory in March 1885, where Grierson commanded Whipple Barracks and later Fort Grant. Alice accepted the news stoically. Now fifty-six years old, she had been following her husband from one western post to another for almost twenty years.

This move, however, would be the most difficult. Robert, the second eldest of her four sons, would remain in the Fort Davis area to manage the family’s ranch properties. Alice’s two youngest sons, Harry and George, would travel with her. Her oldest son, Charles, a second lieutenant in his father’s regiment, would be moving with the regiment.

Still Alice echoed what she had written years earlier in a letter to her husband when he first accepted a commission in the army:

I have no intention of going back to Illinois for years, if you remain in the Indian Territory. You must remember that I think the comfort of a family depends much more upon the family being together in love, than on the house they are quartered in… I am unwilling to be separated from you any longer than absolutely necessary.

Alice journeyed to Illinois to visit family and friends while her husband traveled with the regiment to Arizona Territory. In July, she and her youngest sons joined Grierson. According to Grierson, “Alice and boys seem to like Whipple Barracks quite well.” The post, which served as the regiment’s headquarters, was located at the edge of the city of Prescott.

Alice moved to Santa Fe in 1886, when Grierson became commander of the District of New Mexico (1886–88). When a persistent lameness grew worse, Alice returned to Jacksonville, Illinois, for treatment.

On August 14, 1888, Alice Kirk Grierson died of bone cancer at the age of sixty. She was buried in Jacksonville.

In November 1888, Grierson assumed command of the Department of Arizona. He was promoted to brigadier general in the United States Army on April 5, 1890, one of the few civilians who attained that rank in the regular army; he retired the following July.

In 1907, General Benjamin Grierson suffered a debilitating stroke from which he never fully recovered. He died at his summer home at Omena, Michigan, on August 31, 1911, at the age of 85. He was buried with Alice at Jacksonville.

General Grierson Days is held every year at Jacksonville, Illinois. It is the largest Civil War reenactment in the Midwest. Battles on both Saturday and Sunday feature more than 50 horses, 500 reenactors and families and several cannons.