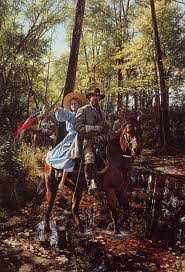 Emma Sansom was living on her family’s farm near Gadsden, Alabama in the spring of 1863. the Sansom household consisted of Emma’s widowed mother, sister Jennie, 24, brother Rufus, 22, recuperating from wounds he had received in battle, and Emma, 15. She was described as an attractive young girl, with blue eyes and auburn hair.

In April 1863, Confederate General Nathan Bedford Forrest and his cavalrymen entered northern Alabama to pursue Union General Abel Streight, who was on a raid to destroy the Confederate railroad near Chattanooga, the only source of supply and communications to General Braxton Bragg’s army in middle Tennessee.

On April 30, General Forrest caught up with the Yankees and attacked their rear guard of the Federal column, completely surprising the soldiers in blue. But before Forrest could mount a counterattack, Streight’s forces had remounted and were on the run. So began a running gun battle that would go on for 4 days, 4 nights and cover 199 miles.

After two days and nights of fighting and fleeing, Streight and his men arrived at the Sansom farmhouse just outside of Gadsden, Alabama on the morning of May 2, 1863. Soldiers dismounted and crowded around the well in the Sansom yard. They asked the women if they had any menfolk in the army, The women said they had 6, all gone to fight the Yankees. The soldiers searched the farmhouse for guns and saddles, and took Rufus prisoner.

After the soldiers had crossed Black Creek adjacent to the Sansom farm, Streight decided to destroy the bridge, hoping to hold off Forrest’s pursuit for a few hours and allow his weary men to rest. As the Sansom women watched, the Yankees set fire to the bridge, and the flames soon soared high into the air. Streight and his force set off again, heading for the safety of Rome, Georgia.

The women were still standing on the front porch, grieving for Rufus, when General Forrest arrived a short while later. Forrest asked them if there was another bridge nearby, but the closest one was at Gadsden, two miles away. Then Emma said that she knew of a place where she had seen cows cross, and she thought his men might be able to cross there.

Forrest asked Emma to get on his horse behind him and show him the way. Mrs. Sansom objected, but allowed it when the general assured her that he would bring the girl back safely. Emma led Forrest along a branch of the creek that emptied just above the lost ford and pointed out the crossing. After delivering Emma back to her mother, Forrest and his men crossed the creek, and the chase was on again.

The following day, General Forrest caught up with Streight, and tricked him into believing the Confederate force was much larger than it actually was. The Rebels surrounded Streight and his entire command, and the exhausted Union general reluctantly surrendered. However, he soon learned that his 1466 men had been captured by only 322 Confederates.

General Forrest always credited this victory to Emma Sansom. The time she saved him by directing him to the alternate crossing allowed him to continue to pursue Streight, and save the railroad so vital to the Confederacy. Emma became a heroine, especially considering that she could have been arrested by the Union Army for openly aiding the Rebels.

At its meeting in November 1863, the Alabama General Assembly donated a section of public lands and a gold medal in consideration of Emma Samson’s public service. The preamble of the resolutions declares that:

A nation’s history is not complete which does not record the names and deeds of its heroines with those of its heroes, and revolutions sometimes throw the two in such close proximity that the history of the manly bearing of the one is imperfect unless coupled with the more delicate, yet no less brilliant, achievement of the other, and such must ever be the history of the most gallant and successful victory of the intrepid Forrest, unless embellished with the name and heroic acts of Emma Sansom.

In 1907, a monument was constructed in Gadsden in Emma’s honor. On its pedestal, in Italian marble, stands a full-sized statue of Emma, with her arm outstretched to show General Forrest the way to the ford on Black Creek.

A new school built there in 1929 was named Emma Sansom High School. Though she had moved away all those years ago, the people of Gadsden never forgot her important contribution to the Lost Cause.