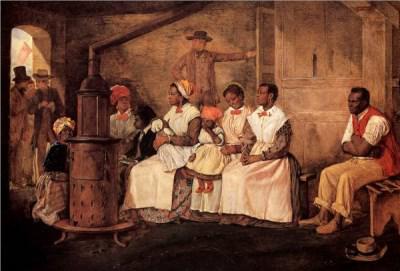 The first Africans in Virginia brought to Jamestown in 1619 were quickly purchased on the same terms as English indentured servants: after seven years of labor, they were free. By 1625, there were said to be twenty-three Africans serving in Virginia; twenty-five years later, there were 300.

Slavery in Colonial Virginia
Blacks were not automatically slaves in early Virginia. Some held property, married and raised families outside the institution of slavery. Before 1660, most slaves in Virginia lived on plantations with two or three others, and most slaves were male. Interactions with whites were common and restrictions based exclusively on race were not rigid.

Tobacco, the most lucrative crop grown in colonial Virginia, was extremely labor-intensive. During the 1660s, as plantation agriculture spread up the Potomac River, the demand for field workers exceeded the supply of indentured servants from England. The economic solution was to obtain laborers from another source – slaves from Africa imported through the Caribbean islands, as well as directly from that continent.

By the 1660s, the status of African servants had hardened into permanent servitude based on skin color. The Virginia colony revised its laws in the 1660s to establish that blacks could be kept in slavery permanently, generation after generation. Now there were slaves in Virginia and labor-starved tobacco planters wanted more. By the 1680s, the status of slave was clearer and interactions with whites were restricted.

The great increase in the slave population in Virginia began in 1700. By then the government had established a clear distinction between white and black residents, how their labor would be valued, and how their lives would be controlled. By 1710 the average slaveholder owned eight slaves, and there was a higher percentage of women in Virginia’s slave population.

Importing Slaves into Virginia
Virginia was one of the first American Colonies to acknowledge slavery in its laws. In 1662, Virginia passed two laws that pertained solely to women who were slaves and to their illegitimate children. Under the first law, women servants who produced children by their masters could be punished by having to do two years of servitude after the expiration of the term with their masters.

The second 1662 law, which concerned the birthright of children born of Negro or mulatto women, would have a profound effect on the continuance of slavery, especially after the slave trade was abolished. Great Britain had a very structured system, under which children always claimed lineage through the father, even those born without the legitimacy of marriage. Virginia was one of the first colonies to legislate a change:

WHEREAS some doubts have arisen whether children got by any Englishman upon a Negro woman should be slave or free, Be it therefore enacted and declared by this present grand assembly, that all children born in this country shall be held bond or free only according to the condition of the mother, And that if any Christian shall commit fornication with a Negro man or woman, he or she so offending shall pay double the fines imposed by the former act.

This excerpt from Congress abolishes the African slave trade on history.com explains the situation:

After the [Revolutionary] war, as slave labor was not a crucial element of the Northern economy, most Northern states passed legislation to abolish slavery. However, in the South, the invention of the cotton gin in 1793 made cotton a major industry and sharply increased the need for slave labor. Tension arose between the North and the South as the slave or free status of new states was debated.

The importation of slaves was officially prohibited by Article I, Section 9 of the U.S. Constitution in 1808, but it had little impact. Slave smuggling was common. Virginia became the center of the slave trade and shipped Virginia-born slaves to fast-growing states along the eastern coast, and later in the Deep South. Natural increase accounted for practically all of the slave‐population growth in the United States.

Fear of Slave Uprisings
There was in colonial Virginia a relentless fear of slave uprisings, but there were none until well into the nineteenth century. In the early years of the eighteenth century, there were too few slaves in Virginia to form a cohesive unit, and the distances between plantations and the lack of a common language prevented those from communicating with one another.

However, slave conspiracies became more frequent and ambitious, but not until the antebellum period did one reach the level of an uprising. Fear of rebellion led whites to organize slave patrols, which hunted runaways and those traveling without passes; the penalties for such infractions grew increasingly harsh.

Every rumor of conspiracy resulted in laws increasing the severity of punishment, curtailing slaves’ movements, and restricting their ability to assemble, attend funerals or religious services, or possess weapons. The legislature passed additional regulations, including several aimed squarely at free blacks. Their right to vote was expressly denied, as was their ability to possess firearms.

Nat Turner Rebellion
In August 1831 the worst fears of Virginia’s whites were realized. In Southampton County, Nat Turner led the first successful slave uprising in Virginia, and the largest and most significant in United States history. Turner started with several trusted fellow slaves, but the insurgency ultimately numbered more than 70 enslaved and free blacks, some on horseback. They traveled from house to house, freeing slaves and killing all the white people they encountered.

During the rebellion, about sixty white farmers were killed, the highest number of fatalities caused by any slave uprising in the American South. The rebellion was put down within a few days, but Turner survived in hiding for more than two months afterwards. There was widespread fear in the aftermath of the rebellion, and white militias organized in retaliation against slaves.

The state executed 56 slaves accused of being part of the rebellion. In the backlash at least 100 more blacks were murdered by militias and mobs, many who had nothing to do with the rebellion. The following spring, the Virginia General Assembly passed new legislation making it unlawful to teach slaves, free blacks, or mulattoes to read or write.

Teaching Free Black Children to Read
In June 1852, a white woman named Margaret Douglass opened a school for free black children in her home in Norfolk, Virginia. She was arrested in May 1853 and was charged with “teaching colored children to read and to write.” Douglass pleaded ignorance of the law, believing that the law applied only to the teaching of slaves.

Douglass was sentenced to one month in the county jail. This is an excerpt from the judge’s statement at her sentencing:

There might have been no occasion for such enactments in Virginia, or elsewhere, on the subject of negro education, but as a matter of self-defense against the schemes of Northern incendiaries, and the outcry against holding our sIaves in bondage. Many now living well remember how, and when, and why, the anti-slavery fury began, and by what means its manifestations were made public. Our mails were clogged with abolition pamphlets and inflammatory documents, to be distributed among our Southern negroes to induce them to cut our throats….

For these reasons, as an example to all others in like cases disposed to offend, and in vindication of the policy and justness of our laws, which every individual should be taught to respect, the judgment of the Court is, in addition to the proper fine and costs, that you be imprisoned for the period of one month in the jail of this city.

Margaret Douglass served her time without complaint. Soon after her release, she and her daughter moved to Philadelphia in February 1854 where Douglass published an account of her Norfolk experience and lived “happy in the consciousness that it is here no crime to teach a poor little child, of any color, to read the Word of God.” Her story was published, along with those of Myrtilla Miner and Prudence Crandall in Three Who Dared: Champions of Antebellum Black Education (1984) by Philip Foner and Josephine Pacheco.

Slavery During the Civil War
Fearing that a slave uprising might accompany the start of the Civil War, slaveholders tightened plantation discipline in the spring and summer of 1861. As increasing numbers of white men left home for the Confederate army, however, and the dreaded slave rebellion never materialized, white Virginians loosened their grip on their slaves. Slaves sensed this and exploited their mistresses’ weakness in the absence of male authority figures.

Virginia had the largest population of enslaved African Americans of any state in the Confederacy, and many of them saw the approaching Union army as an army of liberation. As soon as Union forces took control of Fort Monroe in the spring of 1861, runaway slaves began flocking to their lines. Union commander at Fort Monroe, General Benjamin Butler, kept these slaves within his lines as contraband of war, meaning that if the Confederates could use slave labor to their advantage, the Union had the right to confiscate them.

Virginia’s slaves were eager to assist the Union soldiers in exchange for freedom and wages. Butler’s contraband of war argument won favor with the United States Congress, which passed the First Confiscation Act in August 1861, authorizing Union officials to seize any property the Confederates were using to assist in their war effort. Slaves who worked for the Confederate armies were included in this legislation.

Congress expanded its definition of contraband of war in the Second Confiscation Act of July 1862. Recognizing that all slaves working for Confederate masters were aiding the Confederate war effort, this law authorized Union personnel to capture all property belonging to Confederates, specifically declaring that slaves owned by men or women who favored the Confederacy were forever free of their servitude.

Slaves who ran away to the Union army during the first two years of the Civil War forced military and civilian officials to make emancipation an important issue on the Union war effort. The presence of runaways in nearly every Union encampment forced the U.S. Congress and President Abraham Lincoln to deal with the issue.

Self-Emancipation
In a state like Virginia, where Union forces were present in almost every area of the state, self-emancipation was a realistic option for many slaves. Those slaves living near Union armies routinely took advantage of the opportunity to run to freedom, and the likelihood of families escaping together increased over the course of the war.

When slaves could leave their owners’ homes and be safely within Union lines within a few hours, they were far more likely to run away. Close proximity to Union armies also provided more opportunities for women, children and elderly slaves to run away. Slaveholders near Union armies in northern Virginia, southeastern Virginia, and along the Chesapeake Bay reported frequent mass exoduses.

Young male slaves were more likely to run toward freedom because they had a better chance of surviving the journey. According to the 1860 U.S. Census returns, fifty-nine counties and three cities in Virginia had a population of 65,720 male slaves between the ages of eighteen and forty-five. In March 1865, those same fifty-nine counties and three cities held only 25,697 – a loss of 61 percent. Richmond and Henrico County lost 70 percent of their adult male slaves.

President Lincoln issued his Emancipation Proclamation on January 1, 1863, but it was the actions of the slaves themselves and their great desire for freedom that made emancipation an important objective in the Union war effort. The U.S. Congress confirmed that importance on January 31, 1865, by passing the Thirteenth Amendment to the U.S. Constitution, which abolished slavery throughout the United States.