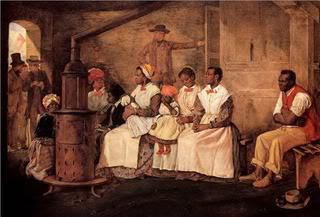 History of Slavery in Virginia

Image: In the Richmond Slave Market

Beginning with the arrival of the first Africans in Jamestown in 1619, a system of hereditary bondage for blacks gradually developed. Over the course of 150 years, slavery became entrenched in Virginia society, increasingly supported by a series of restrictive laws. Slavery was the foundation of Virginia’s agricultural system and essential to its economic viability.

To attract settlers, English citizens were offered land if they came to the new colony as indentured servants, and planters relied on these servants to harvest their tobacco. But once the servants had served their terms of indenture – usually seven years – they became free men and women, and were given fifty acres of land. And the supply of indentured servants decreased greatly by the end of the seventeenth century, and planters gradually began to shift to slave labor.

After years of depending upon voluntary servitude, Virginia planters switched to involuntary slavery based on race. They imported large numbers of African slaves. At first these slaves came from plantations in the West Indies, but by the late 18th century, they came directly from Africa, and busy slave markets were established in Philadelphia, Richmond, Charleston, and New Orleans.

Tobacco Slaves
The majority of blacks living in the Chesapeake worked on tobacco plantations and large farms. Since the cultivation of tobacco was extremely labor-intensive, African slave labor was used, despite questions of whether slavery was morally right. Tobacco cultivation rivaled the sugar production of the British West Indies.

Tobacco was an eleven-month crop. Cultivation began in late January with the preparation of the fields for planting, mending tools, laying out the seed beds, and planting the seeds. Once the soil was ready (usually in March), tobacco seedlings were transplanted from the beds to the fields. By midsummer, tobacco was growing, but the delicate plant required constant care. At harvest time, tobacco had to be gathered, cured, and prepared for shipment to England, which lasted well into the winter.

Farm Slaves
For slaves working on farms, the work was a little less tedious than growing tobacco, but no less demanding. The variety of food crops and livestock usually kept slaves busy throughout the year. Despite the difficult labor, there were some minor advantages to working on a plantation or farm compared to working in an urban setting or a household.

Generally, slaves on plantations lived in complete family units. Their work was dictated by the rising and setting of the sun, and they generally had Sundays off. The disadvantages, however, were stark. Plantation slaves were more likely to be sold or transferred than those in a domestic setting. They were also subject to brutal and severe punishments, because they were regarded as less valuable than household or urban slaves.

Plantation Slave Women
Slaves on the farms and plantations were in the fields from sunrise to sunset, and at harvest time they worked eighteen-hour days. On some plantations, Sundays were known as a day of rest, where the workload was lighter. Women worked the same hours as the men, and pregnant women were expected to continue until their child was born, then resume work a few days later.

Because the death rate was so high among the slaves, plantation owners began to encourage the slaves to have children to replace losses. Childbearing started around the age of thirteen, and by twenty the women slaves would be expected to have four or five children. To encourage childbearing some plantation owners promised women slaves their freedom after they had produced fifteen children.

Urban and Domestic Slaves
Urban and household slaves usually did not live in complete family units. Most domestic environments used female labor; therefore there were few men. Most male slaves in an urban setting were coachmen, waiting men, or gardeners. Others were tradesmen who worked in shops or were hired out. In general, urban slaves didn’t have the amount of privacy that field slaves had.

They lived in loft areas over the kitchens, laundries, and stables. They often worked seven days a week, even though Sunday’s chores were reduced. Their work days were not ruled by the sun; instead, they were set by tasks. But there were advantages to working in town.

Urban and domestic slaves usually dressed better, ate better food, and had greater opportunity to move about in relative freedom. They also were go-betweens for field slaves and the owners. They were privy to a great deal of information discussed in the big house.

They knew everything from the master’s mood to the latest political events. The marketplace became the communal center, the place for networking. There, slaves exchanged news and discussed the well-being of friends and loved ones. They often aided runaways, and they kept a keen ear to those political events that might have had an impact on their lives.

Regardless of a slave’s occupation, there was considerable fear and angst caused by an environment of constant uncertainty and threats of violence and abuse. But whether free or enslaved, blacks in the Chesapeake established familial relationships, networks for disseminating information, survival techniques, and various forms of resistance to their condition.

Slave Laws
Beginning in the mid-seventeenth century, the system of Virginia slavery developed and became codified. Statutes defining the status of blacks began to appear casually in the 1660s. In 1664, Virginia laws decreed that enslavement was for life and was transferred to the children through the mother. Black and slave became synonymous.

The Slave System
Although the number of African American slaves grew slowly at first, they soon became essential to the economy of Virginia. By 1680, the slave system was fully established. Under this system, a slave was chattel – an article of property that could be bought, punished, sold, loaned, used as collateral, or willed to another at the owner’s whim.

Slaves were not recognized as persons in the eyes of the law; thus they had no legal rights. Slaves could not legally marry, own property, vote, serve as witnesses, serve on juries, or make contracts. The offspring of female slaves also belonged to their owners, regardless of whom their fathers were.

Evidence indicates that the enslavement of Africans was due to economic requirements for labor, to the inability of Africans to resist slavery, and to European beliefs that Africans were an inferior branch of humanity, suited by their characteristics and circumstances to be lifelong slaves.

18th-century Virginia Slavery
As racial slavery spread from Virginia throughout the agricultural South after 1700, the number of Africans entering America increased substantially and continued throughout the 18th century. Approximately 430,000 Africans came to the thirteen American colonies, and the slave population of the United States over time grew almost tenfold through slave births.

By the last quarter of the 18th century, wealthy Virginia farmers were using slave labor in a diversified agricultural regime. Enslaved Africans also worked as skilled tradesmen in the countryside and in the capital city of Williamsburg. Many also served as domestics in the households of wealthier white Virginians.

The constant interaction between blacks and whites created an interdependence that led to the development of a distinctive Virginia culture. That interdependence was as destructive as it was unequal. The horrors endured by enslaved African Americans, whether physical or mental, were numerous.

White Virginians were caught up in a system that measured social distinction based upon ownership of slaves. Economic reliance on slavery, fears about the consequences of emancipation, and unyielding racial prejudice and cultural bias all contributed to the continuation of slavery in an era of independence.

During the Revolutionary War Era, more than half of all African Americans lived in Virginia and Maryland. Most lived in the Chesapeake region, where they made up more than 50 percent of the overall population. The majority of these were slaves. In fact, the first official United States Census taken in 1790 showed that only eight percent of the black populace was free.

Although many African Americans gained their freedom after the American Revolution (1776-1783), slavery in the United States grew even stronger after the 1790s, as cotton agriculture spread into Georgia and the new slave states of Mississippi, Alabama, and Louisiana.

The United States became a slaveholding republic in which blacks were owned by others. As human property, slaves had their life and work dictated by their masters, who perpetuated these inequities for generations. Slavery in America became so widespread that, in the end, only a Civil War could end it.