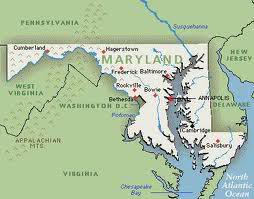 History of Slavery in Maryland

Maryland’s history as a slaveholding state was unique. Few land holdings in the state would have rated the name of plantation in the eyes of slaveholders from the Southern States, because the average number of enslaved persons owned by each slaveholder in Maryland was only three.

Founding of Maryland
Maryland developed from a tract of country belonging to the original grant of Virginia. George Calvert, the First Lord Baltimore, was looking for land with a similar climate to that of England on which to establish his new colony. He put his sights on obtaining land in Virginia, parts of which had already been colonized.

With few exceptions, Europeans came to the New World in search of some form of economic opportunity. If they were poor and landless in Europe, they saw the chance to obtain land for themselves and their families. They believed the New World offered a chance to become more economically secure.

In the Colony of Maryland, many of the settlers began to establish themselves as tobacco planters. Maryland planters had good examples of other agricultural colonies in the New World to borrow from. The Spanish and French were growing sugar cane in the Caribbean, and even in Virginia by the time Maryland was organized, Africans were being used as workers.

Tobacco
Tobacco was the main export of the colony (corn was second), and it provided the main means of wealth and prosperity. Tobacco was the only crop having a fully-developed market that extended to the Chesapeake region, and included English and Dutch merchants who had already been trading with the colonists in Virginia.

As the Maryland colony grew, farmers discovered that it took a lot of land and people to grow tobacco. The colonists had plenty of land, but not enough workers. Farmers had tried to use several different kinds of labor. They signed contracts with indentured servants from England, and enslaved Native Americans and Africans, but for many reasons, the colonists ended up relying on African slaves.

Landowners felt justified in using Africans as slaves in Maryland because the Africans were different. They had different skin color, spoke different languages, and worshipped a different god. Since they were far away from home, Africans had nowhere to run and no one to protect them. African slaves performed a great number of jobs for the colonists in Maryland, but their most important job was to work on tobacco farms.

African Import and Slavery
It is believed that approximately 20 Africans arrived in Port Comfort in late August 1619 on a Dutch ship, and that by the 1650s the numbers had grown to between 300 and 400. They probably arrived in small groups, particularly during the intense Dutch trade activity in the 1640s and 1650s.

The origins of slaves were diverse. They came from Africa by way of England, from the British Caribbean, and a substantial number from Spanish and Portuguese colonies. Although there were places along Chesapeake Bay where English colonists and African Americans lived congenially side-by-side as near equals, it is certain that most Africans were slaves.

It is speculated that all blacks probably arrived as slaves but that some were freed, and all enjoyed rights that slaves in other states did not. Africans were able to become assimilated into the colony by learning English, becoming Christians, and mastering the work routines of the Europeans.

Life for slaves changed drastically in the 1660s, as a result of legislation in Maryland and Virginia. As white European servants became scarce and expensive, and as Africans began dominating the labor force, a caste system developed, sealing the fate of slaves and removing opportunities for freedom and advancement.

Slaves who arrived in Maryland in the 1670s would be slaves for life. They would face a harsh environment in which they were subject to volatile diseases, a shortage of women resulting in low reproduction, abusive masters, isolation from other Africans, and restriction of mobility.

Image: A Slave Auction
Illustration by Edmund Ollier
An enslaved mother and her daughter on the auction block; another enslaved mother with infant waiting to be sold; white onlookers and white auctioneer.

Slave Laws
Maryland wrote new laws that treated African slaves differently from everyone else in the colony. These laws slowly took away their rights, and ruled that all Africans arriving in the colony were presumed to be slaves.

In 1664, Maryland passed a law making lifelong servitude for black slaves mandatory to prevent them from taking advantage of legal precedents established in England that granted freedom under certain conditions, such as the conversion to Christianity. Similar laws were later passed in New York, New Jersey, the Carolinas, and Virginia.

Throughout most of the colonial period, opposition to slavery among white Americans was virtually nonexistent. Settlers in the 17th century came from sharply divided societies in which the wealthy exploited members of the lower classes. They saw little reason to question the enslavement of Africans. As they sought to mold a docile labor force, planters resorted to harsh repressive measures that included liberal use of whipping and branding.

Racial Inferiority
One characteristic which set American slavery apart was its racial basis. Here, with only a few exceptions, all slaves were Africans, and almost all Africans were slaves. This placed the label of inferiority on black skin and on African culture. In other societies, it had been possible for a slave to obtain freedom and take his place in society.

Not only did white America become convinced of white superiority and black inferiority, but it strove to impose these racial beliefs on the Africans themselves. Slave masters gave a great deal of attention to the education and training of the slave. In general, there were five steps in molding the character of a slave: strict discipline, a sense of his own inferiority, belief in the master’s superior power, acceptance of the master’s standards, and a deep sense of his own helplessness.

Intermarriage
During the colonial period in Maryland, most free Africans descended from white women who had children by African men. There had been a number of marriages between white women and slaves by 1664, when Maryland passed a law that made them and their mixed-race children slaves for life, noting that: diverse freeborn English women forgetful of their free Condition and to the disgrace of our Nation do intermarry with Negro Slaves.

In 1692, Maryland enacted a law that punished white women who had children by slaves by selling them as servants for seven years, and binding their children to serve until the age of twenty-one if they were married to the slave, and until thirty-one if they were not married.

If a woman had a child by a free black person, she was usually charged with fornication and received a sentence of a fine or lashes, and the child was bound until the age of twenty-one for boys and sixteen for girls. At least 256 white women were prosecuted in Maryland for this offense during the colonial period. Some had a number of children, indicating long-standing relationships.

Elizabeth Grimes, a mixed-race woman, had six children, four by a free person. In June 1721, the Prince George’s County court ordered her sold for seven years and sold her child, whom she had by a slave, for one thousand pounds of tobacco to serve until the age of thirty-one. But the court called her other child her white daughter, and bound her until the age of sixteen.

Free African American families in Maryland appear to have had closer relations with the slave population than did their counterparts in other colonies or states, particularly North Carolina and Delaware. Many early nineteenth-century certificates of freedom describe Maryland descendants as being dark-skinned.

Regardless, these people eventually improved their lives and by the 1720s, there were enough native-born African Americans in Maryland to create its own slave population. From this grew a distinctive American culture for Africans.