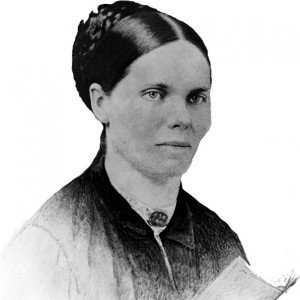 Georgiana Bruce Kirby was a woman with ideas far ahead of her time – an early suffragist, educator and a California pioneer. In a world dominated by men, Kirby’s intelligence and questioning mind would not allow her to accept a traditional life in which she could not pursue her ambitions and goals. Georgiana Bruce Kirby Preparatory School in Santa Cruz was named in her honor.

Early Years
Georgiana Bruce was born in Bristol, England on December 7, 1818. She immigrated to the United States when she was only twenty. Living in Boston, Massachusetts, she became fascinated with Transcendentalism, and eventually drifted to Brook Farm, a utopian experiment in communal living based on Transcendentalist ideals. It was founded by former Unitarian minister George Ripley and his wife Sophia Riplet at the Ellis Farm in West Roxbury, Massachusetts (9 miles outside of Boston) in 1841.

Georgiana spent four years there, and came under the influence of many of the great thinkers and authors of her time, including Nathaniel Hawthorne, Margaret Fuller and Ralph Waldo Emerson. It was there that Georgiana took up writing and made the acquaintance of author and feminist Eliza Farnham.

At Brook Farm, women could expand beyond their typical sphere and their labor was highly valued. They did have tasks that were typical of other women at the time, such as food preparation and housekeeping. However, during harvest time women were allowed to work in the fields, and men helped with the laundry during cold weather.

No single religion was allowed to impose its beliefs on the community; therefore, women were safe from the typical patriarchy associated with religion at the time. Because of the community’s focus on individual freedom, women were autonomous from their husbands and were also allowed to become stockholders.

Women also played an important role in providing sources of income to the community. Many devoted time to making small clothing items for sale at shops in Boston. Others painted and sold screens and lamp shades. Women were allowed to go to school and, because of the well-known education of women at Brook Farm, many female writers and performers visited the farm.

After her stay at Brook Farm, Georgiana Bruce began a career in teaching and became active in the anti-slavery movement. She also spent a year working with Eliza Farnham at Sing Sing prison, where the two women instituted significant, though controversial, reforms in the treatment and education of the female inmates.

In addition to their work in prison reform Bruce and Farnham were also involved in the women’s rights movement. Despite the improvements the two women made at Sing Sing, Farnham’s liberal views brought her into conflict with other staff members and she was forced to resign in 1848.

That same year, Farnham’s husband died suddenly in San Francisco, and she sailed to California in 1849 to settle her husband’s estate. She started a farm she called El Rancho La Libertad on land she had inherited from her husband in the isolated community of Santa Cruz.

Life in California
With funding from journalist and politician Horace Greeley, Georgiana Bruce had the opportunity to travel to California in the summer of 1850. When she visited her friend Eliza Farnham in Santa Cruz, Bruce fully intended to open a girls’ school there and do what she loved best: teach. But the Methodists had already established a school there, and there were not enough students to support a second.

Therefore she decided to join Farnham at El Rancho La Libertad, where the two women roofed and joined their new house, broke sod and planted potatoes, ordered fruit trees and raised poultry. To be able to work and move freely, they wore bloomer costumes, to their neighbors’ amusement. Side by side they discussed the future of women as they hammered and planted and harvested.

Bruce subscribed to the ideas about equality of the sexes being put forward in the East at that time by the women’s rights movement. Farnham believed instead that each sex had distinct spheres and talents, that women were properly domestic and men public, and that women neither needed nor would benefit from individual legal and political rights.

In 1856, Eliza Farnham wrote a book of her experiences called California, In-doors and Out, Or, How We Farm, Mine, and Live Generally in the Golden State, the first book about California written by a woman, in which she described the experiences she and Georgiana (whom she called Geordie) had at El Rancho La Libertad. The following is an excerpt:

Geordie and I always made a procession in getting off to any distance – she invariably falling some six or eight steps behind with her spade, hoe, or whatever it might be, swinging as a walking-stick; and there was always about her, in these walks, a plodding, matter-of-fact air that irresistibly amused me, when, as it often happened, I was compelled to turn back to address her.

In her air, look, and manner, there was something that seemed to suggest that it was a very old business with her, and that she was mentally comparing the prospects of this year with those of some cold, or hot, or wet, or dry season, of years ago, or estimating the comparative expense and durability of modes of fencing, the utility of improved plows, harrows, scarecrows, etc.

However, Farnham’s Santa Cruz farming experiment failed after less than two years. The labor was too hard, Farnham’s business acumen too flawed and capital resources too limited, and the men she employed too untrustworthy.

Georgiana Bruce then moved on with her life. She married Santa Cruz businessman Richard Kirby in 1852, had five children, and created her own home and garden. Before coming west, she was used to stirring up things up in the East. In rural California, however, she had to bide her time. She began recording her experiences in a journal in 1852.

From The Journal of Georgiana Buce Kirby, 1852:

Our rancho with its hollows and gulches and noble sweep of hills exactly suits me, but I have been used to mixing in pretty large circles and miss the pleasant and healthy excitement caused by the friction of mind on mind. I long for flowers and fruits and music, too, but one cannot expect every good thing in the present state of society and I have many as it is – unsurpassed beauty of scenery and climate, good health, neither poverty or riches, and the most devoted friend in my husband.

The other day Mr. K. brought home a balm of Gilead tree about 4 1/2 feet high and planted it just opposite the kitchen window. It really gladdened my heart as I watched it constantly during the day as I would a child. It was the first step in the way of refined cultivation and gives me faith in the future roses, lilies, dahlias and so forth, gives me faith that I shall one day gather glorious red currants and Antwerp raspberries and luscious English gooseberries in our own garden on our own Rancho La Salud….

Georgiana Bruce Kirby became a leading figure in the community of Santa Cruz and took up the causes of temperance and women’s suffrage, which she wrote about frequently in local and national papers. In 1869 she founded the first local society of suffragists. Kirby also collaborated with national women’s rights leaders such as Elizabeth Cady Stanton and Susan B. Anthony.

In the ensuing years, both Eliza Farnham and Georgiana Bruce Kirby published numerous writings on a variety of subjects including the abolition of slavery and women’s rights. Their originality of thought was to influence many generations of feminists yet to be born. Farnham also wrote an account of her relationship with Bruce, The Ideal Attained; being the story of two steadfast souls and How they Won Their Happiness and Lost it Not, which was published just after Farnham’s death in 1865.

Georgiana Bruce Kirby published Letter from California in the National Anti-Slavery Standard in 1869. This is an excerpt from that essay:

In spite of our vaunted climate, the wheat crops, and even the Overland Monthly, it takes a long, long time for an adopted Californian to become acclimated. We suffer – not like the Englishman in New York, from “same sickness” produced by the monotony of the always repeated blocks of houses, but from what may be called non-cohesion.

We are from the extreme West, the southwest – England, Ireland, France, Australia. We have torn up the roots that fastened us to the old homes, the old associates, and cautiously, slowly, put down slender fibres into the new soil. Hence, in full possession of the wheat, grapes and Overland we are conscious of faintness, almost starvation at times. Only the children are in a healthy condition and happy, those who have lived in one place long enough to call it home. This want of union is deplored….

Sitting by my own hearth, with the reliable oak wood blazing (not snapping) at my feet, I read the beloved Standard, companion of twenty-five years; read therein accounts of Radical Clubs in Boston, and Women’s Parliaments in New York; of Social Science Conventions, and Freedmen’s schools and sigh to think that our isolated position and our unassimilated population forbid our participating in similar activities.

During her years in Santa Cruz, Georgiana Kirby also published fiction, including short stories in the Overland Monthly.

Georgiana Bruce Kirby died January 26, 1887 at age 68. Her memoirs, Years of Experience: An Autobiographical Narrative, was published later that year.

Kirby’s diary was published by the Santa Cruz Historical Society as Georgiana Bruce Kirby: Feminist Reformer of the West (1987).