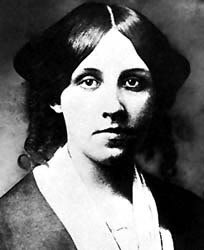 Louisa May Alcott was born in Germantown, Pennsylvania on November 29, 1832, the second daughter of Abigail May, women’s suffrage and abolitionist advocate, and Bronson Alcott, philosopher and education reformer. Louisa and her three sisters, Anna, Elizabeth, and May were educated by their father, and spent their childhood in Boston and Concord, Massachusetts.

When Louisa was 10, Bronson enlisted the family in an experiment in communal living on a tract he named Fruitlands, because of its orchard. Six months of Transcendental agriculture left the Alcotts destitute, Bronson suicidal, and the Alcott marriage on the verge of dissolution. A distressed Louisa recorded it all in her childhood diary.

At age 15, troubled by the poverty that plagued her family, Alcott declared:

I will do something by and by. Don’t care what, teach, sew, act, write, anything to help the family; and I’ll be rich and famous and happy before I die, see if I won’t!

In a society that offered little opportunity to women seeking employment, Louisa was determined to make her own way. She began to contribute to the family income with various jobs including teacher, seamstress, and servant.

She began her career as an author by writing poetry and short stories that appeared in popular magazines. In 1854, when she was 22, her first book Flower Fables was published.

The Alcotts were staunch abolitionists, supporting complete racial equality, including intermarriage. As part of the Underground Railroad, they risked their own freedom hiding fugitive slaves.

By 1858, the Alcotts were living in Concord, Massachusetts. Bronson had become friends with fellow transcendentalists Ralph Waldo Emerson, whose vast library Louisa frequented, and Henry David Thoreau, whom she accompanied on walks in the countryside. Margaret Fuller and Nathaniel Hawthorne were also part of the Alcotts’ social circle in New England.

American Civil War
Louisa was writing for the Atlantic Monthly when the Civil War broke out. She enlisted as a nurse and went to the Union Hospital in Washington, DC in 1862. Like many other nurses, Louisa contracted typhoid fever and although she recovered, she would suffer the poisoning effects of the mercury that cured the disease for the rest of her life. Hospital Sketches was based on the letters she wrote home during that time It soon became her first bestseller.

After the war, Louisa got involved with the same reform movements her mother was active in: the abolition of slavery and women’s rights. She was by then an accomplished writer, achieving wide acclaim and supporting her family financially.

Little Women
When Louisa was 35 years old, her publisher Thomas Niles in Boston asked her to write “a book for girls.” Surrounded by acres of apple trees, her rambling and dignified home, Orchard House, became the setting for her novel, Little Women, written from May to July 1868. 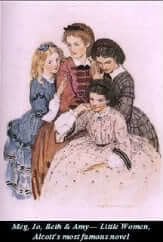 Louisa based the novel on the lives of her and her sisters, and was set in Civil War New England. Jo March was the first living, breathing American juvenile heroine in children’s fiction. Its sequels were Good Wives (1869), Little Men (1871), and Jo’s Boys (1886).

Abigail Alcott had died in 1877, but Louisa continued her mother’s work. She wrote for The Woman’s Journal and canvassed door to door, encouraging women to register to vote. In 1879, she became the first woman in Concord to register to vote in the village’s school committee election.

Louisa’s sister May announced her marriage to a wealthy European in 1878. May gave birth the following year to a daughter she named Louisa May, nicknamed Lulu. Sadly complications arose, and May died December 29th of the same year. Her dying wish was for Louisa to care for her namesake.

In 1880, Lulu moved to Boston with Louisa, and brought great joy to the remainder of Alcott’s life. Louisa was still writing, but the mercury poisoning was beginning to take its toll. Her father’s health finally failed, and he passed on March 4, 1888.

Two days later, at the age of 56, Louisa May Alcott died in Boston, leaving a legacy in wonderful books to be cherished for generations to come. In all, she published over 30 books and collections of stories.

She was buried on Authors Ridge in the Sleepy Hollow Cemetery in Concord, Massachusetts, near her family and friends—Emerson, Hawthorne, and Thoreau. An inconspicuous marker, set flat on the ground, reads only Louisa M. Alcott.

Far away, there in the sunshine, are my highest aspirations. I may not reach them, but I can look up and see their beauty, believe in them, and try to follow where they lead.
~Louisa May Alcott~