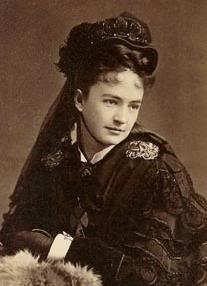 Libby Bacon met George Armstrong Custer at a Thanksgiving social in 1862, while he was visiting Monroe, Michigan on leave during the Civil War. She fell deeply in love with him, but her father refused to allow them to get married. Custer was from a poor undistinguished family and the Judge hoped Libby would have a better life than that of an army wife.

Elizabeth “Libby” Clift Bacon was born at Monroe, Michigan, April 8, 1842 – the only surviving child of Judge Daniel and Eleanor Sophia Bacon. At twenty, Libby graduated as valedictorian from the Young Ladies’ Seminary and Collegiate Institute in Monroe. At 5′ 4″ tall with chestnut brown hair and blue-grey eyes, she was both beautiful and intelligent.

George Armstrong Custer was born in New Rumley, Ohio, on December 5, 1839, and spent much of his childhood with a half-sister in Monroe, Michigan. Immediately after high school, he enrolled in West Point, where he utterly failed to distinguish himself. Several days after graduating last in his class, he failed in his duty as officer of the guard to stop a fight between two cadets. He was court-martialed and saved from punishment only by the huge need for officers with the outbreak of the Civil War.

Custer did unexpectedly well in the Civil War. He fought in the First Battle of Bull Run, and served with distinction in the Virginia and Gettysburg campaigns. Although his units suffered enormously high casualty rates – even by the standards of the bloody Civil War – his fearless aggression in battle earned him the respect of his commanding generals and increasingly put him in the public eye.

Custer’s meteoric rise to brigadier general before Gettysburg, where he emerged as a national hero, overcame her father’s objections. Judge Bacon relented, and Libby married Custer on February 9, 1864. Custer advanced to the rank of Major General later that year at the age of 25.

From the beginning, Libby’s charm and attractiveness helped advance her husband’s military career. She socialized with powerful Republican congressmen and senators, countering their suspicions that Custer had ties to the Democrats. Libby and George had a loving but tumultuous relationship. Both were stubborn, opinionated and ambitious. Despite hardships, they were utterly devoted to each other. She followed him to every assignment, even during the latter days of the Civil War.

Custer’s cavalry played a critical role in forcing the retreat of Confederate General Robert E. Lee and his forces that ended the war; in gratitude, General Philip Sheridan purchased the table on which General Ulysses S. Grant had written the terms of surrender accepted by General Lee at Appomattox, and gave it to the Custers.

After the Civil War, Sheridan assigned Custer to command a cavalry division in Hempstead, Texas. Libby accompanied the troops in August 1865, and later wrote of her hardships in her second book, Tenting on the Plains, published in 1887. Her early response to Texas was mixed. She found that the homes, even of the well-to-do, were often poorly constructed. Many wealthy planters, however, welcomed the Custers warmly. One such family nursed Libby when she fell ill with malaria.

After he became chief of cavalry in Texas in the fall of 1865, Custer moved his 4500 cavalrymen, and Libby, to Austin to help support the efforts of the unpopular Reconstruction government, and to protect Texas from a perceived threat from the Maximilian regime in Mexico.

Despite being the head of the occupying forces, Custer and his wife were very popular with the citizens of Austin, and they continued associating with wealthy planters. Overall, whatever her criticism of the state, Libby saw great economic potential in Texas, and tried unsuccessfully to interest her father in investing in Texas land.

Custer became lieutenant colonel (his peacetime rank) of the Seventh Cavalry in July 1866, and was assigned to a series of dreary and unsatisfying assignments in Kansas and the Dakota Territory. Libby’s prized Texas serapes decorated their quarters at Forts Riley, Leavenworth and Lincoln. Life on the frontier outposts was difficult and Custer’s career was plagued with problems.

In late 1867, Custer was court-martialed and suspended from duty for a year for being absent from duty during the campaign – he had left the field to be with Libby. He maintained that he was simply being made a scapegoat for a failed campaign, and his old friend General Phil Sheridan agreed, calling Custer back to duty in 1868. In the eyes of the army, Custer redeemed himself by his November 1868 attack on Black Kettle’s band on the banks of the Washita River.

Custer was sent to the Northern Plains in 1873, where he soon participated in a few small skirmishes with the Lakota in the Yellowstone area. The following year, he lead a 1200 person expedition to the Black Hills, whose possession the United States had guaranteed to the Lakota just six years before.

In 1876, Custer was scheduled to lead part of the anti-Lakota expedition, along with Generals John Gibbon and George Crook. He almost did not make it, however, because his previous testimony about Indian Service corruption so infuriated President Ulysses S. Grant that he relieved Custer of his command and replaced him with General Alfred Terry. Popular disgust, however, forced Grant to reverse his decision, and the Custers went West.

As first lady at Fort Abraham Lincoln, Libby set the social tone for the post, and hosted multiple events for the officers and area dignitaries. She was quickly assigned the title Mrs. Major General, but in a letter to her husband, she claimed that it made her sound stuck-up.

Indian Wars
The 1876 campaign against the Sioux seemed like a chance for glory to Custer. From Fort Lincoln in what is now North Dakota, he led the Seventh Cavalry in pursuit of Sitting Bull, Crazy Horse and the Sioux and Northern Cheyenne, who refused to be confined to the reservation system.

The United States plan for defeating the Lakota called for the three forces under the command of Crook, Gibbon, and Custer to trap the bulk of the Lakota and Cheyenne population between them and deal them a crushing defeat. Custer advanced much too quickly, which put him far ahead of Gibbon’s slower-moving infantry brigades, and General Crook’s forces had been turned back by Crazy Horse and his band at Rosebud Creek.

Custer neared what he thought was a large Indian village on the morning of June 25, 1876, and ordered an immediate attack on the Indian village. Contemptuous of Indian military prowess, he split his forces into three parts to ensure that fewer Indians would escape.

The attack was one the greatest fiascos of the United States Army. Thousands of Lakota, Cheyenne, and Arapaho warriors forced Custer’s unit back onto a long, dusty ridge parallel to the Little Bighorn, surrounded them, and killed all 210 of them. Custer’s blunders cost him his life but gained him everlasting fame. 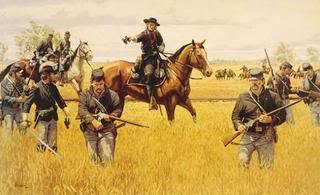 Custer at Hanover
Artist Dale Gallon depicts the June 30, 1863, clash between elements of the Union’s Third Cavalry Division and J.E.B. Stuart’s “Invincibles” at the Battle of Hanover (PA), part of the Gettysburg Campaign. Here, troopers of the 6th Michigan cavalry are being deployed as skirmishers by their new twenty-three year old commander George Armstrong Custer. In this engagement the 5th and 6th Michigan Cavalry were armed with new seven-shot, magazine-fed rifles, which could fire seven .52 caliber rounds in a minute’s time. This would prove a lethal advantage of firepower to both the Union and Custer.

When Libby Custer learned that President Grant had publicly blamed Custer for the disaster at Little Big Horn, and had charged him with disobeying orders, she launched a one-woman campaign to rehabilitate her husband’s image. To Libby, George Armstrong Custer could do no wrong. She began writing articles and making speeches, all of which were brilliant pieces of propaganda aimed at glorifying her husband’s memory.

After Custer’s death, Libby moved to New York, where she sought work to supplement her small widow’s pension. She wrote three books about their life at frontier posts in order to ensure that Custer’s memory would always be honored. In Boots and Saddles: Life in Dakota with General Custer, published in 1885, she describes her life from 1873 to 1876, and compellingly presents the shared anxiety of wives left at Fort Lincoln while their husbands fought and died at Little Big Horn.

In 1890, Libby published her last book, Following the Guidon, in which she picks up the story when her husband returned to duty in Kansas in 1868 to join the campaign culminating in the Battle of Washita. She vividly recalls her fearful visits with captured Native Americans and tribal peace council delegates, while glorifying her husband’s honest treatment of those he helped defeat.

Throughout her 57 years of widowhood, Mrs. Custer worked untiringly to defend her husband’s reputation and transform him into a hero. She influenced a number of writers, and in all her works, her husband emerged as an exemplary son, brother, husband, and conscientious commanding officer. Since the army and the public saw Libby as a model wife and a devoted widow, many Custer critics withheld their comments during her lifetime.

Known throughout her life for her undying devotion to her husband, Libby was the only officer’s wife to live in a tent on the edges of a Civil War battlefield, ride in the ranks with the soldiers, and accompany the 7th Cavalry on many of its expeditions. During those adventures, she wore her own uniformed dresses to show her dedication to her husband and the US Army.

Libby Custer remained utterly devoted to her husband and never remarried. She died at her home in New York City on April 4, 1933, a few days before her 91st birthday. She was buried at West Point next to her husband. They had no children.

A year after Libby Custer’s death, Frederic Van de Water published The Glory-Hunter, and the reappraisal of Custer’s character and career began.