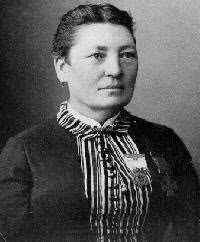 Annie Etheridge had already been a nurse at a Michigan hospital, and the Civil War provided her the perfect opportunity to continue in that profession. She acted as what today would be called a combat medic, providing immediate medical care to wounded soldiers, often under fire during battle. In addition to nursing, she served the regiment as cook and laundress. Etheridge was one of only two women to receive the Kearny Cross.

Lorinda Anna “Annie” Blair was born into a wealthy family on May 3, 1844, in Detroit, Michigan. She was an only child, and her mother died when she was quite young. Soon thereafter, Annie moved with her father to Milwaukee, Wisconsin. The greater part of her childhood was spent there.

At the age of sixteen, Annie married James Etheridge. When her father lost nearly all of his wealth, he returned to Michigan. Annie remained in Wisconsin with her husband, but her marriage failed. She returned to Detroit in 1861.

Civil War Nurse
After the Civil War began, Annie enlisted as a Daughter of the Regiment in the 2nd Michigan Infantry. Daughters of the Regiment were women who followed the army in a quasi-military capacity, did chores in camp, and usually served as nurses.

Annie marched with her regiment to Washington, DC, where they joined the Army of the Potomac. Her first battle was at Blackburn’s Ford, Virginia. When the fighting started, she ran onto the battlefield and nursed the wounded.

At the Second Battle of Bull Run, Annie was almost captured by the Rebels while tending to the wounded. It was here that she came to the attention of General Phillip Kearny, who recommended she be given a horse and the rank of sergeant. She received the horse but not the rank, because General Kearny was killed during the Union retreat.

Gentle Annie, as the soldiers called her, was an expert horsewoman. She filled her saddle bags with lint and bandages, and rode onto the battlefields to care for the injured soldiers. She was loved universally for her selflessness, and was highly prized for her courage in tending the wounded while under fire from the enemy.

She wore a long sidesaddle skirt with two pistols on her belt, and stayed just behind the lines. When she saw a man fall, she dashed into the midst of the battle to lift the wounded soldier onto her horse and get him to safety. Twice her horse was shot out from under her.

Once the fighting had ended, she would scour the area to retrieve the soldiers who had been left on the battlefield, and bound the wounds of those who had not yet been seen by a surgeon, making them as comfortable as possible.

After the Battle of Antietam, the 2nd Michigan was transferred to Tennessee, but Annie elected to stay with the Army of the Potomac and joined the 3rd Michigan Infantry Regiment, in which she had many friends. With this unit, she cared for the wounded at the Battles of Chancellorsville and Gettysburg.

At the Battle of Chancellorsville, Annie was wounded when a Union officer attempted to hide behind her. Her hand was struck by a Minie ball, and her petticoats were riddled with bullets. The officer was killed, and Annie’s horse was wounded.

In the summer of 1864, General Ulysses S. Grant ordered all women to leave the Union camps. Annie was forced to leave her regiment, but she did not go home. She joined the hospital service at City Point, Virginia.

At the end of her three-year enlistment, Annie was still not ready to quit. She joined the 5th Michigan and cared for the thousands of soldiers who were injured at the Battles of Spotsylvania Court House, Cold Harbor, Hatcher’s Run and during the siege of Petersburg.

George Hill, one of the soldiers she nursed during the war, wrote on his deathbed:

Annie, dearest friend, I am not long for this world, and I wish to thank you for your kindness ere I go. You were the only one who was ever kind to me since I entered the army.

For her bravery under fire, Annie was one of only two women awarded the Kearny Cross, named in honor of General Phillip Kearney for “noble sacrifice and heroic service to the Union army.”

She returned to Detroit with her regiment after the war ended, and remained with them until they were mustered out in July 1865. Though her health had been somewhat compromised by her traumatic experiences, she took a job at the Treasury Department and worked 12 hours a day to support herself and her aged father. She married a war veteran named Charles Hook in 1870.

Annie had received no pay for her four years of service to the Union Army during the Civil War. In 1886 she requested a pension of $50 a month. In 1887 Congress approved a pension of $25 a month.

Annie Blair Etheridge died in 1913 and received a veteran’s burial in the Arlington National Cemetery.