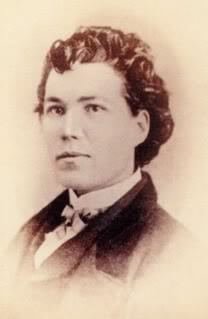 Offended by the idea of slavery, Sarah Emma Edmonds enlisted in the Second Michigan Infantry as Frank Thompson on May 25, 1861, when the first call for volunteers came from President Abraham Lincoln. She was given the rank of Private, and was assigned as a male nurse at the field hospital of the 2nd Michigan Volunteers. In her own words, she “went to war with no other ambition than to nurse the sick and care for the wounded.”

Early Years
Born in 1842 in Nova Scotia, Sarah Emma Edmonds began life in a strict religious home where her father resented her for not being a boy. Emma endured her early childhood in Canada, trying to please her father by exhibiting masculine traits.

By 1859, Edmonds dressed as a man and took the name Frank Thompson. She left Canada for the United States, where she sold religious books throughout New England and the upper Midwest. By 1861, she had set up residency in Flint, Michigan.

Sarah wrote about her experiences at the First Battle of Bull Run:

Our surgeons began to prepare for the coming battle, by appropriating several buildings and fitting them up for the wounded – among others the stone church at Centreville – a church which many a soldier will remember, as long as memory lasts.

The first man I saw killed was a gunner. A shell had burst in the midst of the battery, killing one and wounding three men and two horses. Now the battle began to rage with terrible fury. Nothing could be heard save the thunder of artillery, the clash of steel, and the continuous roar of musketry.

I was sent off to Centreville, a distance of seven miles, for a fresh supply of brandy, lint, etc. When I returned, the field was literally strewn with wounded, dead, and dying. Men tossing their arms wildly calling for help; there they lie bleeding, torn and mangled; legs, arms and bodies are crushed and broken as if smitten by thunderbolts; the ground is crimson with blood.

From Nurse and Spy in the Union Army: The Adventures and Experiences of a Woman in Hospitals, Camps, and Battle-Fields, by S. Emma E. Edmonds.

Due to the execution of a Union agent in Richmond, word was put out that General McClellan was looking for a spy to infiltrate the Confederacy. Private Thompson promptly volunteered and learned all she could on weapons, tactics, local geography, and military personnel. She easily impressed the staff and was given the position.

Her first disguise for entering the Confederacy was as a black man. With the assistance of the wife of the local chaplain, the only person who knew her true identity, she used silver nitrate to darken her skin to the point that the doctor she worked for in the hospital didn’t recognize her. She wore men’s clothing and a black minstrel wig and departed on her first mission as Cuff.

Cuff easily infiltrated the local Negro population as a slave and was assigned to work on the ramparts being built to counter McClellan. After her first day, her hands were so blistered she changed jobs with a fellow slave and worked in the kitchen. She collected information on the morale of the troops, the size of the army, and gun placements. She returned to the Union army, where her information was well received by McClellan, and she returned to duty as a male nurse.

After two months, she was once again asked to go behind enemy lines. This time she went as a fat Irish peddler woman with the name of Bridget O’Shea. She easily entered the Confederate camps by selling her wares. She was shot in the arm, but managed to stay on her horse and return with valuable information.

She went again at the end of 1862, this time as a young man with Southern sympathies by the name of Charles Mayberry, her mission was to identify the Southern spy network in Louisville, Kentucky. She succeeded again, this time just in time for the battle of Vicksburg.

Sarah went back to caring for the sick as a male nurse, but soon contracted malaria. Unwilling to be discovered as a woman, she left camp to recover. Arriving in Cairo, Illinois, she once again became a woman and checked herself into a hospital for treatment of malaria. Once recovered, she wanted to rejoin her unit, but discovered that she was listed as a deserter.

With the last of her funds, Sarah boarded a train for Washington, took her real name back, and worked as a female nurse for the United States Christian Commission until the end of the war.

Sarah wrote a fictionalized account of her life called Nurse and Spy in the Union Army that was widely popular, selling some 175,000 copies when it was published in 1865. Sarah gave all profits from the book to the U.S. War Relief Fund.

She returned to Canada, where she met and married Linus Seelye, a carpenter, in 1867. Their three children all died young, and they returned to the U.S. and adopted two boys. They moved around frequently over the years, going to Michigan, Illinois, Ohio, Louisiana, and Kansas.

In 1882, Sarah was living in Fort Scott, Kansas, when she attempted to get affidavits from her old army comrades in order to receive a veteran’s pension from the government. She also worked very hard to have her records cleared of the desertion charges.

Her former captain wrote on her behalf: “She followed that regiment through hard-fought battles, never flinched from duty, and was never suspected of being else than what she seemed. The beardless boy was a universal favorite.”

On July 5, 1884, a special act of Congress granted Sarah Emma Edmonds, alias Frank Thompson, an honorable discharge from the army, plus a bonus and a veteran’s pension of twelve dollars a month. A letter from the Secretary of War, dated in June of that year, recognized her as “a female solider who… served as a private… rendering faithful service in the ranks.”

Sarah attended an army reunion in 1884, and shocked her fellow veterans when they realized that Frank Thompson was indeed a woman. Many were amazed at the courage and strength this woman had displayed during the war.

In 1897, Sarah Seelye joined the McClellan Post and became a member of the Grand Army of the Republic – the only woman ever admitted.

Sarah Emma Edmonds Seelye lived the rest of her life in La Porte, Texas, where she died of malaria on September 5, 1898, at the age of 56. She was buried with full military honors in the Grand Army of the Republic (GAR) section of Washington Cemetery in Houston, Texas, the only woman buried there. Her tombstone reads: Emma E. Seelye – Army Nurse.

In her own words, Sarah/Frank said of her experiences: “I am naturally fond of adventure, a little ambitious, and a good deal romantic – but patriotism was the true secret of my success.”