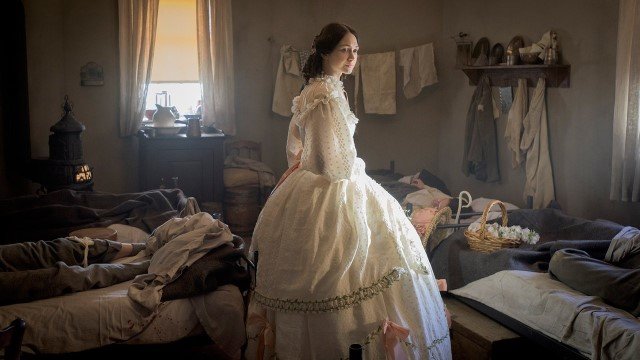 Mercy Street
In January 2016, PBS broadcast Mercy Street, a six-part series about the James Green family who lived in Alexandria, Virginia during the Civil War. The Greens owned several properties in the area, including the opulent Mansion House Hotel. James’ teenaged daughter Emma Green served as a nurse there. The producers of the film also used the writings of nurse Mary Phinney who worked with Emma at the Mansion House Hospital.

Early Years
Emma Frances Green was the daughter of James Green, the wealthiest man in Alexandria, Virginia. Green owned several properties and businesses in Alexandria, including the grand Carlyle House mansion built in 1753, the most elegant residence in the city. Emma had five sisters and three brothers. Her brothers lived in town and worked in the family’s farming, furniture and hotel businesses.

Emma Green received an excellent education in the 1850s at Mrs. Kingsford’s Seminary for Young Ladies in Washington DC. In September 1858 Emma and her sister Alice started school at one of the female academies in Alexandria. In 1860 Alice died after a sudden and unexpected illness and other members of their extended family.

In the years leading up to the American Civil War, Emma and her family sometimes stayed at the hotel, or Carlyle House, or at their country home, Oak Grove – only three miles from town. When the War began, most of the older Green children had married and moved away from Alexandria. Emma, her older brother James, and her parents were the only ones left in Alexandria.

Life was good until the war changed everything.

The Coming of War
With his diverse business interests in Alexandria, James Green initially supported the North. However, after the Union Army marched into Alexandria and permanently stationed troops there, he transferred their loyalty to the Confederacy. Union officials constantly pressured Green to sign an oath to the Union.

In early November 1861, James Green received a notice from Union officials that he had three days to vacate his hotel. On December 1, 1861 the Union Army opened the Mansion House Hospital for wounded Union soldiers. With its 500 beds, the converted hotel was the largest of the confiscated buildings used as military hospitals in Alexandria. 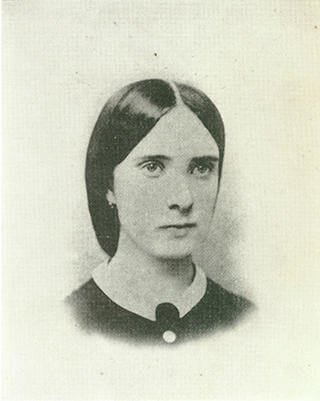 At the end of 1861, Emma was in Indiana with her sister Lydia, but she returned to Alexandria sometime in 1862. There, she probably would have lived with her parents in the Prince Street house that her father purchased in 1839. It is doubtful the military authorities allowed the family to remain at Carlyle House, which was only steps away from the federal army’s Mansion House Hospital.

Nurses at Mansion House Hospital
Eighteen-year-old Emma Green fought with her parents until she received permission to do nursing work at the Mansion House Hospital. She worked alongside another nurse assigned to that hospital, Mary Phinney. In her autobiography, Adventures of an Army Nurse in Two Wars, Phinney wrote:

Such a sorrowful sight; the men had just been taken off the battle-field, some of them had been lying three or four days almost without clothing, their wounds never dressed, so dirty and wretched. Some one gave me my charges as to what I was to do; it seemed such a hopeless task to do anything to help them that I wanted to throw myself down and give it up. Miss [Dorothea] Dix [Superintendent of Army Nurses] left me, and soon the doctors came and ordered me to follow them while they examined and dressed the wounds. They seemed to me then, and afterwards I found they were, the most brutal men I ever saw.

Frank Stringfellow, Confederate Spy
Two of Emma’s sisters – Mary and Jane Eliza – had married sons of the Stringfellow family of Raccoon Ford near Culpeper, Virginia. Emma must have known brother-in-law, Frank Stringfellow since they were children. By the time she was sixteen, Emma and Frank were a match.

Following his graduation from Alexandria’s Episcopal High School, Stringfellow traveled to Mississippi and was teaching Greek and Latin there when the Civil War began. He immediately returned to his native Virginia to join the Confederate Army. He was refused by multiple units because of his small stature – he stood at five-foot-seven and weighed barely 100 pounds. To prove his potential value, he entered a Confederate encampment and captured three guards whom he marched to their commanding officer and presented as his prisoners.

The Confederate States of America Army then accepted Stringfellow’s application, and his reputation soon caught the attention of J.E.B. Stuart, who asked Stringfellow to be his personal scout. After Stuart was killed in May of 1864, Frank reported directly to General Robert E. Lee. Frank worked for Lee before and during the Wilderness Campaign in May 1864 where Frank claimed he was close enough to spy on Grant and overhear him speaking with his staff.

Frank Stringfellow became quite well known during the War. His enemies called him “the most dangerous man in the Confederacy.” His ability to blend in, obtain the information needed, and return to report what he had learned came to the attention of cavalry commander, General J.E.B. Stuart, who asked him to serve as his personal scout. When he was on assignment in Alexandria, he cretainly made time to see Emma.

The Green family was fortunate enough to have their properties returned to them after the war; they soon reopened the Mansion House as a hotel, but it never returned to its former glory. Alexandria diarist, Henry Wittington, described James Green Sr.’s predicament with his hotel:

One of the greatest sufferers by the present occupation of Alexandria by the Hessians is Mr. James Green. … Just after the Battle of Bull Run they occupied his Hotel (the largest and finest in the City) and after abusing it most shamefully left the premises in such disorder, as to require great repairs and months of cleansing, and he had scarcely reopened it when they demanded its evacuation to which he was compelled to accede, and voluntarily offered him a large rent, but was told, upon the first months rent coming due, that his rent money was ready whenever he would take the oath of allegiance to the U.S. Of course, the rent remains unpaid.

After General Lee had surrendered his troops to General Ulysses S. Grant in early April 1865, Emma Green began to look forward to life with her fiance Frank Stringfellow. Emma’s sister Jane had already married Frank’s brother, Robert, who was an Episcopal priest; her sister Mary had married Frank’s cousin, Horace Stringfellow, also a priest. However, by the war’s end, there was a $10,000 reward out for his capture, and Stringfellow escaped to Canada for a time. 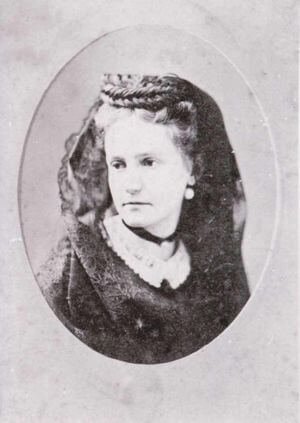 Marriage and Family
Frank Stringfellow returned to the United States and married Emma in 1867, with whom he had four children: Ida (born 1867), Alice Lee (1871), Frank (1881) and John Stanton (1883). He then enrolled at the Virginia Seminary and was ordained as an Episcopal priest in 1876, enlisting as a chaplain in the Spanish-American War at the age of 57.

Frank Stringfellow died of a heart attack June 8, 1913. Emma lived on until March 24, 1929. They are buried side by side in the Ivy Cemetery in Alexandria, Virginia